Haraamkhor (‘The Wretched”) is a story about a schoolteacher, Shyam (Nawazuddin Siddiqui), and the complications around his extramarital affair with his young student, Sandhya (Shweta Tripathi). 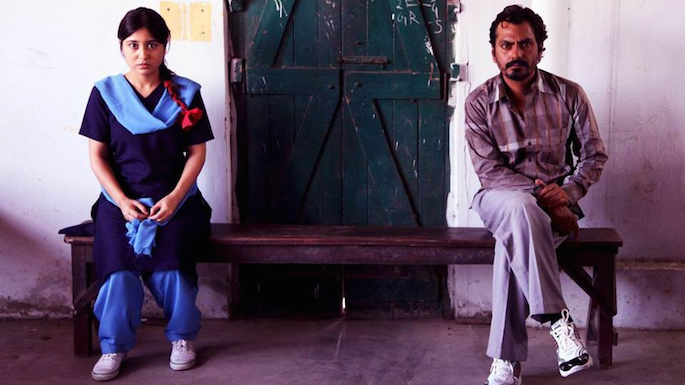 “Do you know how to write a love letter?” Mintu is seen asking his friend, Kamal, in one of the many incredibly light and funny exchanges between the two young characters in “Haramkhor,” which premiered at the 15th annual New York Indian Film Festival.

“Haraamkhor” (The Wretched) is a story about a schoolteacher, Shyam (Nawazuddin Siddiqui), and the complications around his extramarital affair with his young student, Sandhya (Shweta Tripathi). Their relationship is set against the foil of Mintu (Mohd Samad) and Kamal’s (Irfan Khan) friendship, who are Sandhya’s classmates. Kamal is in love with Sandhya, and though they are aware of her relationship with their teacher, Mintu spends much of the film helping his friend try to win her over- from stealing her shoes so Kamal can help her find them, to trying to write a love letter, to taking macho ‘hero’-type selfies for her. Their innocent and fiercely loyal friendship serves as a moral and rational backdrop for the uncomfortability of the taboo relationship between Shyam and Sandhya. As their affair becomes more serious, and far more dangerous, it is further complicated by Shyam’s wife’s inkling that something is going on, and Sandhya’s father, who is a police officer with a secret of his own.

“Haraamkhor” is one of those movies where you don’t realize you’ve been holding your breath for over an hour until the final credits roll. It’s a slow boil, with Siddiqui’s crafty wickedness both confusing and enthralling the audience, and Samad’s smooth delivery of humor providing plenty of laughter and lightness.

The viewer is waiting for what feels like the inevitable- for someone to find out about the affair and intervene, for Sandhya to stand up for herself, for Shyam to grow a conscience, for Kamal’s childish love to be seen and heard, and for Mintu’s practical jokes to finally land. It is a testament to Director Shlok Sharma’s direction that there are such tangible buildups in such a simple storyline- and yet none of it resolves the way the audience might expect, if at all. Led by Siddiqui’s extremely precise and natural acting, which bagged him NYIFF’s Best Actor Award, all the other actors, including the children, shine in humanistic ways.

In the end, it’s hard to say who or what the title refers to- is it Shyam, in all his manipulative and exploitative creepy ways; or is it Mintu, whose childish devilishness is both endearing and somewhat troublesome; or is it in fact Kamal, whose innocent love and loyalty push his passivity to the brink of anarchy? This is the magic of “Haraamkhor”- the wretchedness is apparent and alive in aspects of all the characters, as well as the circumstances of their environment that interweave their lives and bring out some of the ugliest sides of the human condition.