In continuing his launch worldwide, he has started an online store full of his related artwork, and it’s all kinds of glorious.

A Sikh Captain America sounds much like a dream. A fantasy of sorts about a Bollywood superhero film actually done right. However, Vishavjit Singh has turned his one thought into a much bigger, more approachable reality for not just Sikh-Americans or Indian-Americans, but for people across the world who feel a little more represented through his work.

“Marvel’s comic book-turned-silver screen superhero is a favorite. Captain America is bold and loyal and idealistic. Sikh Captain America is no different. When Singh created this 2-D image in 2011 to present at New York Comic-Con, he had no idea the impact his design would have. Brazilian-American Fiona Aboud loved his work. Inspired by her talent, Singh collaborated with her to bring his character to life, dressing up as Sikh Captain America himself.

Five years have given him great amounts of support and love from his fans, globally. So now, Singh has decided to give them something personal to hold on to. In continuing his launch worldwide, he has started an online store full of his related artwork, and it’s all kinds of glorious. His witty quotes, logos, creations are available on t-shirts, journals, bags, pouches, cards, throw pillows, duvets, and more.

“This is something that came from fans of my work asking me about Sikhtoons merchandise. Finally, I decided it was time to listen to them and create this online store,” Singh said. “I hope the response to it is as enthusiastic as the response to my work.” 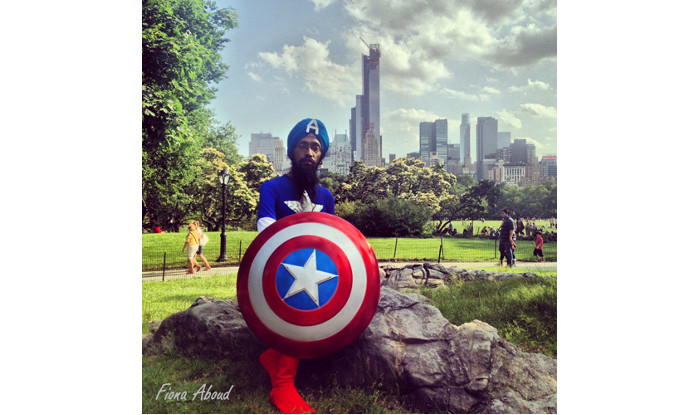 What makes his work unique is his interpretation of our current events and his depiction of them from the lens of a Sikh-American. “There is familiarity yet innovation, on a cerebral level,” he said of the illustrations he creates. “I want turbaned characters to be seen from a new lens that re-defines them as a native to our cultural existence.”

Singh never imagined such a successful future for Captain Sikh America when he began five years ago. “As a concept and manifestation through images, videos, this superhero has brought countless messages of love, affection, and support from strangers across the globe. That is what gives me hope for humanity.”

We break down the best products out of all the great ones that you have to get your hands on, whether its in the form of laptop and phone covers, spiral notebook covers, postcards, hoodies and more. 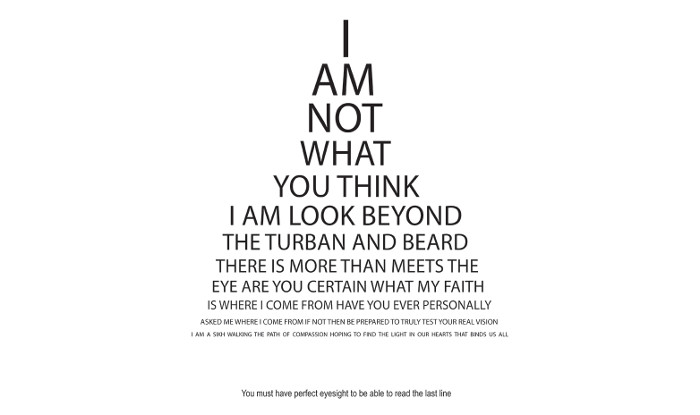 “I am not what you think I am, look beyond the turban and beard…” This lovely quote continues in the shape and format of an eye chart. Singh believed it is very relevant now as much as it was when he first made it, a year after 9/11. “It is a reminder to fellow citizens that we cannot judge each other by our countenance. There is way more than what meets the eyes,” he said. 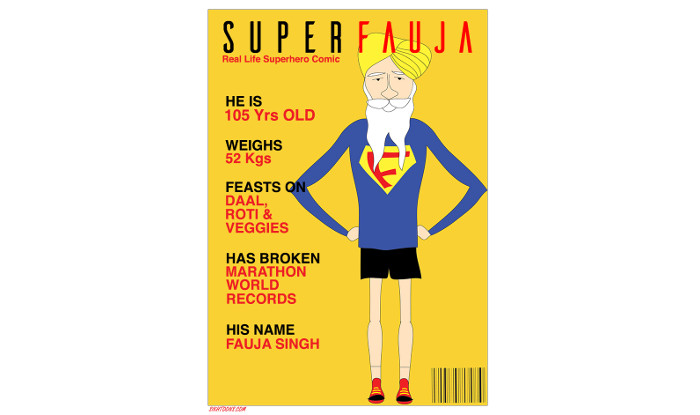 British-Sikh centenarian marathon runner, Fauja Singh holds a world record in his age bracket. He is 105-years-old! He started running in his late 80’s. For Vishavjit Singh, designing this fictional cover which looks at Fauja as a superhero, it was so anyone could relate to him and the success he has achieved. 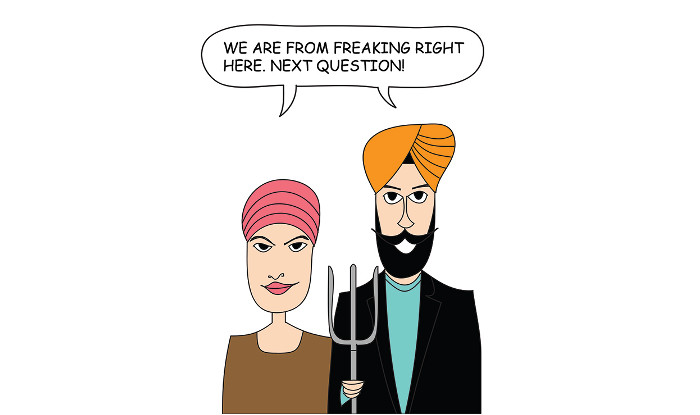 “This one hits the mark immediately for Sikh-Americans,” Singh said of his American Gothic piece which features a couple quoting “We are from right here. Next question,” in reference to the fact that second-generation citizens are often asked where they are from even though they were born and brought up in the United States. 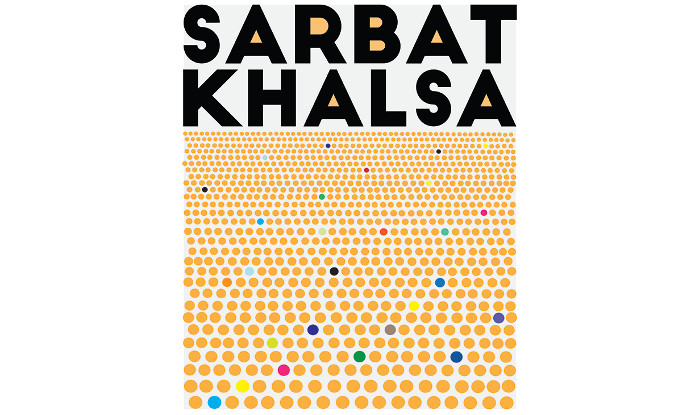 “This is one of my favorites since it has a personal connection to my imagination of a grand Sikh gathering with a sea of saffron turbans,” Singh said. In this illustration, you think you see nothing but big circles put together. In reality, they are a bunch of turbaned men hanging out. 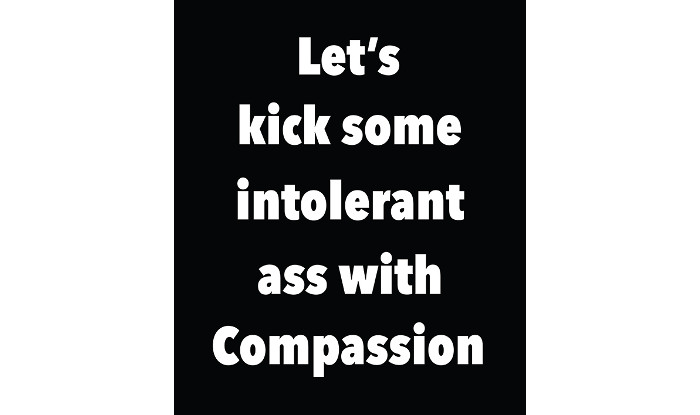 Let’s Kick Some Intolerant Ass with Compassion. That is one bold statement. Singh thought of it and put into his artwork during the RNC convention. The presidential election in 2016 has caused issues such as racism, xenophobia, bigotry, intolerance to rise on the surface and fully bubble up. A powerful, emotional quote can be inspiring in many ways. “I created for my trip to the RNC convention in Cleveland in July. It personifies my belief in compassion as the most powerful emotion in the human armor,” he said. 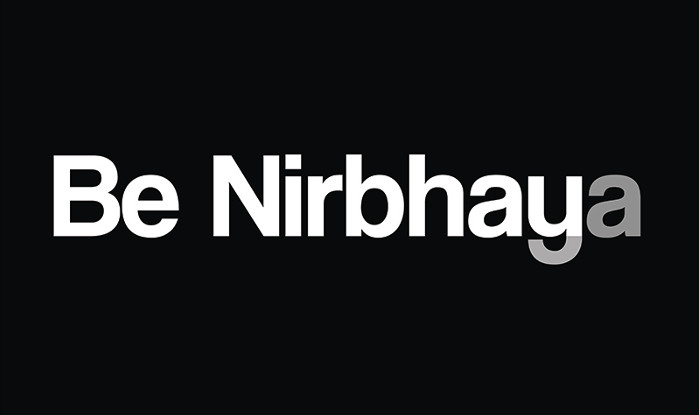 This one speaks for itself. Singh said that he inspired by the horrible sexual assault on the young woman in Delhi on a moving bus in December 2012. She came to be known as Nirbhaya (fearless). “This illustration is a dedication to the feminine body and spirit that creates and nurtures human life,” he said. 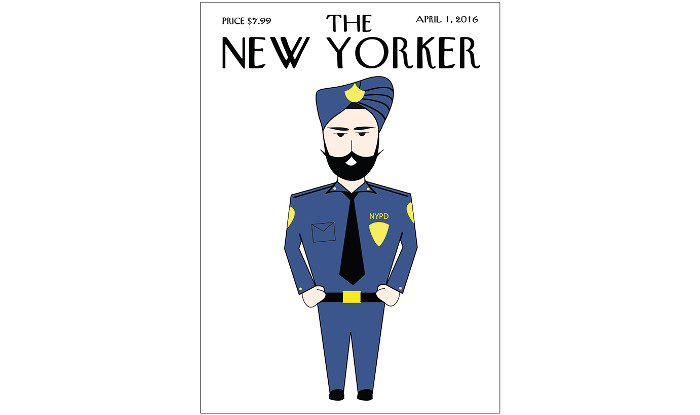 Who doesn’t love reading New Yorker? In his illustration, Singh places a Sikh worker on the cover of this well-known magazine. “It is a response to the intransigent and myopic policy at NYPD and many police departments across the US, banning men and women with religious head coverings to serve their communities,” he said. He added that he believed this is a vision that will become our reality in the near future. 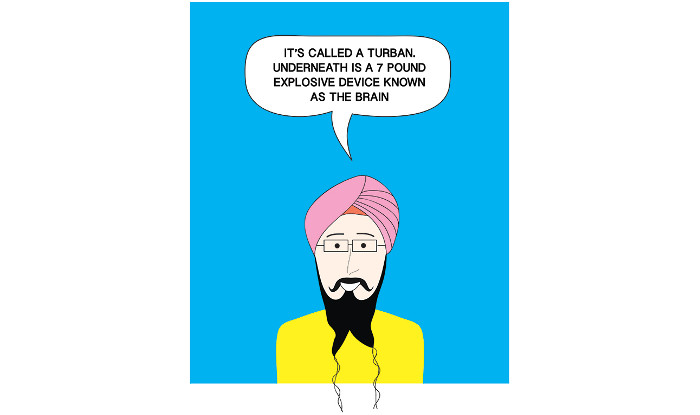 Many have wondered the answer to this question. Most have made up a random answer in the head, believing it to be true. That is why Sikh’s illustration perfectly describes the answer. Singh said that it is his edgy response to some fellow Americans and others who fear the turban and, therefore, create a ghostly vision of what lies underneath. 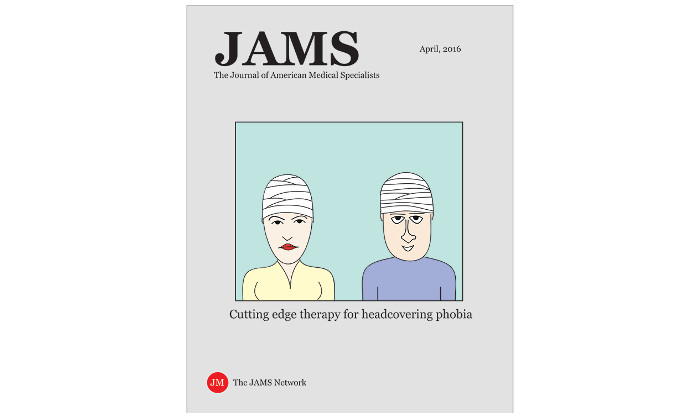 “This illustration connects the days from my undergraduate and graduate education in biological sciences to the present day reality of people having fear of religious head coverings,” Singh said as he described his artwork wherein two people have just had brain surgery, or so it looks. “The only way perhaps one can understand what I go through in my turban is to don head coverings themselves.”