The torch was first lit Aug 9 in New Delhi at the National Stadium, the first hosts of Asian Games in 1951, to show the torch's history and legitimacy. 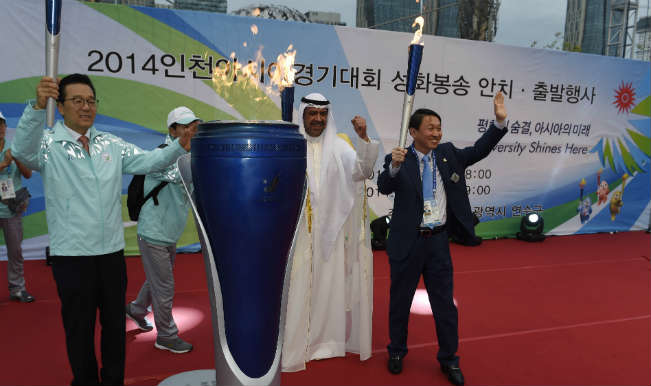 Incheon (South Korea), Sep 17: The torch that will be used to light the main cauldron at the opening ceremony of the 2014 Asian Games arrived here Wednesday. After a 36-day torch relay throughout South Korea, the flame will travel around Incheon’s downtown and arrive at the main stadium in Incheon for the Friday’s opening ceremony, reports Xinhua. Also Read - I Regret Becoming a Cyclist, All I Now Want is my Old Life Back: Swaran Singh

The torch was first lit Aug 9 in New Delhi at the National Stadium, the first hosts of Asian Games in 1951, to show the torch’s history and legitimacy. It was then combined with another flame that was set alight from Manisan, Ganghwa-do. It has travelled through 70 cities and towns across the host country and is about to complete its long journey. The torch, embodying the Asian continent’s hope for peace and harmony, was designed after a crane, the official bird of the hosting city of Incheon. Also Read - Living in Abject Poverty, Former India Cyclist Working Night Shift As Security Guard With Daughter Battling TB

All 45 member NOCs of the Olympic Council of Asia will participate in the 16-day event, vying for 439 gold medals in 36 sports. The torch relay started Aug 9 with a colourful ceremony in Delhi. The Incheon Asian Games organising committee flew the flame in a specially designed container to Weihei in China, which had hosted the 2010 Asian Games in the city of Guangzhou.

From Weihei it was ferried across to Incheon. In parallel, another torch was lit at Mount Mani at Ganghwa Island, off Incheon’s coast. It was the first time that the torch relay started from the National Stadium. In the past the torch was generally lit at the host country but from now on the Olympic Council of Asia (OCA) will be continuing with this tradition for all the Asian Games.

The Asian Games will be held in Incheon from Sep 19 to Oct 4. South Korea would be hosting the Asian Games for the third time after 1986 and 2002.