Asian Games 2014: A glance at the 11 medalists who made India proud on Day 8 in Incheon

Indian men's squash and archery team did a fabulous task to give India the much needed gold medals to improve their rankings. 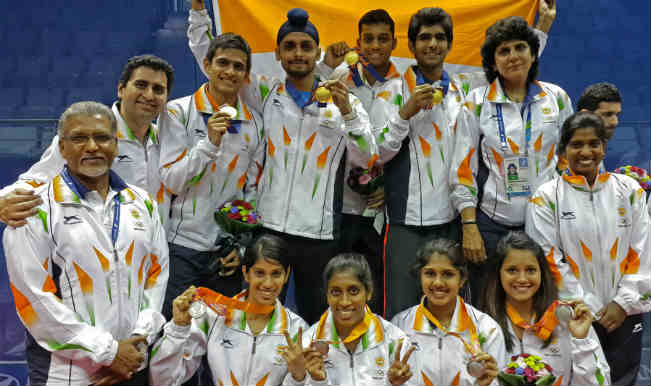 India at the end of Day 8 of the 17th Edition of Asian Games find themselves on the 11th place of the medal table with their medal tally touching 28. Their medal tally includes 3 gold, 5 silver and 20 bronze – addition of 11 medals on Day 8 of Asian Games in Incheon taking India to 11th rank from 16th. Indian men’s squash and archery team did a fabulous task to give India the much needed gold medals to improve their rankings. Apart from the medals won, India have also assured many more in line by qualifying for the medal events. On the glorious and best day of Asian Games so far, we take a look at the proud medalists who made India proud: Also Read - Schools Reopening From Monday | What Back to Classes Might Look Like Amid Pandemic

India’s Abhishek Verma won his second medal of the day, the silver in the men’s compound archery individual, after losing the final of the 17th Asian Games at the Gyeyang Asiad Archery Field here Saturday. Verma, who earlier in the day won gold in the team compound event, lost 141-145 to Iran’s Esmaeil Ebadi to finish second.

The 25-year-old Chain Singh, gave India their ninth medal from the shooting range as he finished third in the 50 metre rifle 3 positions event of the 17th Asian Games here Saturday. Chain scored 441.7 at the Ongnyeon International Shooting Range to take home the bronze as China claimed the top two places with Cao Yifei and Zhu Qinan, who won gold and silver respectively.

The Indian women’s squash team settled for the silver medal after losing to defending champions Malaysia 0-2 in the final of the 17th Asian Games at the Yeorumul Squash Courts here Saturday. Anaka Alankamony and Dipika Pallikal lost their respective matches in straight games to Malaysian players as India had to be content with finishing second.

India’s Trisha Deb won her second bronze medal of the day by beating Chinese Taipei’s Joun Huang in the women’s compound archery individual event of the 17th Asian Games at the Gyeyang Asiad Archery Field here Saturday. Trisha, who earlier in the day won bronze in the team compound event, defeated Jou Huang 138-134, to add another medal to her kitty.

The Indian women’s trio of Trisha Deb, Purvasha Sudhir Shende and Surekha Jyothi gave India their first medal from the archery field here Saturday as they prevailed over Iran in the bronze medal match of the compound event of the 17th Asian Games. The Indian team, which lost to Chinese Taipei in the semi-final Thursday, shot 224 while the Iran’s team of Sakineh Ghasempour, Maryan Ranjbarsari and Shabnam Sarlak scored 217.

India were in for a pleasant surprise as Lalita Babar’s bronze be upgraded to a silver while her compatriot and defending champion Sudha Singh, who had finished fourth, will be the bronze medalist following the possible disqualification of gold medal winner Bahrain’s Ruth Jebeth in the women’s 3000 metre steeplechase on the first day of the track and field competition at the 17th Asian Games here Saturday.