Asian Games 2014: A glance at the 8 medalists who made India proud on Day 9 in Incheon

India continued their winning momnetum from Saturday to Sunday on Day 9 in Incheon to take India's medal tally to 35 including 4 gold, 5 silver and 26 bronze. 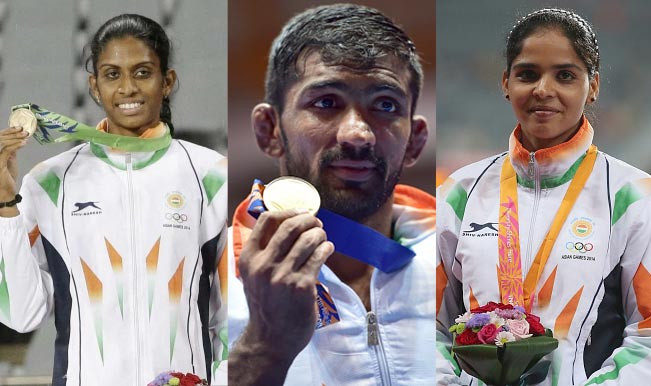 Yogeshwar Dutt wrestled his way like a true champion to lead India out of the rankings rut in Asian Games and bring it back in the top-10 of the medal standings of Asian Games 2014 on Day 9. He led from front to snatch the gold medal away from its opponents to give India its 4th gold medal of 17th edition of Asian Games. His efforts were well supported by players from other sporting events. From tennis, India settled with three bronze medal in form of Yuki Bhambri (men’s singles), Sania Mirza and Prarthana Thombare (women’s doubles) and Yuki Bhambri and Divij Sharan (men’s doubles) secured bronze medals. While, medals coming from the track and field events was icing the cake. In fact, the first medal of the day was bagged by young race walker Khushbir Kaur winning silver medal. India continued their winning momnetum from Saturday to Sunday on Day 9 in Incheon to take India’s medal tally to 35 including 4 gold, 5 silver and 26 bronze. We take a look at the 8 medalist who made India proud with their impressive show: Also Read - Schools Reopening From Monday: What is Partial Resumption? Is There Any Compulsion to Attend Classes? FAQs Answered

Yogeshwar Dutt ended India’s 28-year-old wait for an Asian Games wrestling gold medal at the Dowon Gymnasium here Sunday. Yogeshwar, Olympic bronze medallist, put on a stupendous show in winning 3-0 in the title-clash against Zalimkhan Yusupov of Tajikistan. Yogeshwar’s gold in men’s 65kg freestyle was India’s first since 1986, when Kartar Singh had won the yellow metal in the Seoul Games.

Khushbir Kaur opened India’s medal account on day nine of competitions in the 17th Asian Games, finishing second to win the silver in the women’s 20 kilometre race walk at the Race Walking Course here Sunday. The Indian athlete finished two minutes and a second behind China’s Xiuzhi Lu with a total time of an hour 33 minutes and seven seconds.

India’s Yuki Bhambri settled for the bronze medal, losing to Japan’s Yoshihito Nishioka in the men’s singles semi-final of the 17th Asian Games at the Yeorumul Tennis Courts here Sunday. Bhambri, seeded fourth, lost 6-3, 2-6, 1-6 to the Japanese fifth seed in an hour and 44 minutes.

The Indian men’s tennis doubles pair of Yuki Bhambri and Divij Sharan settled for the bronze medal in the 17th Asian Games at the Yeorumul Tennis Courts here Sunday. The Indian pair lost the semi-final match 7-6 (10-8), 6-7 (6-8), 9-11 in the super tie-breaker to the South Korean pair of Yongkyu Lim and Hyeon Chung.

India’s Manju Bala won the bronze medal in the women’s hammer throw in the 17th Asian Games at the Incheon Asiad Main Stadium here Sunday. Manju threw the hammer to a distance of 60.47 metres in her first attempt to win the bronze. The gold and silver went to China’s Wenxiu Zhang (77.33m) and Zheng Wang (74.16m) respectively.

Rajiv Arokia today bagged a surprise bronze in men’s 400m race in a personal best timing on the second day of the athletics competitions in the Asian Games here today. Arokia clocked a creditable 45.92secs to better his earlier best of 46.13secs which he clocked at the National Inter-State Championships in Lucknow in June. Arokia’s effort today was the seventh best ever by an Indian.