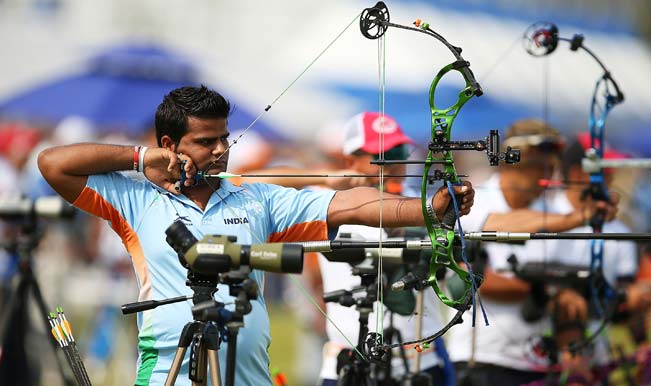 Incheon, Sep 25: The Indian men’s compound archery team set-up a final date with South Korea after it beat Iran 231-227 in the semi-finals of the 17th Asian Games at the Gyeyang Asiad Archery Field at Incheon on Thursday. The Indian trio of Abhishek Verma, Sandeep Kumar and Rajat Chauhan, managed a total of 15 10’s and got a score of 231 from 24 shots. Also Read - Ladakh Standoff: 13 Hours of Marathon Talks Between India, China Fail to Bring Any Breakthrough, Claim Reports

The Iranian team, comprising Esmaeil Ebadi, Majid Gheidi and Amir Kazempour, had 14 10’s for a total of 227. What hurt the Iranians was a poor seven in the second set and an eight in the penultimate shot. In the other semi-final, South Korea just managed to edge past the Philippines 228-227 in what was a closely contested event. The South Korean team of Yonghee Choi, Lihong Min and Youngho Yang got a total of 12 10’s while the Filipino trio of Ian Patrick Chipeco, Paul Marton Dela Cruz and Earl Benjamin Yap had 13 10’s. Also Read - International Flights: Now Indians Can Fly to Japan, UK, Canada And 10 Other Countries | Who is Allowed & Who is Not? Read Detailed SOPs

Earlier in the day, the Indian team defeated Qatar in the round of 16 elimination and then beat Malaysia in the quarterfinal.  The Indian team defeated Qatar 233-218. India had 17 10’s and 10 X’s (number of inner 10’s) to Qatar’s 10 and five respectively. The Qatar team comprised Khader Abdulqawi Abdurabu, Ahmed Abdulla Alabadi and Abdulaziz Ahmed Alobadi. In the semi-final, India beat Malaysia 234-229. The Malaysian team of Kin Lip Lee, Muhammad Zaki Bin Mahazan and Mohammed Juwaidi Bin Mazuki got 14 10’s and five X’s. India got 18 10’s and 10 X’s in their score of 234. Also Read - India's COVID-19 Tally Nears 55 Lakh-mark, Deaths Stand at 87,882 | Key Points