Indian girls had earlier lost the semi-finals by a slim margin of 224-226 against Chinese Taipei on Thursday to set up a bronze-medal play-off with Iran. 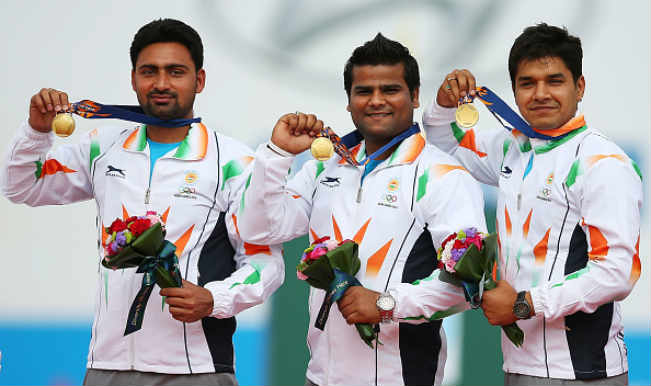 Incheon, Sep 27 :  India earned their second gold medal in the 17th Asian Games after the men’s compound archery team bagged the yellow metal by getting the better of South Korea, here today. The Indian women’s compound team, meanwhile, settled for a bronze after beating Iran in the third-place play-off. The Indian men’s trio of Abhishek Verma, Rajat Chauhan and Sandeep Kumar eked out a narrow 227-225 victory over the hosts to give the country their second gold medal in eight days. Also Read - Ladakh Standoff: India, China Hold Sixth Round of Corps Commander-Level Talks at Moldo

Shooter Jitu Rai had earned the top position on the first day of the competition. In a closely-fought contest today, the South Korean team of Choi Yong-hee, Min Li-hong and Yang Young-ho fell short by just two points, even as the Indians held on to their nerves to win an all-important battle. Indian men had 12 10s as compared to 13 by their opponents. Also Read - Schools Reopening From Monday: What is Partial Resumption? Is There Any Compulsion to Attend Classes? FAQs Answered

Earlier, the Indian women’s team consisting of Trisha Deb, Purvasha Shende and Surekha Jyothi shot 224, while Sakineh Ghasempour, Maryam Ranjbarsari and Shabnam Sarlak of Iran could earn a total of 217 points. Both Indian and Iranian girls had a total of nine 10’s each at the Gyeyang Asiad Archery Field here. Indian girls had earlier lost the semi-finals by a slim margin of 224-226 against Chinese Taipei on Thursday to set up a bronze-medal play-off with Iran.