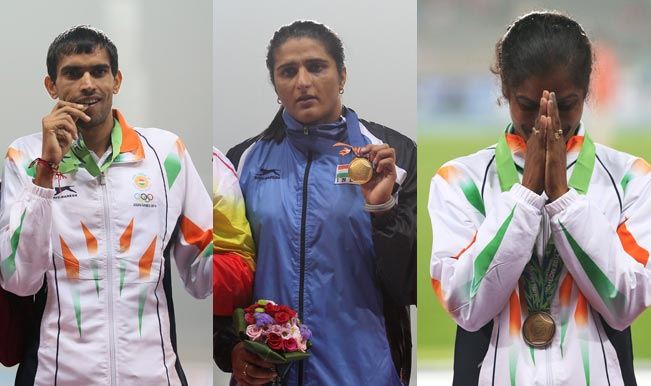 Incheon, Sep 29: Discus thrower Seema Punia Antil ended India’s gold-less streak in track and field events on the third day of athletics competitions as she beat back a strong challenge from two Chinese rivals to bag the coveted yellow metal at the Asian Games here today. Seema ran away with the gold with a best throw of 61.03m in the women’s discus throw final while team-mate Krishna Poonia finished fourth with a below par 55.57m at the Incheon Asiad Main Stadium here. Also Read - COVID-19: With Spike of Over 96,000 Cases, India's Tally Crosses 52-Lakh Mark, Deaths Near 85K

Prior to Seema’s golden throw, women’s metric miler O P Jaisha and men’s 3000m steeplechaser Naveen Kumar picked up a bronze each to boost the country’s medal tally from athletics to eight from three days. 31-year-old Seema, who did not participate in the last two Asian Games and who came here after winning a silver in the Glasgow Commonwealth Games, took the lead with her very first throw of 55.76 before coming up with her best effort with a throw of 61.03m off her fourth attempt. Also Read - Trump Identifies India, 20 Other Nations As Major Drug Transit Or Major Illicit Drug-Producing Countries

China’s Lu Xiaoxin took the silver in 59.35m while her compatriot Tan Jian, who finished sixth in the last two World Championships, bagged the bronze with a throw of 59.03m. Seema, who became emotional during the medal ceremony, told reporters that she had been waiting for this moment over the last three years.

“I am very happy to get the gold which I expected to win today. I have trained for this gold over the last three years. I had waited for this after missing the last two Asian Games. I usually don’t perform well in my first throw. But I followed my coach’s instructions today to hurl the disc past the 55m mark with my first attempt,” she said.

She said her silver medal in the Glasgow CWG “motivated me to go for the gold here.” Asked whether the damp weather conditions affected the athletes in any way, she said, “I wish I had brought two extra pairs of shoes.”

Kerala-born Jaisha won the bronze in the women’s 1500m while army athlete Naveen Kumar stood third in the men’s 3000m steeplechase as Indians bagged three medals on the third day of the competitions in the blue-riband discipline. The diminutive Jaisha did some fine front running after the others, including two-time gold medal winner and defending 1500m champion Maryam Yusuf Kamal of Bahrain, preferred to stay back and come up with a strong finish later.

The Indian runner, married to Punjab-based coach Gurmeet Singh, was leading the bunch till just before the start of the final lap when silver winner Mimi Belete, the gold medallist in 5000m in 2010, made the move and overtook Jaisha. Undeterred, Jaisha hung to the lead runner’s heels on the back straight but on the second last curve lost some pace even as eventual winner Maryam came up on her and overtook the Indian prior to the last bend in the race.

Jaisha tried her level best to catch up to the lead runners without success even as Maryam, bronze medal winner in 2012 London Olympic Games and a former two-time world champion earlier, made a final kick and surged into the lead to take the gold ahead of compatriot Mimi in 4:09.90.
Mimi clocked 4:11.03 and Jaisha crossed the line in 4:13.46. Jaisha has a personal best of 4:19.14, clocked in the Federation Cup at Patiala last month.

Jaisha later said it was thanks to India’s re-appointed middle and long distance coach Dr Nikolai that she could get the medal, her second after a bronze in 2006 Doha Asian Games.

“For the last few years, the middle and long distance were a zero without Dr Nikolai. It’s because of his advise to set the pace if the others did not that I got the medal. It was a 5000m pace that was set earlier by those who have been world champions. I wanted to win a medal here and I am happy that I have won my second medal in the Asian Games. I am not at all disappointed I missed out on the silver,” she said.

The 29-year-old runner, who is settled in Punjab now, said the high altitude training she had done first in Dharamsala with her coach-cum-husband Gurmeet and the subsequent one at Wellington near Ooty had helped her a lot.

Kumar, a army havaldar and hailing from Chhapar in Haryana, picked up the bronze in the steeplechase with a personal best of 8:40.39, and later said he had spent money of his own to train for the Games after his name had been dropped from the national camp.

“Now I will get promotion to naik subedar. I will try to qualify for the World Championships and the Military Games next year,” the 24-year-old athlete said. Other Indian athletes, however, fared poorly. In the men’s high jump, Nikhil Chittarasu performed below his season’s best of 2.21m and cleared 2.15m in his third attempt after leaping over 2.10 in his second. He failed to clear 2.20m in all three attempts.

In women’s long jump, India’s M A Prajusha and Mayookha Johnny finished eighth and ninth respectively from 12 starters, clearing 6.23m and a very modest 6.12m respectively. Prajusha’s was her personal best while Mayookha’s was ordinary by her standards. The gold surprisingly was won by Bui Thi Thu Thao of Vietnam with a best effort of 6.44m, while the silver and bronze were claimed by China’s Jiang Yenfei (6.34m) and Bae Chanmi of Korea (6.34m).