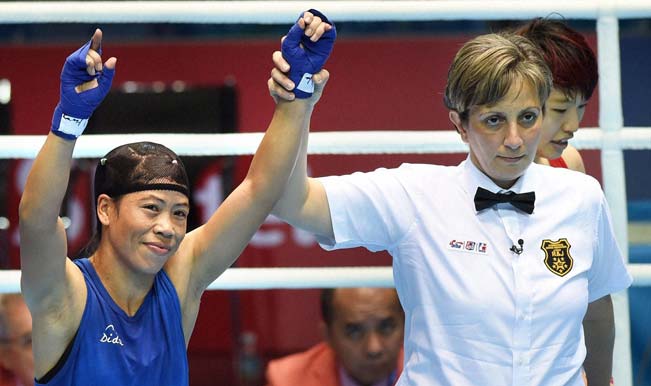 Incheon, Sep 30: India’s M.C. Mary Kom secured a berth in the gold medal bout of the women’s flyweight (48-51kg) after a convincing win in the semi-final of the 17th Asian Games here on Tuesday.  The 31-year-old Indian beat Vietnam’s Le Thi Bang by a unanimous 3-0 decision to enter the final. Also Read - Imran Khan UNGA 2020 Speech Almost Replica of 2019 litany

Catch the Live Updates of Day 11 of Asian Games 2014, Incheon here Also Read - Leader of Pakistan Called For Action Against Those Who Incite Hate, Was he Referring to Himself? India at UNGA

The five-time world champion was in fine form and her speed and guile was just too much to handle for the Vietnamese fighter. Mary Kom peppered her opponent with multiple combination punches and didn’t give her anytime to gain a foothold. Le went for broke in the fourth and final round and managed to connect a few punches but with the Indian, having already won the previous three rounds there was very little the Vietnamese could do.