The boxer on the comeback trail and with heaps to prove would be five-time world champion and London Olympics bronze medallist M.C. Mary Kom. 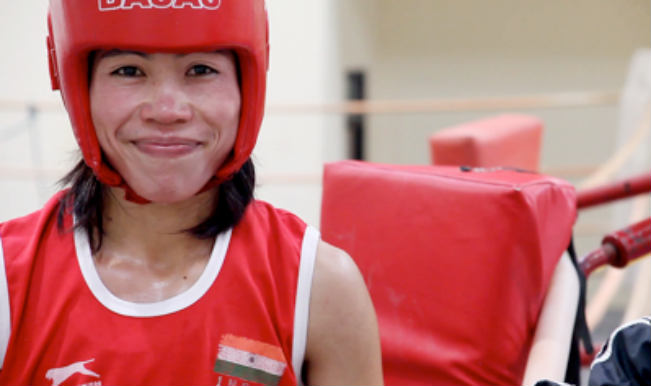 New Delhi, Sep 16: With a new federation in place, Indian boxers will be looking to regain some pride at the 2014 Asian Games starting Friday in the South Korean city of Incheon. The Indian boxers had suffered a lot as the Indian Boxing Federation (IBF) was derecognised by the international body AIBA in March after being suspended for more than 12 months. They were denied overseas tours as none, including old ally Cuba, were unwilling to host them, for fear of attracting the ire of the AIBA. Also Read - Indian Boxing Team Doctor Tests Positive For COVID-19

But with Boxing India, a newly-elected body that has been recognised by AIBA, Indian boxers, who were left in the lurch for nearly a year-and-half, can only hope for a better future with the Asian Games as a beginning. Last time, Indian boxers won nine medals, including two gold medals. This time anything close to nine would be considered a good show by the Indian boxers, who managed just five medals in the July-August Commonwealth Games. Also Read - Jawaharlal Nehru Stadium in New Delhi to be Redeveloped at a Cost of 7,850 Crore

The biggest name missing from the India’s boxing contingent is that of Olympic bronze medallist Vijender Singh, who won’t be defending his middleweight title after a hand injury ruled him out of the Games. Vijender had bagged the silver in Glasgow.

But for one man in particular, 33-year-old Akhil Kumar, who was written off following a string of injuries four years ago, the Asian Games could probably be the last throw of the dice and in all probability be his swansong in major international competitions.

The 2016 Rio Olympics is a far fetched dream for the 2006 Commonwealth Games gold medallist, who beat Vikas Malik and Rohit Tokas at the selection trials in Patiala, to book his berth for the Incheon Games.

Vikas Krishan Yadav, the second Indian to win bronze in the World Championships, will also shoulder the responsibility of securing the vaunted medal. But the 22-year-old is returning to the ring after a two-year hiatus and could be rusty. What may stand in good stead for the youngster is that he had won the gold medal four years ago. Hopes are also high from Devendro Singh and Mandeep Jangra, who had won silver medals in the Commonwealth Games.

Another boxer on the comeback trail and with heaps to prove would be five-time world champion and London Olympics bronze medallist M.C. Mary Kom. The 31-year-old lost out to Pinki Jangra in the trials for the 2014 Commonwealth Games in Glasgow and will look to set the record straight. She won the bronze medal in the 2010 Asian Games and in Incheon will be looking to better her record.

Like Mary Kom, her fellow statemate and former world champion Sarita Devi, has also set her sights on the gold medal. Sarita won the silver in the Commonwealth Games but this time in Incheon nothing less than a gold would satisfy her.