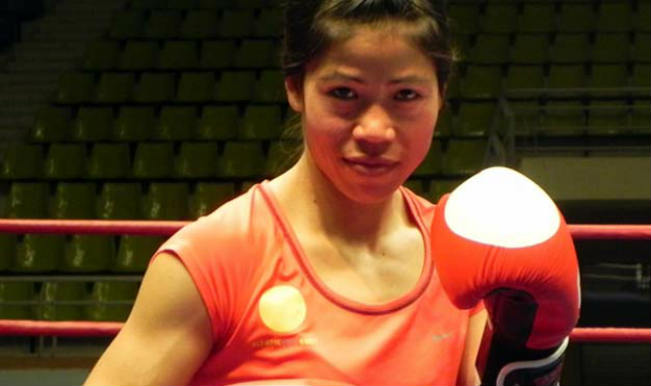 Incheon, Sep 27: Indian women boxers made a promising start to their Asian Games campaign with Mary Kom, L. Sarita Devi and Pooja Rani advancing to the quarter-finals of their respective categories at the Seonhak Gymnasium here Saturday. The 2012 Olympic bronze medallist Mary Kom registered a comprehensive 3-0 victory by a unanimous judges’ decision over Yeji Kim of South Korea in the fly weight (48-51kg) round of 16 match. She next plays China’s Haijuan Si in the quarter-finals Sunday. Catch the Live Updates of Day 8 of Asian Games 2014, Incheon here Also Read - Indian Boxing Team Doctor Tests Positive For COVID-19

Former World Champion Sarita Devi defeated Chungson Ri of North Korea 3-0 also by a unanimous judges’ decision in the lightweight (57-60kg) round of 16 contest. She will take on Mongolia’s Suvd Erdene Oyungerel in the quarter-final match Sunday. Also Read - Jawaharlal Nehru Stadium in New Delhi to be Redeveloped at a Cost of 7,850 Crore

In the middleweight (69-75kg) round of 16 bout, Pooja won 3-0 against Mongolia’s Undram Erdenesoyol again by a unanimous judges decision. She faces Chinese Taipei’s Dara Flora Shen Friday in her quarter-final match. Mary Kom, in blue corner, enjoyed considerable crowd support as they chanted her name. Buoyed by their support, Mary Kom began aggressively against her taller opponent and won the first round easily 10-9. Round two began in a similar fashion with Mary Kom landing a flurry of punches and pocketed the round 10-9, again by a unanimous decision.

Mary Kom used her vast experience to good effect, mixing round-arm punches with body shots and straight punches to keep her opponent on the back foot. She proved her supremacy in all areas, exhausting her opponent and wrapped up the contest comfortably in the third round. Mary Kom, five-time world champion, is the favourite to win gold in the women’s flyweight (48-51kg) category.