Asian Games 2014, Day 3 – A glimpse at India’s performance in Incheon as it happened

Currently standing at lowly 13th rank in the medal list with a total of 6 medals, India still has long way to go in the 17th edition of Asian Games. 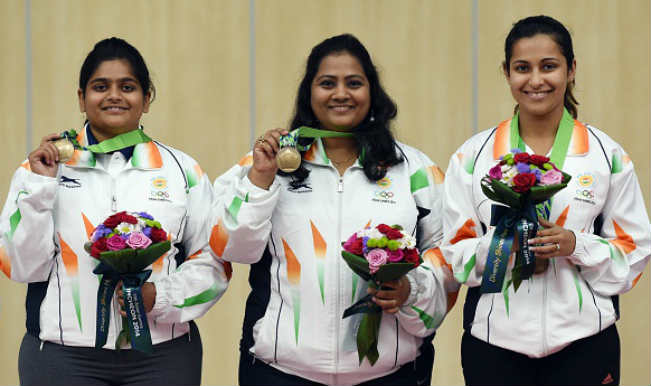 The Day 3 of Asian Games 2014 wrapped up with India adding two more bronze in its medal tally. Currently standing at lowly 13th rank in the medal list with a total of 6 medals, India still has long way to go in the 17th edition of Asian Games. On Monday, it was squash player Dipika Pallikal who became the first Indian woman squash player to win a bronze medal at Asiad. The day was also happy going for the shooters while Day 3 promised 3 more medals for the coming day in Incheon. But there were more chances where India squandered medal prospects from the sports like tennis, judo. We take a look at India’s performance at the 20 events of 10 sports they took part in on Day 3: Also Read - Coronavirus Creates Havoc: 3 MPs, 6 MLAs And Former President Among COVID's VVIP Victims

Men’s Singles Semi-finals: Top seed Saurav Ghosal defeated Ong Beng Hee of Malaysia in straight sets 11-9, 11-4, 11-5 to advance to his maiden Asian Games singles finals. The 28-year-old Indian already has three Asian Games bronze medals to his name — winning the bronze in singles in 2006, 2010 and a doubles bronze in 2010.

Women’s 25m Pistol Finals: Rahi Sarnobat finished seventh after becoming the only Indian to qualify for the semi-final of the individual event.

Men’s Team Group D Match: The men’s team is knocked out of the tournament after losing 12-47 to Japan in Group D to succumb to their third straight loss. The men’s team were beaten 20-39 by Chinese Taipei in their first group match and then went down 19-39 to South Korea.

Women’s Team Group A Match: Indian eves were also knocked out of the tournament after they lost to China 12-39. They were beaten in their first group match 11-47 by South Korea and tied their second match with Thailand 26-26.

Men’s Sanda-60kg quarterfinals: World No.9 Narender Grewal defeated Abdullah of Pakistan 2-0 to enter the medal round matches. He will face Philippines’ world No.3 Jean Claude Saclag in the semifinal match Tuesday.

Nangun and Nanquan: Lama Sajan finished 13th and tied ninth in nangun and nanquan competitions, respectively.
Lama scored 7.95 points out of 10 in nangun to take 13th position. The 22-year-old Indian bagged 4.60 points for quality of management, 2.40 for overall performance and 0.95 for degree of difficulty to gather 7.95 points.
In nanquan, he scored 9.06 points to share ninth position with Japan’s Koki Nakata.

India U-23 men’s campaign in Asian Games football ended Monday as they went down 0-2 to a superior Jordan side in the final Group G encounter here at the Munhak Stadium.

Rajwinder Kaur fell in the women’s +78kg category final of repechage round in the 17th Asian Games at the Dowon Gymnasium. She was defeated by Mongolia’s Javzmaa Odkhu in the +78 kg quarters and went into the repechage to fight for a place in the bronze medal match.

The Indian men’s basketball team registered their second win from three matches in the 17th Asian Games here Monday, defeating Kazakhstan 81-60 in a qualifying round Group B encounter at the Hwaseong Sports Complex Gymnasium.

The Indian women’s volleyball team lost 0-3 in a Group A preliminary round match of the 17th Asian Games at the Ansan Sangroksu Gymnasium here Monday. The Indian team, which had lost to South Korea in its opening encounter Saturday, was completely outplayed by their Japanese counterparts and lost 6-25, 11-25, 12-25 in 56 minutes.