India have a very good chance of winning at least one medal from sailing in the Games through the 29er women's duo of Varsha Gautam and Aishwarya Nedunchezhiyan. 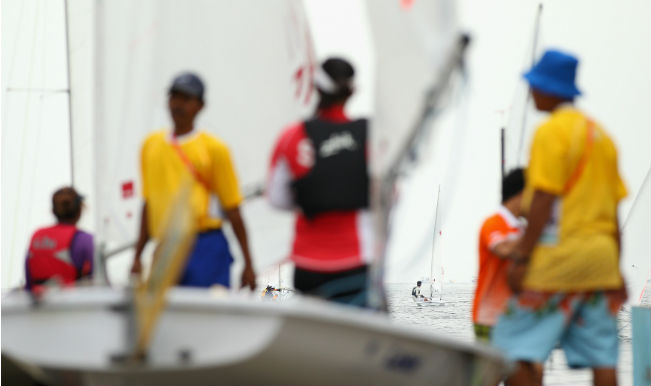 (Representative Picture of a sailing competition from Asian Games 2014)

Incheon, Sep 29:  Rain played spoilsport today as it affect the Asian Games yachting competition here and all the races, barring some in the match racing category, scheduled for today at the Wangsan Sailing Marina have been postponed. All those races will now take place tomorrow. “The races were cancelled today because of rains and no wind. The 11th race will be held tomorrow along with the last one in most categories that India is participating in. If there are any issues tomorrow, they will be held on October 1,” team manager Cdr. K D Singh told PTI. Also Read - Jawaharlal Nehru Stadium in New Delhi to be Redeveloped at a Cost of 7,850 Crore

India have a very good chance of winning at least one medal from sailing in the Games through the 29er women’s duo of Varsha Gautam and Aishwarya Nedunchezhiyan. “Unless something disastrous happens like they get disqualified, which is unlikely, they are headed for a medal,” said Singh, who added that India have no chance of winning a medal in the other categories in which they have entered, including men’s match racing. Also Read - I Regret Becoming a Cyclist, All I Now Want is my Old Life Back: Swaran Singh

Currently Varsha and Aishwarya are standing third from six teams with 22 penalty points against their name. The leaders are Singapore and Thailand with just one net penalty point separating them. In fourth place with 33 points against them are Malaysia and unless the Indians perform too poorly, they can expect at least a bronze medal from this class of boats. Also Read - Living in Abject Poverty, Former India Cyclist Working Night Shift As Security Guard With Daughter Battling TB