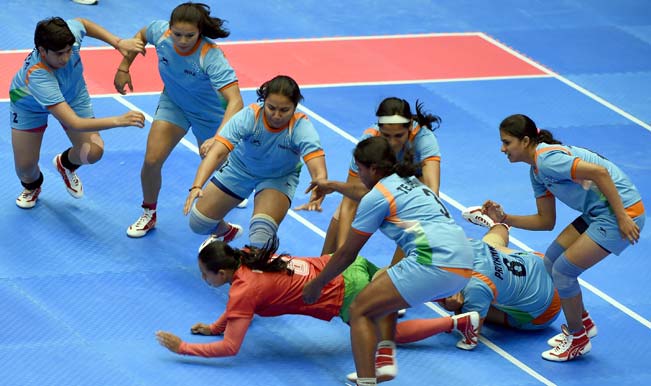 Incheon, Sep 28: India made a resounding start in Kabaddi competition of the 17th Asian Games with both the men’s and women’s teams thrashing Bangladesh in their opening preliminary round matches at the Songdo Global University Gymnasium here today. Indian women’s team was the first to get across their Bangladeshi counterparts as they trounced their neighbours 29-18 in a Pool A match. Also Read - Schools Reopening From Monday | What Back to Classes Might Look Like Amid Pandemic

The men’s team then brushed aside the Bangladeshi men 30-15 to start their campaign on a positive note in Pool A, which also consists of Thailand and Pakistan. In the men’s team, India dished out a dominating show as they pocketed a huge 10-point lead after finishing the first half 16-6 ahead. Though the Bangladeshi put up a slightly better show after the break but still India managed to end the second half with a 14-9 advantage. Also Read - COVID-19: With Spike of Over 96,000 Cases, India's Tally Crosses 52-Lakh Mark, Deaths Near 85K

The women’s match, on the other hand, rode on their brilliant first half were they zoomed to 22-5 at the interval. The Bangladeshi eves did turn the tables in the second half with a 13-7 scoreline but it was not enough to erase the first half deficit. The men’s team will be up against Thailand in their Pool A match tomorrow, while the Indian eves will take on Korea on Tuesday in their second and final Pool A tie.