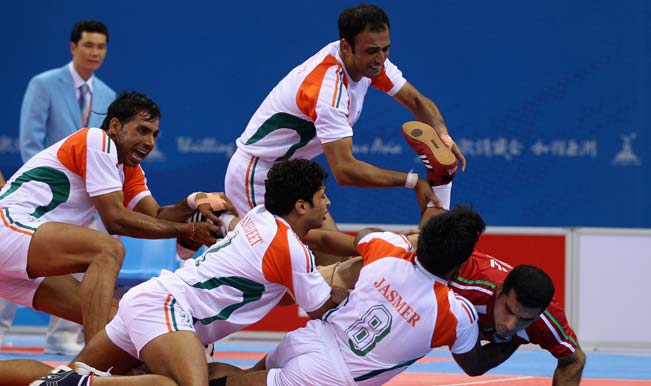 Incheon, Sep 29: Six-time champions India notched up their second successive win in the men’s Kabaddi competition after thrashing Thailand 66-27 in a Group A preliminary-round match at the 17th Asian Games, here on Monday. The Indian men’s team, which has won all five world cups played till now, dished out another dominating show to teach the Thai players a lesson or two in Kabaddi as they surged 29-15 ahead at the break and wrapped up the match after pocketing the second half 37-12. Also Read - Schools Reopening From Monday: What is Partial Resumption? Is There Any Compulsion to Attend Classes? FAQs Answered

The Indian team with a starting line-up of Rakesh, Anup Kumar, Manjeet Chillar, Ajay Thakur, Navneet Gautam and Rajguru Subramaniam, displayed vintage raiding skills and strong defensive tactics in the second half to claim 37 points compared to Thailand’s 12. The proof of Indian team’s aggression was the six lona points they clinched in the second half. They knocked out 26 Thai athletes and collected five bonus points to take first position in the group and also cement their place in the semi-finals. Also Read - COVID-19: With Spike of Over 92,000 Cases, India's Tally Surpasses 54 Lakh-mark; Recovery Rate Nears 80% | Key Points

India will take on Pakistan in their last league match on Tuesday with the winner deciding the first two places in the group stage. India are currently ahead of Pakistan and are also leading their arch-rivals thanks to greater points difference. The Indian women’s team, which also started their campaign on a winning note beating Bangladesh yesterday, will play against Korea tomorrow in their second and final Pool A tie.