The Rakesh Kumar-led men's team, which defeated Bangladesh and Thailand earlier, put in another dominating performance to trounce Pakistan. 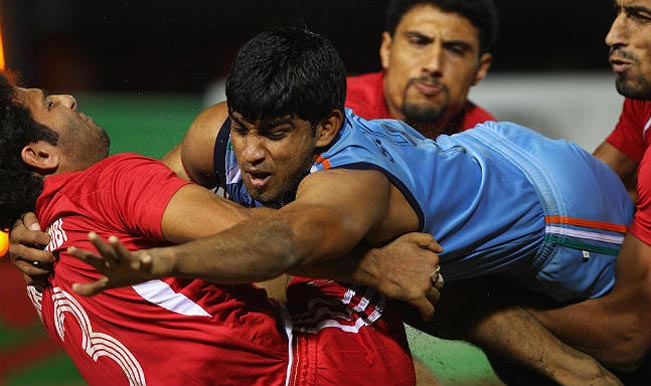 Incheon, Sep 30: The Indian men and women’s kabaddi teams made it to the semifinals of the 17th Asian Games after topping their respective groups here Tuesday. The men’s team, record six time champions, brushed aside arch-rivals Pakistan 23-11 to top Group A to make the last-four at the Songdo Global University Gymnasium. The women’s, who are the defending champions, thrashed South Korea 45-26 to top Group A also enter the semi-finals . Also Read - Haryana Government Appoints Wrestler Babita Phogat, Kabaddi Player Kavita Devi as Sports Deputy Directors

The Rakesh Kumar-led men’s team, which defeated Bangladesh and Thailand earlier, put in another dominating performance to trounce Pakistan. Indian men have won all the six gold medals ever since the spot was introduced in the Asian Games in 1990 in Beijing. The men’s team with the starting line-up of Jasvir Singh, Anup Kumar, Manjeet Chhillar, Navneet Singh, Gurpreet Singh and Subramaniam Rajguru, rode on its brilliant first half when it zoomed to a 17-4 lead. The Indian team knocked out 11 Pakistan athletes and collected two ‘lona’ points. Also Read - Have Drawn Inspiration From my Struggles: Deepak Hooda on PKL's Beyond The Mat

After taking a big lead in the first 20 minutes, defending champions, India played it easy in the second half and got six points as compared to Pakistan’s seven. But in the end, the 13 points first half deficit proved costly for the Pakistan, who also qualified for the semi-final as the second team from Group A. The semi-finals are slated for Thursday. Also Read - Kabaddi Stars Ajay Thakur, Fazel Atrachali and Other Players Urge Fans to Stay Home to Fight COVID-19 Pandemic

Earlier in the day, the women’s team, which thrashed Bangladesh Sunday, put in another dominating performance to trounce the hosts at the Songdo Global University Gymnasium. The women’s team with the starting line-up of Kavitha Selvaraj, Kavita Devi, V. Tejeswini Bai, Abhilasha Mhatre, Priyanka, Mamatha Poojari and Kishori Shinde, rode on its brilliant first half when it zoomed to 27-10 lead. The Indian team knocked out 22 Korean athletes and collected four ‘lona’ points.

Defending champions, India rested some seniors in the second half that allowed the Koreans to score some points. The Koreans bagged 16 points as compared to India’s 18 in the second half. But the hosts failed to erase the 17 points deficit of the first half and were knocked out of the competition.  In the second half, the Indian girls got 15 points for ousting Korean players and scored four lona points. The semi-finals will take place Thursday.