Khushbir Kaur clocked 1:33:07 to win the silver medal at Asian Games 2014 in Incheon 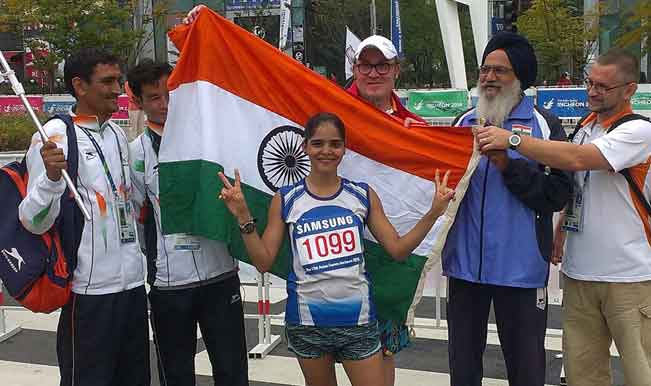 Incheon, Sep 28: Khushbir Kaur today became the first Indian woman to clinch a 20km Race Walk silver medal in the Asian Games by bettering her personal best and setting a new national record in the process. The 21-year-old from Amritsar clocked 1:33:07 to improve on her previous personal best of 1:33:37, which was also the national record, to finish second at the Marathon Course here. Also Read - Schools Reopening From Monday | What Back to Classes Might Look Like Amid Pandemic

Khushbir was a little over two minutes behind behind gold-medallist Lu Xiuzhi of China, who clocked 1:31:06. The Indian was consistently third till the 18km mark before going up a position in the final two kilometres, thanks largely to the slowing down of second-placed Chinese Nie Jingjing, who eventually finished fourth. The bronze medal went to local favourite Jeon Yeongeun, who also clocked a personal best of 1:33:18. Also Read - COVID-19: With Spike of Over 96,000 Cases, India's Tally Crosses 52-Lakh Mark, Deaths Near 85K

This is the biggest triumph of Khushbir’s nascent career after the bronze medal she won at this year’s Asian Walking Championships bronze in Japan. She was the first Indian woman to achieve such a feat. Khushbir burst into the scene after winning a bronze medal in the 10,000-metre walk race at the 2012 Asian Junior Athletics Championships in Colombo. Also Read - Trump Identifies India, 20 Other Nations As Major Drug Transit Or Major Illicit Drug-Producing Countries