India's final medal tally will depend a lot on grapplers and pugilists performances in the 17th edition of Asian Games. 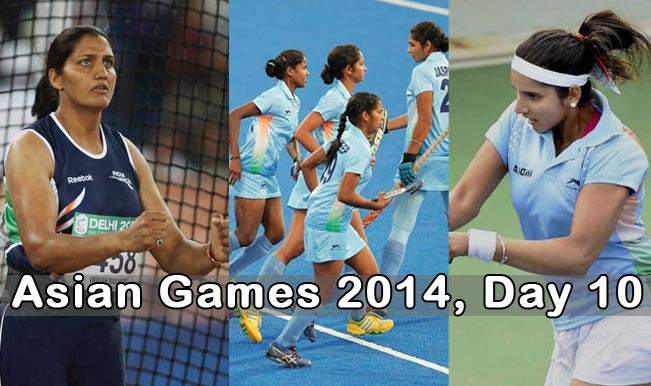 Discus thrower Seema Punia and the mixed doubles tennis pair of Sania Mirza and Saketh Myneni brought home the gold medals for India as seven medals came in on what was an impressive Monday for India at the 17th Asian Games. With a total of 42 medals, including six gold medals, India are now ninth in the medals tally, which is dominated by China, who are in lead with a total of 238 medals, including 112 golds. Hosts South Korea (146) and Japan (132) are second and third respectively. Also Read - French Open 2020: Novak Djokovic Showers Big Praise on Rafael Nadal After Historic Roland Garros Triumph, Says Today You Showed Why You Are King of Clay

Sania Mirza and Saketh Sai Myneni of India take the opening set 6-4 against Hsien Yin Peng and Hao Ching Chan from Chinese Taipei in the mixed double final at the Yeorumul Tennis Courts – Center Court. One break point earned by the Indian duo, they sealed the set to go 1-0 up in the gold medal match.

India finish 2nd in Men’s 4 x 400m Relay Round 1 – Heat 2. They qualify for the finals. Another good news coming from the track and field at the Incheon Asiad Main Stadium here on Monday.

Men’s Freestyle 61 kg Gold Medal Match: Wrestler Bajrang goes down to the Iranian Masoud Esmaeilpoorjouybari in  well-fought match to settle for silver medal. Wrestler Bajrang trails 0-2 down at the end of Masoud Esmaeilpoorjouybari of Iran in the final match. He made a comeback with good work from Bajrang to make it 2-2. He went down with another 2 points down after being pushed out of the mat to go 2-4 down. He is back with leg hook to level with 4-4 before Iranian takes it 6-4. Read: Wrestler Bajrang settles for silver in Men’s Freestyle 61 kg category at Asian Games 2014

Indian Men’s kabaddi team keep India’s gold medal hopes alive as the team thrashed Thailand 66-27 in a preliminary Group A match of the 17th Asian Games at the Songdo Global University Gymnasium here Monday. Defending champions, India dominated the match from the start and raced to a 29-15 lead till the first half by ousting 22 Thai players.

The Day 10 will see action from the boxing ring as well as from wrestling circuit. Both these events has produced great results so far in Asian Games and should motivate others to continue with the positive momentum. India’s final medal tally will depend a lot on grapplers and pugilists performances in the 17th edition of Asian Games.