It will be exciting to watch the Indian side overcome South Korea in the Men's Hockey Semifinal at the Soenhak Hockey Stadium here on Tuesday. 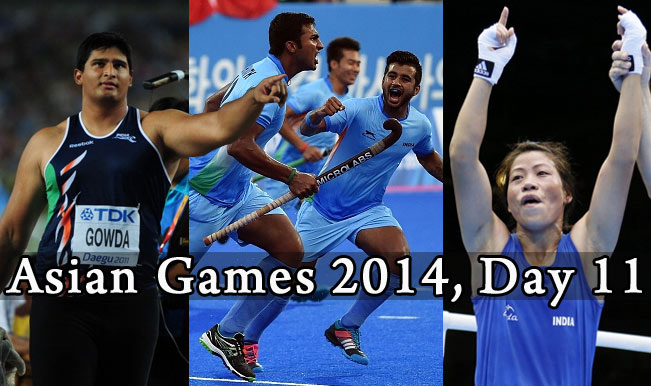 Day 11 of Asian Games 2014 will see boxers Mary Kom, L Sarita Devi, Pooja Rani going for the kill to better the colour of the medals while CWG 2014 gold medalist Vikas Gowda will be in action along with the Indian men’s hockey team try to clear the South Korean test on September 30, Tuesday at 6.30 am IST. India is currently ranked 9th with 42 medals (6 gold, 7 silver and 29 bronze). See Asian Games 2014 Medal Table: Complete Medal Tally of 17th Incheon Asian Games Also Read - Jawaharlal Nehru Stadium in New Delhi to be Redeveloped at a Cost of 7,850 Crore

Thanks to Vikas Gowda’s silver medal in discus throw, India maintain top-1o rankings in the Asian Games 2014 medal standings while final berths assured by boxer MC Mary Kom and the Indian men’s hockey team competed the Day 11 for India. Indian hockey team made to finals of Asian Games after a gap of 12 as they defeated formidable side in South Korea. India also added 2 bronze in boxing and 1 in yachting take their medal tally to 46 with 6 gold, 8 silver and 32 bronze. Also Read - I Regret Becoming a Cyclist, All I Now Want is my Old Life Back: Swaran Singh

Indian men’s hockey team found their lost midas touch back again to advance to the finals in Asian Games 2014. They have assured a silver for India but would not like to settle down for anything less than gold. The other highlight was boxing champion MC Mary Kom securing a berth in the gold medal bout of the women’s flyweight (48-51kg) after a convincing win in the semi-final of the 17th Asian Games here Tuesday.

Men’s Hockey Semi-final, India vs South Korea: India beats South Korea with the sole goal of Akashdeep in the third qaureter to enter the men’s hockey final for the gold medal game at the Seonhak Hockey Stadium – Pitch 1. South Korea has been given free hit but India escapes. South Korea is looking for that equalizing goal but the great defense provided by Ramandeep Singh and army is just not allowing the Korean to breakthrough. Less than five minutes to go for India to emerge victorious.

The sole goal by India’s Akashdeep Singh in the dying minutes of 3rd quarter helps Idnia maintain the lead over South Korea as less than 9 minutes to go for the match.

India lead 1-0 against South Korea at the end of 3rd quarter in Men’s Hockey Semis. The first goal of the first semifinal match has been finally scored and it is India’s Akashdeep Singh who scored giving the lead to India in the 3rd quarter.

Men’s Hockey Semi-final, India vs South Korea:  At the end of half-time, India and South Korea remain locked at 0-0 with none of the side still making the breakthrough. In the two quarters, India has been the more aggressive of the two teams with 3 shots on the goal compared to Korea’s none.

The defending champions India beat their neighbours Pakistan in a comfortable one-sided group match by 23-11. The Pakistani side tried making some some sort of come back in the second half but solid Indian side gave no easy points as they emerge winner of Preliminary group A. India take on Pakistan in their Group A Kabaddi  match. Indian players scored regularly against the arch rivals and were ahead 17-4 after the first half. Pakistan players on the other hand looked completely lost.

Women’s Middle (69-75kg) Semifinal: Pooja Rani is second boxer in line after Laishram Sarita Devi to settle for bronze medal on Day 11 of Asian Games 2014. Pooja Rani looked dissapointed as she went down to Chinese Li Qian after the judges unanimously favoured the Chinese over India boxer.

The last three days saw India win 25 medals and also qualify for medal round events to keep the numbers adding to their medal tally. After a well balanced show by the grapplers, it will be pugilists turn to bring in glories for the country. From the boxing ring, it will be famed Mary Kom along with other boxers like L Sarita Devi and Pooja Rani, trying to box their way into the respective categories finals. They have already assured atleast a bronze for themselves.

In other sporting event, the spotlight will be on the men’s hockey team that will take on hosts South Korea for a place in final. Considered to be one of the toughest opponents for the Indian side, it will be exciting to watch the Indian side overcome them at the Soenhak Hockey Stadium here on Tuesday.

India has also witnessed good performances by its athletes in the track and field events and would once again be looking to its best medal hope discus thrower and Commonwealth Games 2014 gold medalist Vikas Gowda to emerge victorious at the Incheon Asiad Main Stadium.