Apart from the individual hopes, India will also see teams in action from the field of hockey, football and tennis. 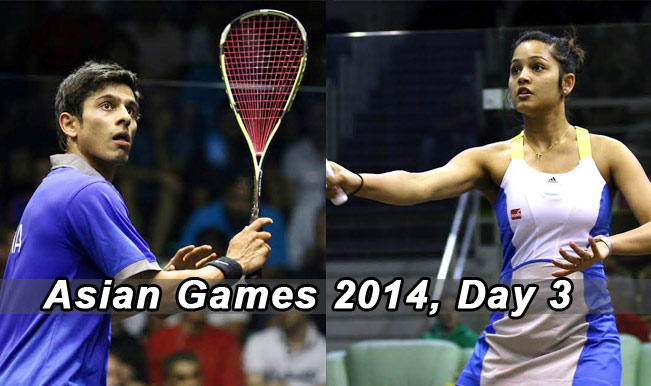 Top seed Saurav Ghosal stormed into the final of the men’s singles event at the 17th Asian Games here Monday and ensured India a sure silver or a possible gold medal in the squash competition. Meanwhile, Dipika Pallikal settled for the bronze medal in women’s singles after going down to the top seed and World No.1 Nicol David of Malaysia 4-11, 4-11, 5-11. The shooting range continued to be a happy hunting ground for the Indian contingent with the women’s pistol trio of Rahi Sarnobat, Anisa Sayyed and Heena Sidhu claiming a bronze in the 25m team event at the Ongnyeon International Range. Wushu athletes Narender Grewal and Yumnam Sanathoi Devi assured India of two more Asian Games medals after winning their respective men’s and women’s quarterfinal matches at the Ganghwa Dolmens Gymnasium here Monday. (Wires) Also Read - 16 Countries Provide Visa-Free Entry to Indian Passport Holders: Govt Tells Rajya Sabha

Wushu athletes Narender Grewal and Yumnam Sanathoi Devi assured India of two more Asian Games medals after winning their respective men’s and women’s quarterfinal matches at the Ganghwa Dolmens Gymnasium here Monday. In the men’s Sanda-60kg quarterfinals, world No.9 Grewal defeated Abdullah of Pakistan 2-0 to enter the medal round matches. He will face Philippines’ world No.3 Jean Claude Saclag in the semifinal match Tuesday. In the women’s quarter-final, Yumnam Sanathoi Devi downed Mongolia’s Amgalanjargal Sangidorj 2-0 to confirm ensure at least a bronze medal in the Sanda-52kg category. World No.5 Devi will take on China’s Luan Zhang in the semi-final match Tuesday. IANS

India’s only individual Olympic gold medallist Abhinav Bindra Monday announced his retirement from competitive shooting, saying the 2014 Asian Games would be his last, but added that he would still give his last shot at the 2016 Olympic Games. Bindra, 31, will represent India in his pet event, the 10-mtre air rifle event, here Tuesday. 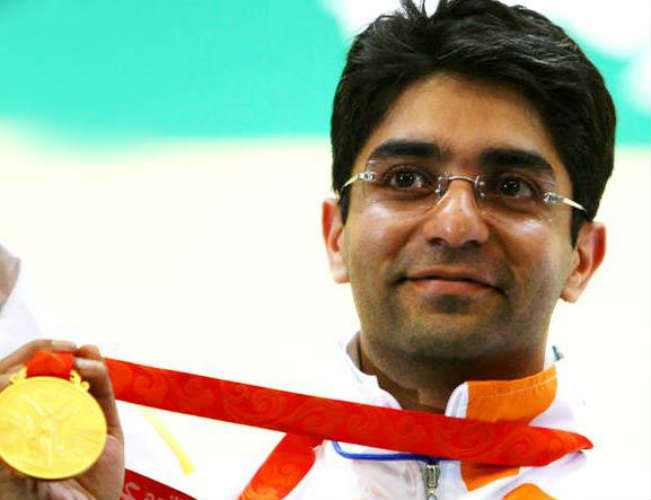 “Tomorrow will mark the end of my professional shooting life! I will, however, still shoot, compete as a hobby shooter, training twice a week,” Bindra, who won the gold in the Beijing Olympics, said on Twitter.

Dipika Pallikal, who lost to World No.1 Nicol David in the semifinals today, said she was pleased with her marathon winning effort against teammate Joshana Chinappa that assured her of a bronze yesterday, especially because it proved the “authorities and her doubters” wrong. 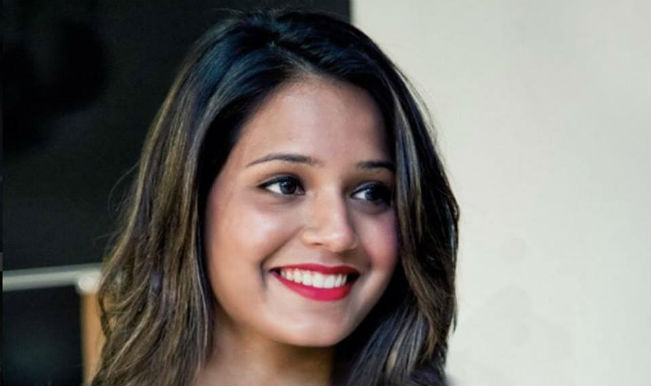 A vindicated Dipika Pallikal has said she will continue to fight against the “manipulated” draw with higher authorities after being let down by the officials back home. Press Trust of India

Indian shooters kept up their fine performance in the 17th Asian Games with the women’s team winning the bronze medal in the 25 metre pistol event at the Ongnyeon International Shooting Range here Monday. The Indian team comprising Rahi Sarnobat (580), Anisa Sayyed (577) and Heena Sidhu (572) shot a total of 1,729 to claim the bronze medal. Rahi was the only Indian to qualify for the semi-final of the individual event. IANS 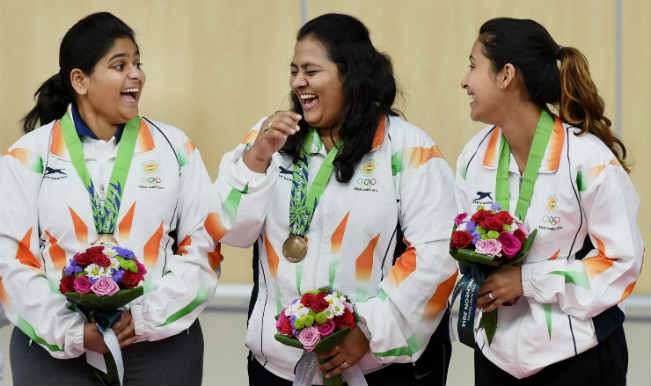 Jordan won the first round match against India 2-0. The Men’s First Round Group G match saw Jordan leading over India throughout the match with ALBASHTAWI Laith Subhi Drzi scoring the first goal in 16th minutes in the first half while THALJI Yazan Mohammad Yousef sealed the match fate with his 66th minute goal at Munhak Stadium.

India beat Kazakhstan 80-61 in Men’s Qualifying Round Group B match. Some sort of revenge from Kazakhstan after their side ousted both men’s and women’s teams in tennis quarterfinals today.

Thanks to the 17th minute goal conceded by India, Jordan is leading against India at half-time in Men’s First Round Group G football match by 1-0. Captain Sunil Chhetri will have to quickly plan a comeback in the second half.

The Indian men’s and women’s tennis teams were knocked out from their respective quarterfinal matches of the 17th Asian Games at the Yeorumul Tennis Courts here Monday. Kazakhstan proved to be the stumbling block, knocking out both the Indian men (1-2) and women (1-2) with relative ease and similar margins.

Captain Sunil Chhetri is shown yellow card as India is trailing 0-1 against Jordan, after Jordan took an early lead in the 17th minute against India in Men’s First Round Group G match.

Saurav Ghosal does one better than his fellow squash player Dipika Pallikal to get past his semi-finals opponent and assure India a silver medal. Saurav Ghosal will meet the winner of Almezayen Abdullah (Kuwait) and Ho Yin Lee (Hong Kong) for the singles title on September 22 at 09:30 am IST.

India’s squash star Dipika Pallikal lost her semi-final women’s singles match to World No.1 Nicol David of Malaysia and settled for the bronze medal in the 17th Asian Games at the Yeorumul Squash Courts here Monday. Dipika, World No.12, went down 11-4, 11-4 and 11-5 to the Malaysian in the match that lasted 25 minutes.

Indian shooters kept up their fine performance in the 17th Asian Games with the women’s team winning the bronze medal in the 25 metre pistol event at the Ongnyeon International Shooting Range here Monday. The Indian team comprising Rahi Sarnobat (580), Anisa Sayyed (577) and Heena Sidhu (572) shot a total of 1,729 to claim the bronze medal.

Women’s Singles Semifinals: Dipika Pallikal failed to advance to her maiden Asian Games finals after she lost in straight games to Nicol David. She lost 4-11, 4-11, 5-11 in the semi-finals and will have to be content with bronze medal for herself and India. She assured one on Sunday after she defeated fellow doubles partner Joshna Chinappa in quarters. Read: Dipika Pallikal gets 5th bronze medal for India in Asian Games 2014

China were confirmed winners of the team gold after judges overturned an earlier decision to disqualify them from the 17th Asian Games. The Chinese trio of Yi Siling, Zhang Binbin and Wu Liuxi combined for 1,253.8 points to win the team gold at Ongnyeon International Shooting Range, breaking the world record set by their own team mates last year by 0.1 point. Iran won the silver and Singapore bronze. But shortly after, the Chinese team was disqualified after judges ruled Zhang’s rifle had violated regulations concerning maximum weight limits. The decision, however, was later overturned following an appeal by the Chinese and Zhang was allowed to compete for the individual title and she ended up winning the bronze medal with a score of 186.3 points. (Wire Piece)

Women’s Singles Semifinals: Trouble continues for Dipikal as she lost her second game to Nicol David 11-4 in just 6 minutes. She is now trailing 0-2 in the singles semi-finals here at Yeorumul Squash Courts – Center Court. Dipika Pallikal lost the first game 4-11 to Nicol David of Malaysia in singles semis. Nicol David is one of the the most renowned woman player in squash history. She has won the Asian Games gold medal on five occasions. 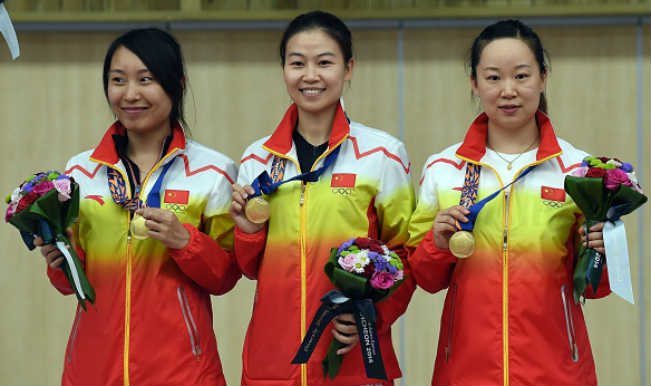 The Chinese trio of Yi Siling, Zhang Binbin and Wu Liuxi combined for 1253.8 points to win the team gold at Ongnyeon International Shooting Range, breaking the previous world record set by their own teammates last year by 0.1 point, according to the games’ site. Zhang later got disqualified for using unauthorised equipment for the event, costing her country the gold and the world record, which would have been the first from shooting at this Asiad in South Korea’s Incheon city. Iran moved up from silver to gold with 1245.9 points, and South Korea grabbed silver with 1241.6. Singapore won bronze after getting 1241.1.

Women’s Team Quarterfinals: India’s Prarthana Gulabrao lost the rubber 1 in straight sets 3-6, 2-6 by Yuliya Putintseva of Kazakhstan. Unseeded Indian side is facing second seed Kazakhstan. India trails 0-1 to Kazakhstan and will have to win the next rubber 2 in order to avoid an ouster.

Historic day for Iran as their shooters Najmeh Khedmati won the gold with a score of 207.9 and Andevari Narjes Emamgholinejad hits a total score of 206.6 to bag silver medal. China were in for a shocker as they were reduced to third place finish in the 10m Air Rifle Women’s event with Najmeh Khedmati and Andevari Narjes Emamgholinejad, both shooters from Iran took the gold and silver medals respectively. China’s Binbin Zhang came third in the event. While for India, the search for first medal on day 3 continues as 21-year-old Ayonika Paul finished with a lowly 7th rank.

It will be India’s star squash players Dipika Pallikal and Saurav Ghosal leading India’s campaign on Day 3 of Asian Games 2014. Dipika Pallikal will play Nicol David Ann for a place in finals while top seed Saurav Ghosal will play against Ong Beng Hee of Malaysia, also aiming to be a finalist here in Incheon. The day will also feature Rajwinder Kaur taking on Javzmaa Odkhuu of Mongolia in the women’s +78 kg quarterfinal. One has high hopes from Rajinder as she is coming off a medal win from Commonwealth Games 2014.

Apart from the individual hopes, India will also see teams in action from the field of hockey, football and tennis. In tennis, both men and women’s side will play against Kazakhstan for a place in semis while Indian eves will begin their campaign against Thailand in the hockey field in Pool A match. The Indian men’s football team will face Jordan test in their first round. There would be women’s action from shooting circuit featuring both individual and team events in 10m air rifle and 25m pistol. Read the Complete Schedule of Indian Players in Action on Day 3 of Asian Games 2014

The two days of Asian Games 2014 so far, since the commencement of sporting action on September 20, India has maintained a relatively low profile with a total of 4 medals won so far including 1 gold and 3 bronze. On Day 1, it was Jitu Rai who won the sole gold medal so far in Incheon Games and shooter Shweta Chaudhary winning bronze while Day 2 saw another medal from shooting event when the men’s team bagged bronze medal in 10m air pistol team. The second day also saw Saina Nehwal and co. win bronze medal in badminton, a feat achieve after a gap of 28 years.