Asian Games 2014 Live Updates: A look at Indian medallists in Incheon at the end of Day 4

India with total number of 6 medals stands at 13th position in the Asian Games 2014 Medal Table after the end of first three days. 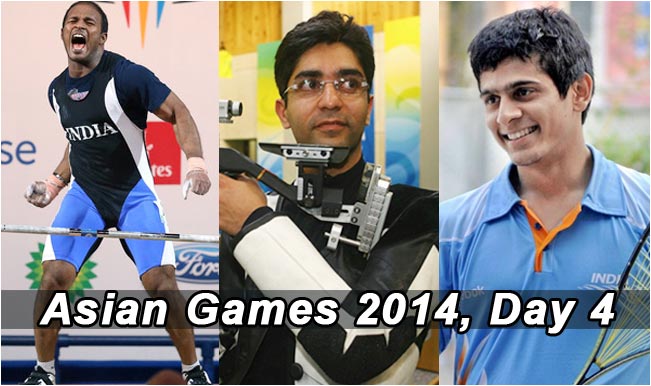 The exciting sporting action will continue on Day 4 of Asian Games 2014 in Incheon, South Korea and one can follow all the live updates on September 23 from 05:30 am IST onwards. India is looking forward to top-notch star performers shooter Abhinav Bindra, squash player Saurav Ghosal and weightlifter Sathish Shivalingam to lead India’s medal hopes in the 17th edition of Asian Games. See Asian Games 2014 Medal Table: Complete Medal Tally of 17th Incheon Asian Games Also Read - Jawaharlal Nehru Stadium in New Delhi to be Redeveloped at a Cost of 7,850 Crore

At the end of Day 4 of Asian Games, India’s medal tally touches 11 including 1 gold, 1 silver and 9 bronze to be placed at 13th rank in the medal table. Take a look at the following Indian medallists at the end of Day 4 of competitions at the 17th Asian Games here Tuesday: Also Read - I Regret Becoming a Cyclist, All I Now Want is my Old Life Back: Swaran Singh

India’s Sanathoi Devi settled for the bronze medal after she lost her semi-final bout to Chinese Luan Zhang in wushu women’s sanda (52kg) in the 17th Asian Games here Tuesday. The Indian lost 0-2 to the Chinese at the Ganghwa Dolmens Gymnasium.

India’s wushu athlete Yumlembam Sapana Devi finished seventh in the final of the women’s changquan event of the 17th Asian Games at the Ganghwa Dolmens Gymnasium here Tuesday. Sapana scored 9.27 points out of 10 as she collected 4.7 for quality of management, 2.57 for overall performance and 2 for degree of difficulty.

Women’s 63 kg: Taiwan’s Lin Tzu-chi broke two world records with her final lift to snatch gold away from China’s Deng Wei in the most dramatic of fashions in the women’s 63kg at the Asian Games.Lin took the lead with a clean and jerk lift of 143kg which took her to a total of 259kg and smashed the old combined world record of 257kg.

Men’s Pool B Match 6: Akshdeep Singh and Raghunath scores in the third quarter in the 33rd minute and 39th minute to give India unassailable 4-0 lead over Oman. India next plays against Pakistan on September 25. 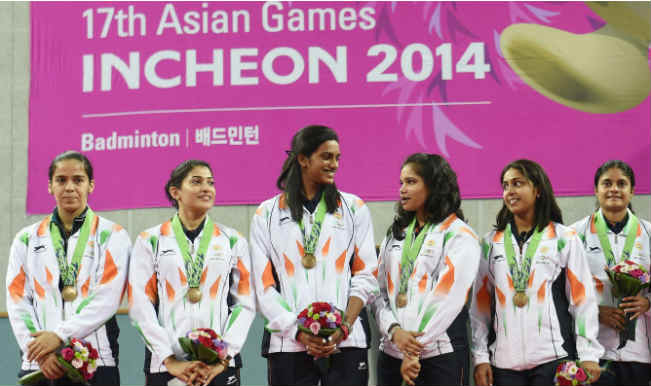 Men’s Pool B Match 6: Rupinderpal Singh’s double strike helps India lead 2-0 against Oman at half-time. India could not capitalize on chances as they had 10 shots to Oman’s 1. But they lead in half-time much to audiences relief. Rupinderpal Singh scored twice to give 0-2 lead against Oman in the beginning of 2 quarter. Indian men’s hockey team failed to score single goal against Oman at the end of first quarter at Seonhak Hockey Stadium – Pitch 1.

Abhinav Bindra said he feels excited to win medals in Incheon alongside world-class shooters after the star Indian shooter won double bronze – in the men’s 10m air rifle in individual and team event on what is to be be his last major international competition as he has decided to become a hobby shooter from now on. 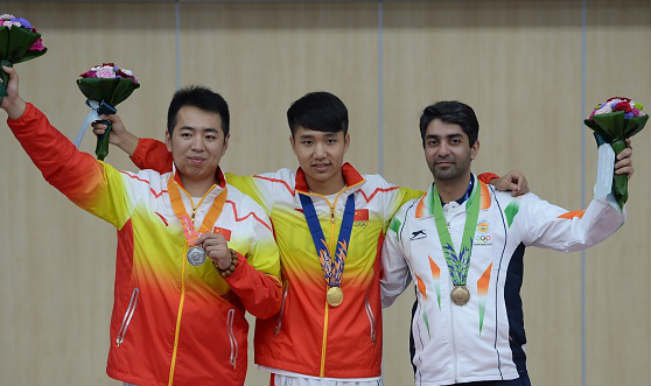 The Glasgow Commonwealth Games gold medallist had a fine sequence of scores barring 9.9 and 9.6 on his 6th and 12th shots, and had to be content with the bronze medal after shooting 10.6 and 10.7 in his last two shots. The gold medal was won by 18-year-old Chinese sensation Yang Haoran who came into the tournament as the clear favourite after winning the world title at Granada, Spain just prior to the Games.

Saurav Ghosal is not able to clear the two points deficit as he is down 7-9 in the fourth game of final match. Saurabh Ghosal will have to let go of the third game setback as wins the opening point of the fourth game. But he is put under constant pressure from Abdullah Al Muzayen as Ghosal trails 5-7.

Men’s Singles Gold Medal Match: It is easy pickings for the top seed Saurav Ghosal as he take the second game 11-2 in just 6 minutes to extend his lead to 2-0 over his opponent form Kuwait. Saurav Ghosal leads 2-0.

10m Air Rifle Men’s Finals: Abhinav Bindra after six shots has dropped down to the fourth place with 61.8 points. He hits a 10.5, 10.4 and 9.9. At the end of three shots, Abhinav Bindra is at the second place with 31.1 after the three rounds of shots with Yang Haron of China leading with 31.8 at Ongnyeon International Shooting Range.

The Day 4 of Asian Games 2014 will begin with focus revolving around one name – Abhinav Bindra. Yes, the 31-year-old created a stir in Incheon with his announcement of retirement post Asiad 2014. Ironically, Abhinav Bindra who remains to be India’s lone gold medalist in Olympics has won just one medal in Asian Games, a silver medal in 10m Air Rifle Team event in Guangzhou    . Bindra will be looking forward to winning this eluding achievement from his kitty at Incheon and also compete the great feat of successive medals in Commonwealth Games and Asian Games.

The fourth day of 17th edition of Asian Games 2014 will also see squash player Saurav Ghosal playing gold medal match against Abdullah Kh Kh H M Almezayen of Kuwait in his maiden Asian Games singles finals. The 28-year-old Indian already has three Asian Games bronze medals to his name — winning the bronze in singles in 2006, 2010 and a doubles bronze in 2010. The squash team will also face Jordan test in team event. Read the Complete Schedule of Indian Players in Action on Day 4 of Asian Games 2014

There are several individual performers who will try and win the top honours for India like wushu athletes, World No.9 Narender Grewal and World No. 5 Yumnam Sanathoi Devi already assuring India two medals in men’s and women’s category but they would hope to get only the best. From gymnastics artistic event, Dipa Karmarkar and Ashish Kumar will be in action in the Individual All-Around Finals.

India with total number of 6 medals stands at 13th position in the Asian Games 2014 Medal Table after the end of first three days. Indian athletes would like to eclipse this lack-lustrous display and bring glory for the country.