The first day of boxing saw successful outing by Akhil Kumar and Shiva Thapa, a motivating result for boxers Devendro Singh and Manoj Kumar who will enter ring on Thursday. 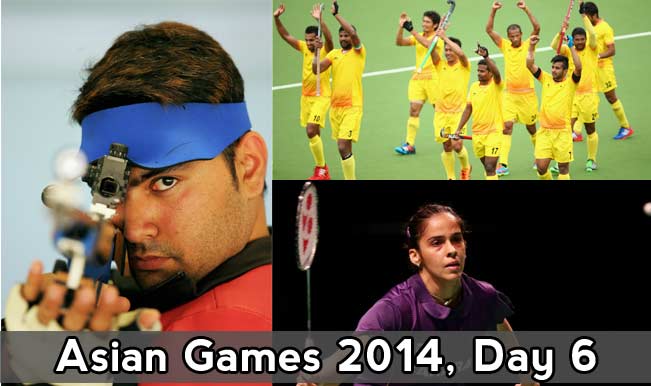 Indian rowers were the star performers, bagging two bronze medals, while the unheralded women shooters added another bronze as India maintained their 15th position in the overall standings with a tally of 15 in the 17th Asian Games on Thursday. While, Archers kept alive India’s medal hopes in the 17th Asian Games as the men’s team qualified for the compound final, assuring at least the silver medal, while the women’s team will be fighting it out for the bronze at the Gyeyang Asiad Archery Field here. Also India’s men and women squash team assure two more bronze medals addition in medal tally. Also Read - Trump Identifies India, 20 Other Nations As Major Drug Transit Or Major Illicit Drug-Producing Countries

Men’s Hockey Pool B Match: Pakistan’s Mohammad Waqas and Mohammad Umar Bhutta two goals were good enough to down India 2-1 in Men’s Hockey Pool B Match. Both the team who did not concede a single goal before facing each other played some aggressive game but not with many goals though. Nikkin Thimmaiah helped India equalize in the 53rd minute but another goal conceded few minutes later to give lead back to Pakistan.

The men’s squash team assured India of at least another bronze medal as they qualified for the semi-finals of the event at the Asian Games here Thursday. The team made sure they will finish Group B in the top-2 position, thereby entering the semis which will definitely entitle them to a bronze. India defeated Japan 3-0 in their group match at the Yeorumul Squash Courts.

India beat China 3-0 in their final group match at the Yeorumul Squash Courts. Joshna Chinappa, Anaka Alankamony and Dipika Pallikal all won their respective singles matches to help the team register their third win in a row and top the standings.

An upbeat Indian men’s hockey team, buoyed by successive high-scoring wins against Sri Lanka and Oman, will aim to maintain its unbeaten status against arch rivals Pakistan in an eagerly awaited Asian Games contest at the Soenhak Hockey Stadium here Thursday. Both teams are on six points having won their respective first two matches of their pool. India thrashed Sri Lanka 8-0 and pummelled Oman 7-0. Pakistan trounced Sri lanka 14-0 and downed China 2-0. Indian captain Sardar Singh spoke of the team’s determination to win ahead of the high-voltage clash against Pakistan.

India go into the match enjoying the comfort of beating Pakistan 3-2 in the 2010 Asian Games. India play their last group stage match against China Saturday.

Women’s Singles Round of 16: Another medal hope in Badminton, shuttler PV Sindhu’s Round of 16 match gets underway.

Women’s Singles Round of 16: Sixth seed, India’s Saina Nehwal defeated Soraya Aghaeihajiagha of Iran in straight games 21-7, 21-6 in just 18 minutes to advance to the singles quarter-finals.

At the end of first five days of sporting action in Incheon, India has not managed to live up to expectations so far in Asian Games 2014. India bagged just a bronze medal on Day 5 with Dushiant Dushyant finishing third in men’s lightweight single sculls final. Despite an unimpressive day in terms of addition of medal counts, India did well in early qualifications with Saina Nehwal and PV Sindhu will play their pre-quarters match. India also did good to clear early rounds in men’s and women’s doubles in both badminton and squash. Read the Complete Schedule of Indian Players in Action on Day 6 of Asian Games 2014

The first day of boxing saw successful outing by Akhil Kumar and Shiva Thapa, a motivating result for boxers Devendro Singh and Manoj Kumar who will enter ring on Thursday. One of the major highlights of the day is the clash of arch-rivals, India vs Pakistan Hockey match in Pool B.

Shooters, who had grabbed the majority of India’s medals in Asian Games 2014 so far, had a difficult day as they failed to bag single medal at the Ongnyeon International Shooting Range. One would hope this horrible run not to be repeated with Gagan Narang leading the shooters for another round of medals from the shooting range.