From the hockey field, Indian men would quickly like to forget their 1-2 loss against Pakistan and be ready to register a win against China for a berth in semifinals. 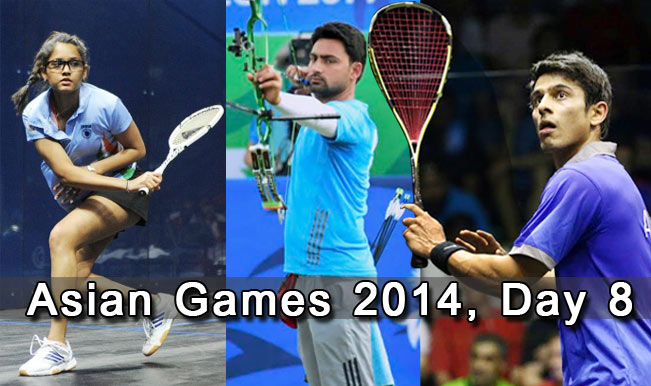 India finally managed to get the breakthrough out of average performances on Day 8 of Asian Games 2014 witnessing thebest day at 17th Asiad so far on September 27. The day began with women’s bagging the first medal, a bronze medal in archery in compound team event. It was followed by the golden moment awaited for six days since Jitu Rai shot the gold medal as men’s team won the 2nd gold medal of the tournament in the same event. Archer Abhishek Verma and Trisha Deb also won medals in individual events. The men’s squash team bagged the third gold medal while the ladies brought silver home. Wrestlers Geetika Jakhar and Vinesh Phogat won bronze medals while Chain Singh made sure of a ritual medal in shooting. Athletes Lalita Babar and Sudha Singh opened the account in track and field event with silver and bronze medals. Apart from winning medals, India has lined up many more to come by qualifying in the medal rounds. Overall, a brilliant day for India in Asian Games 2014. Also Read - Hockey: Rani Rampal on Becoming First Woman Player to Get Khel Ratna, Dedicates Her Award to The Corona Warriors

Men’s Pool B: India beat China 2-0 with Birender Lakra and Raghunath scoring for India in a very tightly contested match that saw Chinese player not allowing any freebies to a much formidable opponent India.

India’s Abhishek Verma had to be content with the silver medal after losing the men’s compound archery individual final of the 17th Asian Games at the at the Gyeyang Asiad Archery Field here Saturday. Verma, who earlier in the day won gold in the team compound event, lost 141-145 to Iran’s Esmaeil Ebadi to finish second. Read: Archer Abhishek Verma wins 4th Silver for India in Asian Games 2014

Compound Men’s Individual Gold Medal Match: Abhishek Verma settles for silver as he goes down to Esmaeil Ebadi of Iran by 145-141 at the Gyeyang Asiad Archery Field here Saturday. This is 4th medal won in archery in Asian Games 2014. Earlier he won gold medal in the compound men’s team event

Men’s Singles Quarterfinals: Sanam Singh fought well but could not get past the top seed Yen Hsun Lu in the quarterfinals. He lost to the Chinese Taipei player in straight sets 7-6, 6-4.

Compound Men’s Team event gold medal match: The Indian team created history as they went on to upstage world champions South Korea to win the gold medal in compound men’s team event. Indian team started the match with the lead by a point with 55-54 over hosts South Korea at the end of six shots.

Compound Women’s Team Bronze medal match: Indian trio of Trisha Deb, Purvasha Sudhir Shende, Jyothi Surekha Vennam pitted against the team of Iran won the bronze medal in the compound team event. They started with 28-24 lead over Iran after the end of series 1 to finally beat Iran 224-217 to take the 15th bronze.

India at the end of week one at the Asian Games stand at 16th place in the medal table with 17 medals including 1 gold, 2 silver and 17 bronze. Day 8 provides India golden chance to improve their rankings with three gold medal matches in line. In archery, the men will play South Korean in compound team final while women will play against Iran for bronze medal.

The biggest show will come from squash as Asiad 2014 silver medalist Saurav Ghosal will lead men’s side against Malaysia while bronze medalist in singles, Dipika Pallikal will lead women’s side also against Malaysia in team’s gold medal match. Indian players have won 2 medals and assured 2 more medals in squash. Read the Complete Schedule of Indian Players in Action on Day 8 of Asian Games 2014

After disappointing show by shuttlers on Day 7 with Saina Nehwal and Parupalli Kashyap crashing out of Asiad, India look forward to another racquet game in tennis as Yuki Bhambri, Sania Mirza, Sanam Singh, all will play their quarterfinals matches respectively.

From the hockey field, Indian men would quickly like to forget their 1-2 loss against Pakistan and be ready to register a win against China for a berth in semifinals.