India's biggest name in wrestling, Yogeshwar Dutt will also be in action on Sunday in hope of winning first gold medal in wrestling in Asian Games 2014 after Saturday saw mixed results in this event. 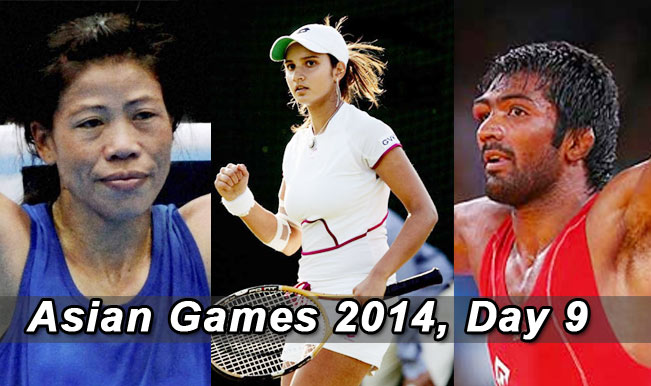 Mixed Doubles Semifinal: Sania Mirza and Saketh Sai Myneni reached the finals of Mixed Doubles final and have assured India of another silver medal. They registered an easy victory over the Chinese pair of Zeng Jie and Zhang Ze in straight sets 6-1, 6-3.

Men’s Doubles Semifinal Match 2: Yuki Bhambri/Divij Sharan settled for bronze medal after losing the semis to the Korean pair in nail biting contest 6-7 (8/10), 7-6 (8/6), 11-9. Dreams of having an all-Indian men’s doubles final was crushed after Indian pair of Yuki Bhambri and Divij Sharan squandered 4 match points to lose the match against South Korean  Lim Yongkyu and Chung Hyeon. The Indian pair failed to wrap match after having two match points in second set and repeated their mistakes in super tie-breaker to let match slip away.

Women’s 3000m Steeplechase Final: India’s hopes of getting a medal upgrade in the women’s 3000m steeplechase were dashed today after Bahrain’s Ruth Jebet was reinstated as the gold-winner following a review, a decision which the Indian contingent plans to challenge in front of “higher authorities”. The 17-year-old Kenya-born Jebet was reinstated a day after being led away in tears from the medal ceremony where it had been announced that she stood disqualified for stepping inside the track on her second last lap due to a stumble. Her disqualification, had it stayed, would have given the Indian medal tally a boost as bronze-winner Lalita Babar and fourth-placed Sudha Singh would have been upgraded.

Men’s Freestyle 65kg Semifinals: Dramatic turn of events in the semifinals as India’s Yogeshwar Dutt pins down Katai Yeerlanbieke of China to move into Men’s Freestyle 65kg Final. He assures gold or silver medal for India. Yogeshwar Dutt was down and out for majority of the match trailing 1-3 at the end of first round and 5-7 down with less than a minute before the 2012 London Olympics medalist turned the tables to win the thrilling encounter.

Women’s Freestyle 55kg Semifinals: India’s Babita Kumari lost to veteran Saori Yoshida of Japan in freestyle 55 kg category semis by 14-4. Babita had beaten Aiym Abdildina of Kazakhstan 13-10 to enter the semis. Babita will play for the bronze medal later in the day.

Men’s Doubles Semifinals: Indian duo Sanam Singh-Saketh Myneni defeated top seeds from Thailand, Sanchai Ratiwatana and Sonchat Ratiwatana in three sets to move into Men’s Doubles Final. They won by 4-6, 6-3, 1-0 (10) to move to the finals and assure a minimum of silver in doubles.

Men’s Singles Semifinal: Yuki Bhambri settled for bronze medal after he lost his semifinals match against Japan’s Yoshihito Nishioka in three sets 3-6, 6-2, 6-1. It is India’s first medal in tennis with four more assured by the tennis players in other events that will follow up later in the day. Read: Yuki Bhambri settles for Bronze medal in men’s singles after losing to Japan’s Yoshihito Nishioka

Women’s Team Preliminary Round Group A: Neha Aggarwal lost in straight games 11-7, 11-5, 11-5 against China’s Yuling Zhu in the Match 1. India trail 0-1 against China in this last group stage.

As Asian Games 2014 entered in its second week, India found a lease of new lifeline with its archers and squash players rising up to the occasion. India bagged 11 medals on Day 8 to lift the medal tally and India’s ranking to 11 from 16th of the previous day. Historic gold medals by archer and squash players set up the tone for India and has been well translated in other events as tennis stars like Sania Mirza, Yuki Bhambri assured atleast five more bronze medals in kitty for India. They would be playing their semi-finals matches at the Yeorumul Tennis Courts, in Incheon on Sunday.

In boxing, the Indian contingent have made a promising start to their Asian Games campaign with three women – Mary Kom, L. Sarita Devi, Pooja Rani – and two men – Gaurav Bidhuri and Mandeep Jangra – advancing to the quarter-finals of their respective categories. They would be playing for a berth in semi-finals at the Seonhak Gymnasium on Sunday. Read the Complete Schedule of Indian Players in Action on Day 9 of Asian Games 2014

Meanwhile, India’s biggest name in wrestling, Yogeshwar Dutt will also be in action on Sunday in hope of winning first gold medal in wrestling in Asian Games 2014 after Saturday saw mixed results in this event. The Indian grapplers wonn double bronze by Vinesh and Geetika Jakhar but Amit Kumar and Parveen Rana lost their respective pre-quarterfinal bouts. A lot was hoped from wrestling contingent after their brilliant performance in Commonwealth Games 2014 in Glasgow, Scotland.