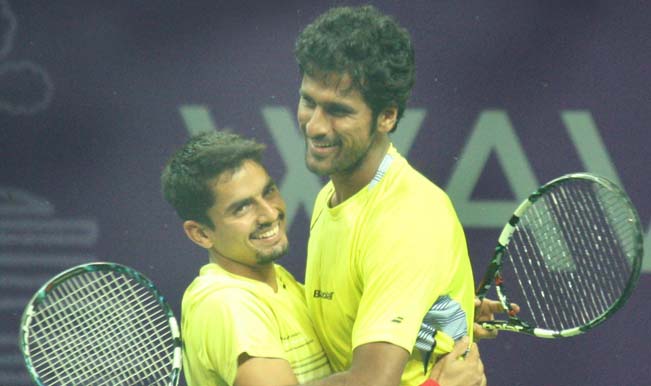 Incheon, Sep 28: A brilliant performance by Indian pair Sanam Singh and Saketh Myneni helped them overcome top seeded Thai team of Sanchai and Sonchat Ratiwatana to reach the men’s doubles final of the 17th Asian Games at the Yeorumul Tennis Courts here on Sunday. The fifth seeded team beat their Thai opponents 4-6, 6-3, 10-6 in an hour and three minutes via a super tie-breaker to assure India of at least the silver medal. Also Read - Chinese Aggression in Ladakh: Can They Sustain Against India?

The Indian pair were broken once and lost the first set 4-6 in 26 minutes. Sanam and Myneni fought back valiantly to take the second set 6-3 in 27 minutes. When it mattered most, the Indian team stood up to be counted and beat the higher ranked Thai pair 10-6 in the super tie-breaker to move into the final. Also Read - India's COVID-19 Tally Surpasses 60 Lakh-mark, Death Toll Reaches 95,542 | Key Points

India could very well have two teams in the final. Fourth seeds Divij Sharan and Yuki Bhambri, who settled for bronze in the singles event earlier in the day, take on Yongkyu Lim and Hyeon Chung of South Korea in the other semi-final later in the day. Also Read - COVID-19: India's Total Recoveries Cross 50 Lakh-mark, 1 Million People Cured in Last 11 Days, Claims Health Ministry