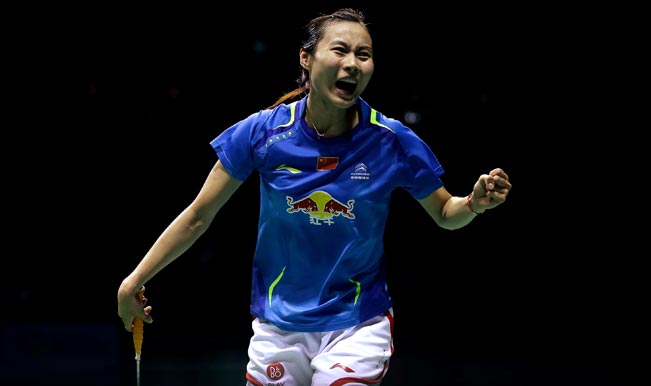 Incheon, Sept 28: China’s Wang Yihan fought back from a game down to condemn badminton world number one teammate Li Xuerui to another shock defeat in the women’s singles final at the Asian Games today. Li, who also lost in the world championships final this month to Spain’s Carolina Marin, consistently put shots long or in the net against a stronger Wang, the world number three. Also Read - 'Kashmiris Don't Feel They Are Indians & Would Rather Prefer to Be Ruled by China', Says Farooq Abdullah

“I made a lot of mistakes in the third game — Wang was playing well and I couldn’t beat her,” said Li. Also Read - 'China Back Off': Fresh Protests Break Outside Embassy in Nepal Over Alleged Chinese Intrusion

Wang said Incheon brought her good luck. Also Read - China Has no Intention to Fight Either 'Cold War' or 'Hot War' With Any Country: Xi Jinping

“I won the world junior championships in Incheon in 2006 and have played here many times, always with good results. Korea is a very lucky place for me.”

Wang had the edge on Li going into the match, having won seven out of 12 of their previous clashes. Li took the first set 21-11 but Wang came back with a barrage of smashes and a lucky net cord shot to take the second 21-17. A frustrated Li couldn’t find her form in the third, crumbling 21-7. Earlier, Indonesia’s Tontowi Ahmad and Liliyana Natsir prevented an all-Chinese final in the mixed doubles after thrashing the world number three pair in two games.

Second seeds Ma Jin and Xu Chen were no match for the third seeds and went down 21-12, 21-10 in their semi-final. They struggled to put points on the board in the face of fast and powerful attacking play, with Chinese coach Li Yongbo looking on impassively as they crashed to defeat. World number one mixed doubles duo Zhang Nan and Zhao Yunlei had an easier ride against unseeded Indonesians Praveen Jordan and Debby Susanto, winning 21-19 21-17 in their semi-final.

China last won the Asian Games mixed doubles title in 2006, but Indonesia have not been champions since 1982. Indonesian women’s pair Greysia Polii and Nitya Krishinda Maheswari scored a historic victory in their doubles final Saturday where they beat Japan in two games, the country’s first Asiad win in that event since 1978.

China are out of the men’s doubles event and lost in the men’s team competition, so can only win a maximum four gold medals compared to their five-gold haul in 2010.