This was his sixth medal on the trot in international competitions this year, including the gold medal in the Glasgow Commonwealth Games and silver in the Granada World Championship -- in the 50m range. 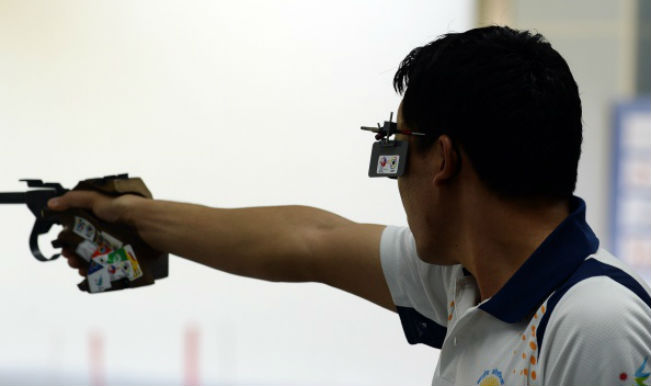 Incheon, Sep 20 :  India’s most in-form shooter Jitu Rai gave the country its first gold medal in the 17th Asian Games, cutting through a tough field to finish on top in the 50m pistol event here today. The world number five showed tremendous grit and concentration to beat back the challenge from strong contenders like Wang Zhiwei of China and South Korea’s two-time Olympic champion and reigning world champion Jongoh to win the gold. Also Read - Schools Reopening From Monday: What is Partial Resumption? Is There Any Compulsion to Attend Classes? FAQs Answered

In fact both Zhiwei and Jongoh were eliminated in the race early on leaving only the Indian ace and unheralded Vietnamese Hoang Phuong Nguyen fighting for the gold. It needed the last set of shots to decide the issue in favour of Rai. He shot 8.4 after the nervous Vietnamese was way off the mark to fire a poor 5.8 to win the gold. Fresh from his 50m Pistol silver in the World Championships, the Lucknow-based marksman completed a grand double as he had won a gold in the Commonwealth Games in Glasgow earlier this year. Also Read - Coronavirus Creates Havoc: 3 MPs, 6 MLAs And Former President Among COVID's VVIP Victims

He thus became only the second Indian pistol shooter to clinch an Asian Games title after Jaspal Rana and the fourth shooter overall after shotgun experts Randhir Singh in 1978 and Ronjan Sodhi in 2010. Rai said he badly wanted to win the gold here. “I wanted to win this gold badly and was under a lot of pressure. The competition here was even more than in the Commonwealth Games or the World Championship. I am happy that I could fulfill my wish,” he said.

He qualified seventh for the final with a tally of 559. National pistol coach Pavel Smirnov later praised Rai, describing him as a very strong character. “He’s very strong mentally. There had been lot of competitions this year leading into the Games, the CWG, the world championships. He’s mentally strong and that’s why he could do it,” he said.  The shooting and archery team’s mental trainer Vaibhav Agashe said the fact that 27-year-old Rai is from the army is of tremendous help and said he was among the fittest in the shooting fraternity. “He’s physically very fit. Muscle control is important,” said Agashe pointing out to the back-to-back competitions for Rai.

In the edge of the seat thriller that the final proved to be, Rai had to climb from the lower order to get into the medal round. When 14 shots were completed only four were left standing for the count: Rai, Nguyen, his compatriot Hoang Xuan Vien and China’s Wang Zhiwei. This was the time the Indian ace showed his true colours by shooting 9.9 and 10.7 to keep himself in medal contention. Hoang and Zhiwei got successively eliminated by the end of the 16th and 18th shots leaving Rai to fight for the gold with Nguyen.

Nguyen, in fact, led the Indian by 0.7 points after the 18th shot, but in the last series of two shots, lost his nerves and the chance for the title.
While the Vietnamese came up with scores of 8.7 and a shocking 5.8, a clear case of nerves, the steely-handed Indian brought off a stunning 9.6 and then sealed the gold with an 8.4. This was his sixth medal on the trot in international competitions this year, including the gold medal in the Glasgow Commonwealth Games and silver in the Granada World Championship — in the 50m range.