India begin their quest for the 17th Asian Games at Incheon with the aim of bettering their previous performances. This year a lot of Indian athletes will be in fray for medals in individual and team sports. 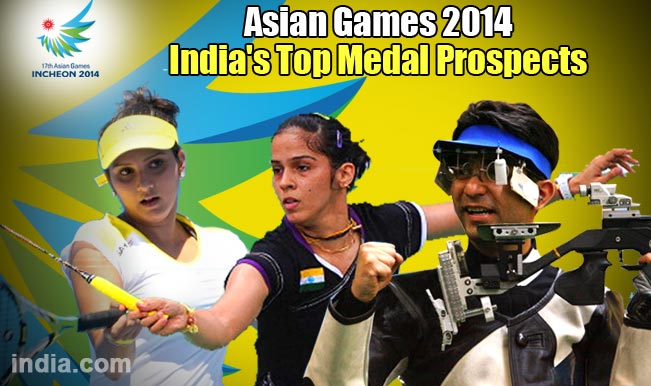 India begin their quest for the 17th Asian Games at Incheon with the aim of bettering their previous performances. This year a lot of Indian athletes will be in fray for medals in individual and team sports. Following India’s superb show at Glasgow in the recently-concluded Commonwealth Games, the pressure to put up a good performance will be high on the 679-member contingent. Also Read - Ladakh Standoff: India, China Hold Sixth Round of Corps Commander-Level Talks at Moldo

Sania Mirza  Also Read - Schools Reopening From Monday: What is Partial Resumption? Is There Any Compulsion to Attend Classes? FAQs Answered

India’s most famous and decorated female tennis player, Sania Mirza, who recently added another feather in her glorious career by winning US Open 2014 mixed doubles title, has pinned India in the tennis world since turning pro in 2003. Although her singles form dipped after 2006, with a series of injuries halting her career, her doubles career has been steadily increasing the number of trophies in her cabinet. She will be one of India’s biggest medal hopes at Incheon.

Dipika Pallikal, the pin-up girl of squash in India, became a household name after her famous win in women’s doubles event in the 20th Commonwealth Games along with Joshnna Chinappa in Glasgow. A smart young talent from Chennai, Dipika Pallikal is the first Indian to break into the top 10 of the WSA Squash rankings when she climbed three places to the 10th spot in 2010. She was also the first Indian woman to break into the top 20 of the WSA rankings. Pallikal is coached by six-time world champion Sarah Fitz-Gerald of Australia.

Gagan Narang, an eight-time Gold medallist at the Commonwealth Games, won Bronze medal in the recently concluded Commonwealth Games at Glasgow. In his third Asian Games, Gagan Narang will be aiming for his first gold medal. After winning two bronze medals in the 2006 Asian Games at Doha; he went one better at Guangzhou by claiming two silver medals.

A former Olympic and World champion, Abhinav Bindra is one of India’s biggest title hopes in the 2014 Asian Games at Incheon. In the 2008 Beijing Olympics, he became the first and only individual gold medallist for India. Abhinav Bindra has won gold medal at the Commonwealth Games four times, but the top honour eludes him in the Asian Games. His best performance at Asiads came in 2010, where he won a silver medal.

Satish Sivalingam emerged in the global scene with a gold medal in the men’s 77kg weightlifting category in the recently-concluded Commonwealth Games in Glasgow. With his 149 kgs snatch at Glasgow, he broke the then Commonwealth Games record in the 77kgs category. Keeping up with the family’s tradition, he bettered his father Sivalingam, who himself was a national level gold medallist weightlifter.

Sania Nehwal became the first Indian to win a medal in Badminton at the Olympics, a bronze medal at the London Olympics 2012. One of India’s biggest medal hopes, she comes into Asian Games 2014 in Incheon after failing to participate in the recently-concluded Commonwealth Games at Glasgow. Currently ranked number 7 in badminton, she had reached a highest ranking of number 2 in December 2010 by Badminton World Federation.

PV Sindhu or Pusarla Venkata Sindhu is among the list of players who are doing India proud in Badminton and giving hope to the next generation to pursue the sport. The 19-year-old’s performances received recognition and she was then part of India’s national squad for the Uber Cup that year. 2011 proved to be another prosperous year for Sindhu as she clinched the gold medal in Girl’s Singles category at the Commonwealth Youth Games as well as the bronze in Asian Junior Championships.  The Asian Games in Incheon puts the teenager on a big stage yet again. The gold will certainly be the target but whether Sindhu will be able to realize her potential, remains to be seen!

Despite the failure in the current Commonwealth Games held in Glasgow, Krishna Poonia earlier led the Indian contingent which famously clean swept the discus throw event at the 2010 Commonwealth Games in Delhi, where she won the gold medal with a throw of 61.5 metres. She went on to become only the second Indian to win gold in track and field events at the Commonwealth Games after Milkha Singh in 1958. Krishna Poonia won the bronze medal at the 2006 Doha Asian Games, where she threw a personal best of 61.53 metres. Since then she has went on to win medals at the Commonwealth Games and has also qualified for a finals event in track and field events in the Summer Olympics, becoming only the third Indian woman and the sixth Indian athlete to achieve that feat.

Devendro Singh Laishram is the younger brother of Sushila Devi, a former national boxing champion who currently trains him. The 22-year-old youngster came to limelight in the international circuit with a silver medal win the 2014 Commonwealth Games in Glasgow. Earlier in the 2012 Olympic Games, Devendro reached the quarter finals in London beating the Beijing Olympics silver medalist Pürevdorjiin Serdamba 16–11. However, he lost in the next bout against the eventual bronze medalist Paddy Barnes. In the 2014 Commonwealth Games, again he lost to Barnes in the final, to eventually settle for bronze in the 49kg weight category. Earlier in 2013, Devendro bagged silver in the ASBC Asian Confederation Boxing Championship and later won a bronze in the FXTM International Limassol Boxing Cup. Later in February 2014, Devendro won gold at the Bocskai Invitation Tournament in Hungary. A lot rests on the Indian wrestling contingent and Devendro Singh to bring home a medal in the upcoming Asian Games.

Nicknamed Magnificent Mary, Mary Kom is one of India’s biggest medal hopes. Apart from winning the bronze medal at the 2012 Summer Olympics, she has also won the Arjuna Award, the Padma Shree and Padma Bhushan award as a citizen of India. She also won the Rajiv Gandhi Khel Ratna in 2009, India’s most prestigious sports award. The five-time Amateur World Champion is still one of India’s biggest medal hopes this year at the Asian Games.