Saurav Ghosal will meet the winner of Almezayen Abdullah (Kuwait) and Ho Yin Lee (Hong Kong) for the singles title. 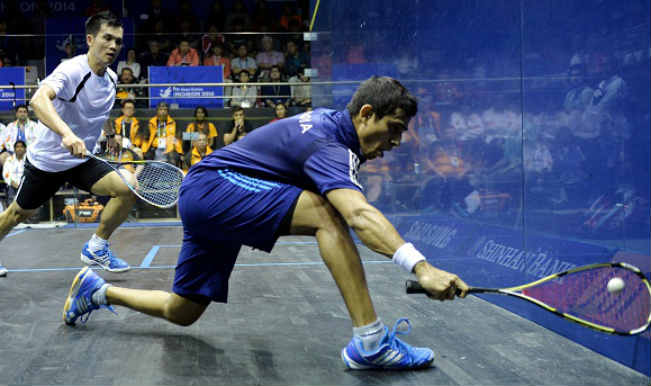 Top seeded Saurav Ghosal of India beat Ong Beng Hee Malaysia in straight games 11-9, 11-4, 11-5 to advance to his maiden Asian Games singles finals. The 28-year-old player from India played like a true champion to dispatch the Malaysian challenge in 45 minutes. Saurav Ghosal never looked in any kind of pressure except for the opening game that took him 19 minutes to close down the first game 11-9 against Beng Hee. The next two games were a cake walk for the determined Ghosal as he stormed into finals.  Catch the Live Updates of Day 3 of Asian Games 2014, Incheon here Also Read - Jawaharlal Nehru Stadium in New Delhi to be Redeveloped at a Cost of 7,850 Crore

Saurav Ghosal will meet the winner of Almezayen Abdullah (Kuwait) and Ho Yin Lee (Hong Kong) for the singles title on September 22 at 09:30 am IST. This will be Ghosal’s first major win at any multi-sports platform. Also Read - I Regret Becoming a Cyclist, All I Now Want is my Old Life Back: Swaran Singh

Earlier, in a one-sided semifinals match, Dipika Pallikal was tamed by Nicol David in straight games 4-11, 4-11, 5-11. Nicol who has won the Asian Games gold medals on five occasions, defeated Pallikal in mere 25 minutes. But the good news for Dipika Pallikal is that she followed her glorious march from Glasgow to Incheon. She had won gold medal in the doubles match along with Joshna Chinappa and has now won a bronze medal for herself and India in the 17th edition of Asian Games.