The 28-year-old, Shweta Chaudhary, controlled her nerves during the final four elimination where she faced another Chinese opponent Zhou in a shoot-off after being tied at 157.3 points. 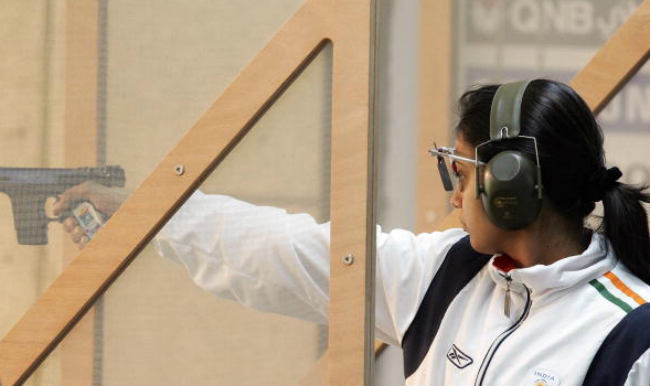 Shweta Chaudhary helps India start off the Day 1 of Asian Games 2014 on a bright note as the World No. 46 shoots a third place finish to bag the bronze medal in the women’s 10m air pistol finals. This also happens to be India’s first medal in the 17th edition of Asian Games. Shweta Chaudhary finished tenth in the qualifying stage as her counterparts Malaika Goel and Heena Sidhu failed to find berth in the final 10. Shweta started off well to lead after six rounds of shots but the Chinese girl Zhang Mengyuan topped to eventually win the gold medal. Also Read - COVID-19: With Spike of Over 96,000 Cases, India's Tally Crosses 52-Lakh Mark, Deaths Near 85K

The 28-year-old, Shweta Chaudhary, controlled her nerves during the final four elimination where she faced another Chinese opponent Zhou in a shoot-off after being tied at 157.3 points. She hit the bull’s eye with 10.7 shot while her Chinese opponent hit a 10.0 to assure a bronze medal on the opening day of Asian Games 2014 after 16 shots. Also Read - Trump Identifies India, 20 Other Nations As Major Drug Transit Or Major Illicit Drug-Producing Countries