Displaying his never-say-die attitude, Yogeshwar was stupendous in all his three bouts in the day. 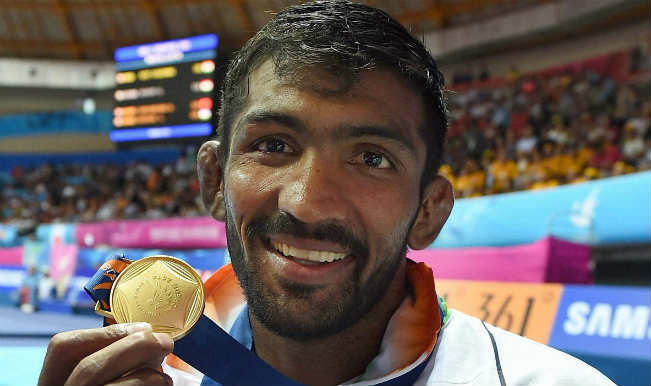 Incheon, Sep 28: Yogeshwar Dutt ended India’s 28-year-old wait for an Asian Games wrestling gold medal but his compatriots Babita Kumari and Satywart Kadian missed out on the bronze at the Dowon Gymnasium here Sunday. Yogeshwar, Olympic bronze medallist, put on a stupendous show in winning 3-0 in the title-clash against Zalimkhan Yusupov of Tajikistan. Yogeshwar’s gold in men’s 65kg freestyle was India’s first since 1986, when Kartar Singh had won the yellow metal in the Seoul Games. Also Read - COVID-19: With Spike of Over 96,000 Cases, India's Tally Crosses 52-Lakh Mark, Deaths Near 85K

Displaying his never-say-die attitude, Yogeshwar was stupendous in all his three bouts in the day. He started the day beating Jinhyok Kang of North Korea 3-1, in his quarterfinal bout to set-up a clash with China’s Katai Yeerlanbieke in the semi-finals.
Against the Chinese, Yogeshwar looked in all sort of problems in an energy-sapping bout. Yeerlanbieke led throughout the game and with only a few seconds remaining he was ahead 9-7. But Yogeshwar made a stunning comeback in the dying moments of the game to pin down the Chinese and won the match 5-0 in a ‘victory by fall’ verdict. Also Read - Trump Identifies India, 20 Other Nations As Major Drug Transit Or Major Illicit Drug-Producing Countries

In the grueling final against Yusupov, Yogeshwar was very watchful. Yusupov tried all the tricks to pin down Yogehswar but the Indian was too quick. Yogeshwar opened his account at the end of the opening period. In the second period, a series of quick moves helped Yogeshwar earn two more points to get a 3-0 verdict.

Other Indian grapplers in the fray for medals, Babita and Satywart, were beaten comprehensively by their opponents in the bronze medal matches. Another wrestler Jyoti, however, lost to Burmaa Ochirbat of Mongolia 4-0 in the quarterfinals of the women’s 75kg freestyle event.

Commonwealth Games gold medallist Babita was outplayed by China’s Xuechun Zhong, who won the women’s 55kg freestyle bronze medal 2-10. Babita was not aggressive at the start and was also cautioned by the referee. She was completely taken by surprise with quick moves and strong counter-attack from Zhong.

Satywart went down 0-3 in the bronze medal match of the freestyle 87 kg to Mamed Ibragimov of Kazakhstan. He lost his quarterfinal bout to Magomed Musaev of Kyrgyzstan 1-3 in a ‘decision by points’ verdict, but made it to the repechage round after Musaev qualified for the final, where he lost 1-3 to Iranian Reza Yazdani. In the repechage, Satywart was too strong for Pakistan’s Bilal Hussain Awan. The Indian won 12-0 on great technical superiority to make it to the bronze medal play-off.