The poster claimed in detail that CM Nitish Kumar has been missing for 90 days, expressed in minutes, seconds and hours, questioning where and why he was in "hiding".

On Monday morning, Patna woke up to yet another giant poster, one that read, “If Nitish does not come out of the CM House, RJD will beat the drum in entire Bihar on completion of 100 days.” Tejashwi, son of Bihar’s former Chief Minister Lalu Prasad Yadav, put up these posters right outside RJD’s state office for the second time in the day. Also Read - Woman, Raped Repeatedly by Father, Kills Her Baby Before Committing Suicide in Bihar's Gaya 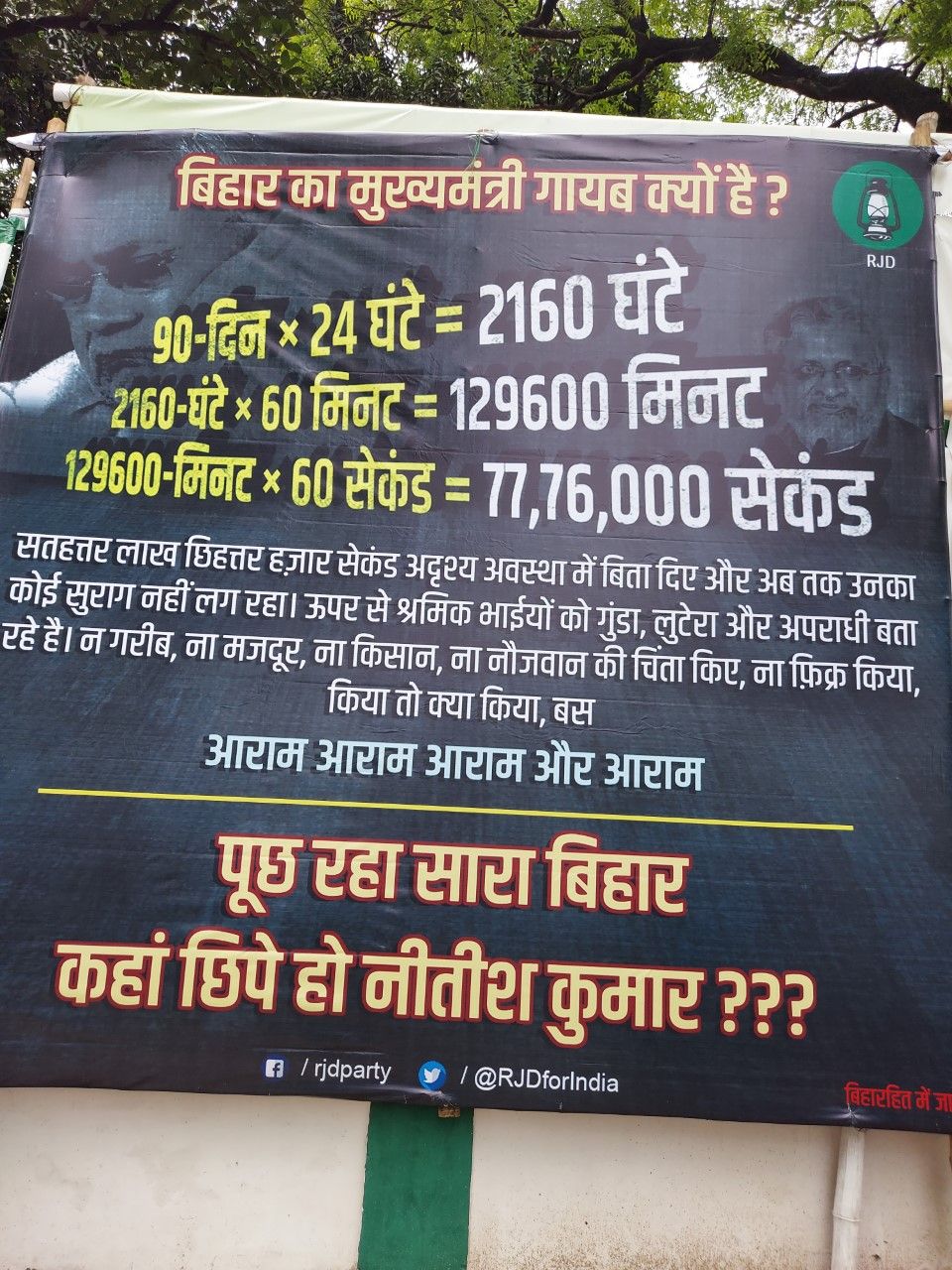 The poster claimed in detail that CM Nitish Kumar has been missing for 90 days, expressed in minutes, seconds and hours, questioning where and why he was in “hiding”. If the state supremo does not come out in the next ten days, the poster stated, RJD will rattle about till Kumar exits.

While political leaders across the country have been holding virtual rallies, conferences and dialogues amid the lockdown due to coronavirus pandemic, the ally-turned-rival parties in Bihar seem to have struck a new fire.

Tejashwi said that the poster will be erected all across Bihar, because the Chief Minister is not leaving from CM House. He said that the cases of corona in the state are constantly increasing, but the Nitish government is not paying attention to it. The government is only focused on elections and the public has left it up to God, he said.

“BJP wants to conduct elections on a pile of corpses. A few kilometres away from the Chief Minister’s residence, there are two big hospitals – PMCH and NMCH – that the CM should visit. He should see the horrible condition and lack of proper ventilators.

Tejashwi Yadav highlighted that the government claims to have brought back more than 30 lakh labourers from other states, but without any investigation.

The JDU had, on June 11, put up posters across capital city Patna claiming a list of 73 properties illegally acquired by Yadav and his family using political influence.

Bihar: Poster put up by RJD leaders, wishing Lalu Prasad Yadav on his birthday, & another poster put by JD(U), claiming to be a list of 73 properties acquired by him & his family using political influence, seen side-by-side in Patna.

This reignited a political skirmish that began last year during the campaigning of the upcoming Assembly polls in Bihar, scheduled for later this year.