Malik released a futuristic-style music video for his newest single, “Like I Would,” on Monday, but Banks quickly claimed that it too closely paralleled her music video for “Yung Rapunzel.”

The controversial rapper, Azealia Banks, stormed into a racist and homophobic Twitter battle with Zayn Malik last night after accusing him of copying her music video. Malik released a futuristic-style music video for his newest single, “Like I Would,” on Monday, but Banks quickly claimed that it too closely paralleled her music video for “Yung Rapunzel.” Although the British pop star did not directly engage in the accusation, he tweeted “No lies…I see you reaching but I don’t care” and “My @’s too good for you.”

And that made her completely LOSE it.

Banks starts off by saying she’s going to start calling him “Punjab” as a slur. Little does she know that Punjab is a state that spans two countries (India and Pakistan) and is home to five rivers, not just the Ganga that she refers to as the “shitty river.” 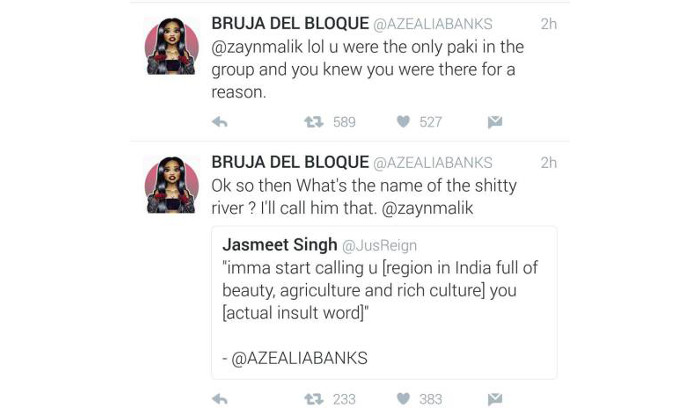 Then she called Malik a “curry scented bitch,” which quickly turned into a Twitter hashtag. Essentially, Brown Twitter reclaimed the insult by posting sarcastic tweets accompanied by selfies as a way to steal away the power of degradation from Banks.

Not stopping there, she dropped “Paki” and “sand n****” as insults due to Malik’s religious and racial background. Ironically enough, Banks wore a bindi and other South Asian jewelry in her videos. If you watched her recent Periscope, you could see a picture of Durga Maa, a Hindu goddess, hanging up behind her. But no big deal, she can continue taking digs at our heritage and culture.

Banks also called him a  f*****, an offensive, and anti-LGBTQ+ slur and accused him of giving his fans her cell phone number.

She even went as far as saying Malik’s mother was a “dirty refugee who would never be granted asylum.” Never mind the fact that Malik’s mother is an English woman who happens to be a British citizen. His father is Pakistani-British, and the family has been living in England for years. 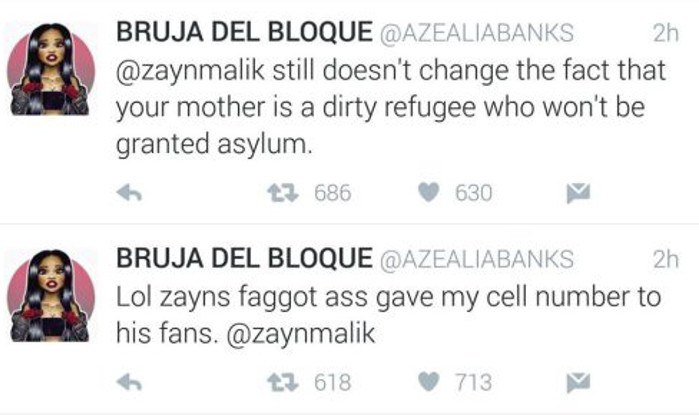 While Banks is angry and upset at Malik for supposedly stealing her ideas, it should also be noted that Malik most likely received his inspiration for his video from the comic “Ghost Rider.”

Nonetheless, Banks is full of hatred and ignorance and often contradicts herself having earlier called him a “cutie pie” and then bashing him on Twitter. Not only does she have no clue that Punjab is a state, not a slur, and that Malik’s mother never was nor is a refugee, but she also lacks sensitivity towards multiple communities, such as the LGBTQ+ community and various religions. Despite all of the ignorant tweets she’s been spitting out on Twitter, the desi community has, for the most part, responded with humor and love. Just check out #CurryScentedBitch on Twitter if you don’t believe us.

This is not an excuse to show her hatred, but rather a time for us to respond with love and education. We should not be combating her ignorance with anti-blackness and racial slurs. Instead, we should remind the desis exuding anti-blackness that fighting fire with fire does not work and never will.

Meanwhile, here is Malik’s “Like I Would” video for you to enjoy.