Growing Up In The Dawoodi Bohra Muslim Community of Shia Islam

“There are Muslims in India?” You don’t know how many times I’ve been asked that by friends and acquaintances who are not from a South Asian background. 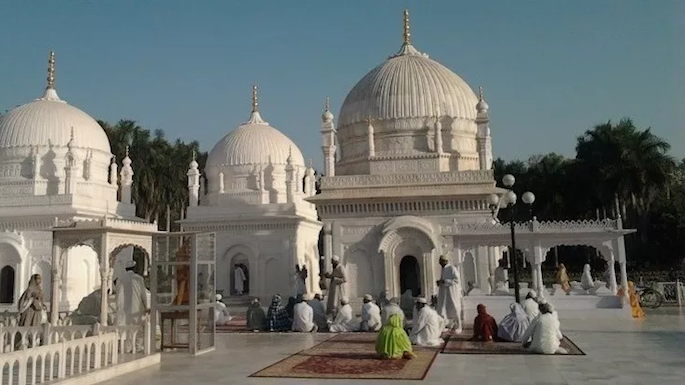 By Mariya Taher Also Read - Wajid Khan's Wife Kamalrukh Makes New Allegations About Being 'Forced to Convert' to Islam, Says 'His Career Was at Stake'

“There are Muslims in India?” Also Read - 'In The Memory of The Man of Pleasure': Alcoholic Drink Named After Pakistan Founder Jinnah

You don’t know how many times I’ve been asked that by friends and acquaintances who are not from a South Asian background.

Even acquaintances of  South Asian descent who are not Muslim have mispronounced my name because to them it is an unusual name. My name is  pronounced Mar-ee-yah. Not Maria like in Spanish, or Mariah like in Mariah Carey. So, at many points in my life I’ve felt like an oddity, unsure of where I belong and which groups I could identify with.

I come from a small Islamic Sect:  the Dawoodi Bohra Muslim community based primarily out of Mumbai, India. They are an even smaller minority within the minority of the Muslim population in India. This is the tradition in which I was raised.

Within the Muslim community, there are two main branches: Sunni Islam and Shia Islam.  This original Sunni/Shia split arose in the wake of a dispute after the death of the Prophet Muhammad over who should lead the Muslim community. Sunnis believed that Abu Bakr, the father of Muhammad’s wife Aisha, was the rightful successor, and that the method of electing leaders should be based on the consensus of the Ummah (The Muslim community). The Shias, on the other hand, believe that Ali, the son-in-law of the Prophet Muhammad and his descendants were divinely ordained to lead the Islamic community.

These branches are further sub-divided into multiple sects. The Dawoodi Bohras are a member of the Shia branch. Here’s a diagram showing the split and emergence of the Dawoodi Bohras. 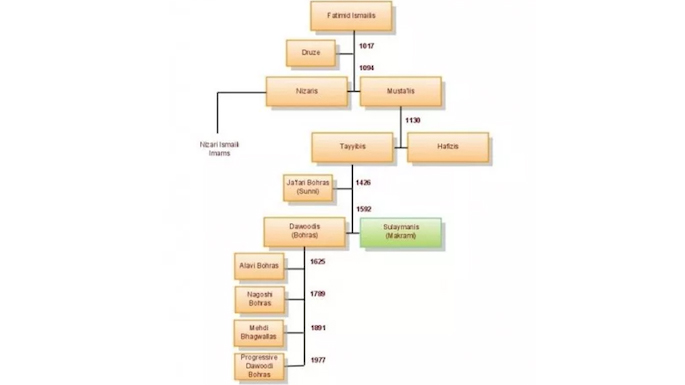 Shia Muslims believe that the Prophet’s descendants are the rightful leaders of the Muslim community. This line of successors were given the title of Imam. For Sunnis, an Imam is generally the person who leads prayers at a mosque however, Shias give this title a significantly greater weight. Shias see the Imam as the one who has inherited the responsibility and role of guidance for the entire Muslim community. For Shias, there can only be one supreme authority or Imam at a time. Each Imam succeeds one another through an explicit designation, known as

Each Imam succeeds one another through an explicit designation, known as nass. This claim to having received nass from the previous Imam has led to a number of succession disputes that still occur to the present day within the Shia community, which have also led to the further formation of several sects within the Shia.

One such lineage is the Ismaili community, to which the Bohras also belong to. However, here again, the Ismailis are divided further into multiple groups. The Bohras belong to the Musta’li Ismailis, and believe that the current Imam is in hiding from his enemies, and has been for centuries. Nonetheless, the Bohras believe that this Imam is still physically present in this world.

Since the Musta’li Imam is in hiding, the Bohras have invoked a sub-hierarchy of spiritual leadership which they inherited from the rule of the Fatimids, an important Shia dynasty based in Egypt in the 10th to 12th centuries. These rulers of Cairo were considered Imams. Beneath them in the religious hierarchy were the da’is, emissary-missionaries who were responsible in spreading this version of Islam to the world.

Today, in the physical seclusion of the Imam, the Musta’li Ismailis have been led by a series of these da’is, the most important of which is the da’i al-mutlaq. This is a position that is now occupied by Syedna Mufaddal Saifuddin, who provides guidance to the Dawoodi Bohra community. The da’i al-mutlaq have led the community for 53 successive generations. 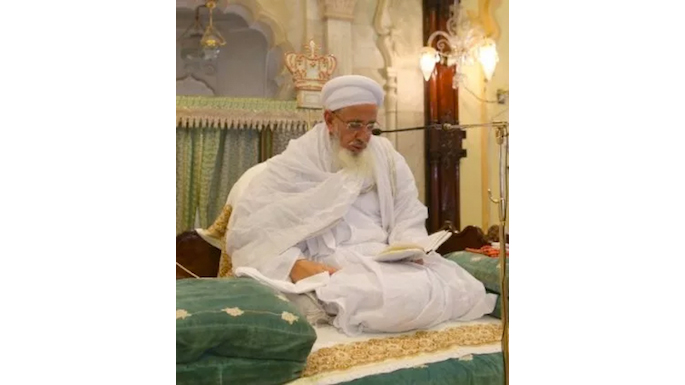 Even if the above explanation and the above diagram doesn’t make complete sense to you at this point in the article, what’s important to understand here is that Shia Muslims are a diverse cohort whose communal histories, geographies and relation to power, have led to great diversity amongst them in their practice and theologies. Most studies suggest that Shia Muslims make up about 15 to 20 percent of the world’s 1.6 billion Muslims. Within this portion of Shia Muslims, Dawoodi Bohras are said to have one million followers worldwide, a very small chunk within the larger Shia community.

Hopefully, in the next few articles in this series, I can shed more light on this small religious community, whose headquarters are based in Mumbai India in the Bhendi Bazaar district, and whose followers are found the world over, including in the United States, where I was born.