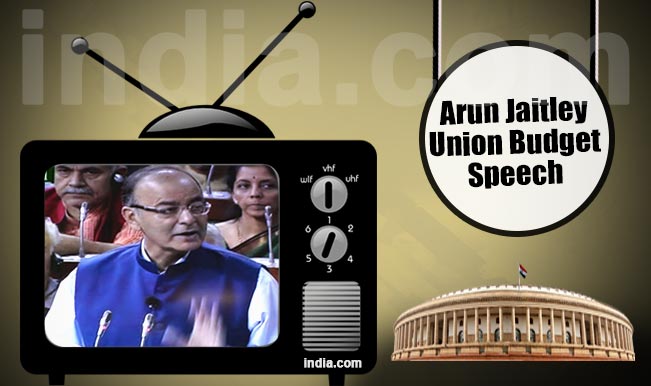 Finance Minister Arun Jaitley on Saturday announced the Union Budget in Lok Sabha for the financial year 2015-16. The budget was a first-full year budget for the Narendra Modi-led government after it presented the interim budget in July last year. Couple of days after Railway Minister Suresh Prabhu presented Railway Budget 2015-16, it was Arun Jaitley who delivered a hour long speech in Parliament setting ground for India’s next financial year. Also Read - New Vistadome Jan Shatabdi Express For Ahmedabad to Kevadia From Today | In Pictures

The major highlight in the Budget 2015-16 was when Finance Minister Arun Jaitley reiterated his government’s stand on bringing back the black money. The Finance Minister said, “On black money, a new structure including e-filing and tracking down is our abiding commitment. A comprehensive new law to track black money would be framed.” Tightening noose on the black money holders, Jaitely said, “There will be rigorous imprisonment of 10 years under black money law.” Also Read - PM Modi Launches India's Vaccination Drive, Gets Emotional as he Thanks Frontline Workers | Top Quotes From His Address to Nation

In another major announcement, Finance Minister Arun Jaitley announced that there will be 100 per cent exemption from tax for contributions to Swachh Bharat Kosh and the Clean Ganga Kosh.

For the cause of women safety, Arun Jaitley said that his government will double the Nirbhaya Fund to Rs. 2,000 crore from existing 1,000 crore. “The government is committed to safety and security of women, and another Rs.1,000 crore has been allocated to the Nirbhaya Fund,” said Jaitley while presenting the Union Budget 2015-16.