7th pay Commission Latest News Today 26 June 2021: Issuing a clarification, the Union Ministry of Finance said that the Office Memorandum (OM) is fake and no such OM has been issued by the Central government.

7th Pay Commission Latest News Today: On a day when the Central government has scheduled to hold a meeting to take a call on the pending Dearness Allowance (DA) and Dearness Relief (DR) of 52 lakh central government employees and 60 lakh central government pensioners, the Union Ministry of Finance on Saturday issued a clarification saying it has not issued any Office Memorandum regarding restoration of DA and DR from July 1 as a document has been doing rounds on social media. Issuing the clarification, the Union Ministry of Finance said that the Office Memorandum (OM) is fake and no such OM has been issued by the Central government.Also Read - 7th Pay Commission: From DA Hike to PF Interest Rate, Govt Employees Likely to Get 3 Big Gifts in July

“A document is doing rounds on social media claiming resumption of DA to Central Government employees and Dearness Relief to Central Government pensioners from July 2021. This Office Memorandum (OM) is fake. No such OM has been issued by GoI,” the Ministry of Finance said in a statement. Also Read - PKGKAY Scheme: No More Free Food Grains After September? Check What Finance Ministry Said

Earlier, various media portals carried the news that the DA and DR of the Central government employees will be hiked from July 1 as has been announced in the Parliament. Reports also claimed that the Central government in the Parliament had said that the pending DA and DR revisions will resume from July 1, 2021. However, the Ministry of Finance has now called it fake and refuted such claims. Also Read - 7th Pay Commission Latest News : Govt Employees Likely to Get DA Hike in July, Minimum Wage May Increase to Rs 26,000

Copy of the fake memorandum: 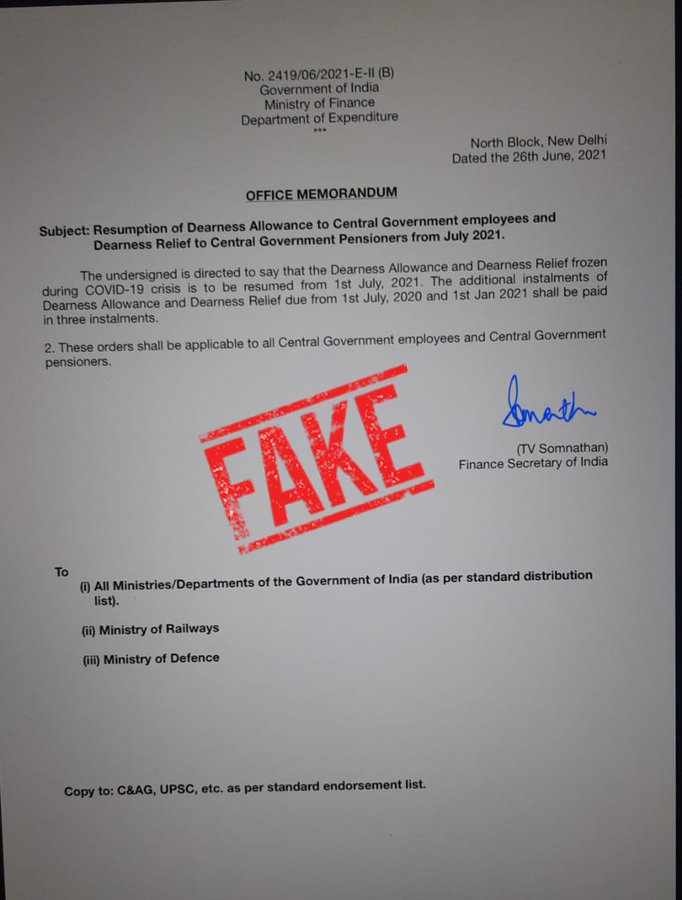 The dearness allowance, currently paid at the rate of 17 per cent, is likely to be raised by 11 per cent, taking the total percentage hike to 28 per cent, according to reports

In the crucial meeting, the Union Ministry of Finance, the National Council of Joint Consultative Machinery (JCM) and the Department of Personnel and Training (DoPT) will take a decision on restoring the DA and DR based on the recommendation of the 7th Pay Commission.

Speaking to Mint, Shiva Gopal Mishra, Secretary — Staff Side at National Council of JCM earlier had said that the meeting of the Finance Ministry, JCM and DoPT officials will be chaired by the cabinet secretary of India.

Due to the COVID pandemic, the DA hike to central government employees and DR hike for pensioners have not been revised since January 1, 2020 and three instalments due on the above dates have been frozen due to pandemic.