In the letter, the Air India Unions demanded that employees should be allowed to stay in airline flats till monetization or at least for a year as Tatas are giving a one-year employment guarantee.

New Delhi: Days after the Central government announced Tata Sons as the winner of the bid for the national airlines, the Air India Unions on Wednesday wrote a letter to Secretary, Ministry of Civil Aviation and raised their concerns over cash, leave, medical benefits, accommodation of employees and arrears.Also Read - International Flights: AirAsia India Gets Security Clearance, Likely to Get Global Flying Permit Soon

In the letter, the Air India Unions demanded that employees should be allowed to stay in airline flats till monetization or at least for a year as Tatas are giving a one-year employment guarantee. Also Read - 7th Pay Commission: Festive Bonanza For Central Govt Employees, They Are Likely to Get Benefits up to Rs 30,240

“As unions, we demand that the option to encash or carry forward immediately our PL/SL be clarified before the handover. Those who opt to encash it now may commence with new leave accounts, and those who have opted to carry forward may be credited with that leave balance,” the unions added in their letter. Also Read - Cupboard Full of Currency Notes Discovered in Hyderabad, Money Worth Over Rs 142 Crore | See Image

It must be noted that the Centre on Friday announced that Tata Sons’ winning bid of Rs 18,000 crore was higher than the reserve price of Rs 12,906 crore set by it.

Copy of the letter: 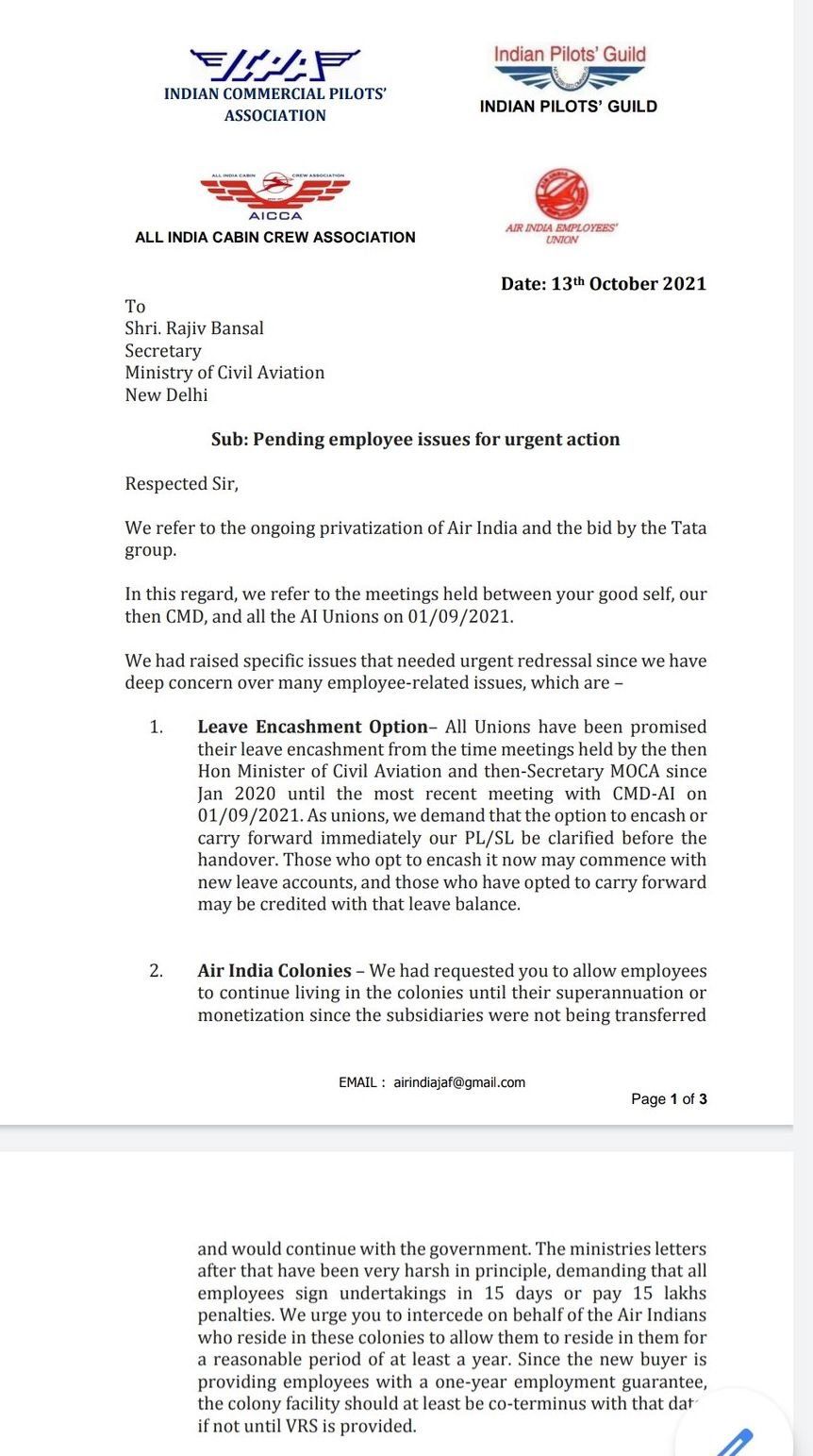 “We are most happy to hear that it will be the Tata group that is taking us over. We look forward to giving this company our best. And, in return, we are sure that the Tata group will ensure that a mutually beneficial working relationship will be kindled over the years,” said a committee member of the Indian Pilots’ Guild, the Boeing pilots’ union of Air India.

Separately, the Guild in a tweet said, “@GuildPilots is proud that @airindiain is an airline founded by India’s first licensed pilot and that the airline is going back to the Tata Group… We look forward to being a part of the #tatafamily.”

The Indian National Commercial Pilots Association (ICPA), the Airbus pilots’ body of Air India, said it has great hopes from the new employer.

ICPA General Secretary Praveen Keerthi said, “The Tata group is well known for taking care of its employees. Even during the pandemic, the employees of Vistara were better looked after than Air Indians. We have great hopes from the new employer and are excited and apprehensive at the same time.”

The All India Cabin Crew Association, which claims to represent a majority of the cabin crew members in Air India, said in a tweet, “…it is a #Gharwapasi for our great #Airline… historic #aviation moment.”