Alibaba Too Partly Offloads Zomato Shares. All Is Well Within The Company?

Only this month, November, the food delivery and restaurant aggregator saw the exit of three top leaders -- last one being none other than co-founder Mohit Gupta.

Mumbai: Alibaba will today be offloading around 3 per cent shares in food delivery platform Zomato through a block deal. According to reports, Morgan Stanley will be brokering the deal. The Chinese e-commerce giant will be selling 262.9 million shares in Zomato for $193 million. The sale will take at an offer price of ₹60 per share — a 5.59 per cent discount to Tuesday’s closing price of ₹63.55 apiece on the BSE.

In 2018, Alibaba Group, through Ant Financial invested $210 million for a 14.7 per cent stake, and later, the stake was raised to 23 per cent. Alibaba Group is one of the five major shareholders that have sold Zomato shares in the past two years. Sequoia Capital, Tiger Global, Uber, and Delhivery Home are the others. While Sequoia Capital reduced its stake in Zomato from 6.4 per cent to 4.4 per cent back in September-October 2021, Delhivery Hero sold its complete 1.6 per cent stake in Zomato in July this year; Tiger Global, which held a 5.11 per cent stake in Zomato, reduced it to almost half (to 2.77 per cent) by selling over 18.45 crore shares in the open market. Uber exited Zomato back in August 2022 by selling its entire 7.8 per cent stake.

Only this month, November, the food delivery and restaurant aggregator saw the exit of three top leaders — last one being none other than co-founder Mohit Gupta. Rahul Ganjoo, who was the new incentives head, and Siddharth Jhawar, the former head of Intercity Legends service were the two other high-profile exits that Zomato witnessed this month. Another co-founder Gaurav Gupta quit two months after the company went public.

“MG (Mohit Gupta) – you have been a brother, and a friend to me over the last few years. You have done a tremendous job here, brought us back from the brink of extinction, scaled the business to new heights, got us to profitability, and above all, coached me over the years to become capable of running such a large and complex business,” Zomato founder and chief executive Deepinder Goyal said in a note, according to a regulatory filing.

Zomato has been in the spotlight for good and bad reasons ever since its big bang listing after the firm’s initial public offering. Zomato stock got listed on the National Stock Exchange (NSE) at ₹116 per share — a 53 per cent premium on its final offer price of Rs 76. After the bumper listing, Zomato’s market capitalisation soared over Rs 1 lakh crore, highlighting the strong stock market debut. Zomato stock hit a record ₹159.75 in November 2021.

Then the downfall started.

Foreign investors started dumping emerging market equities amid a global slowdown. The share price of Zomato fell as much as 55 per cent in 2022. At 1:45 pm IST, Zomato was being traded at ₹64.30 which is 48.97 per cent less than the listing price — even below the IPO issue price. 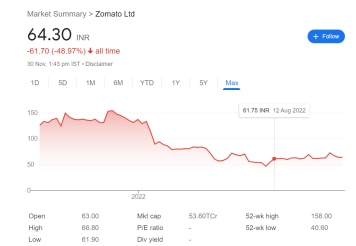