Patanjali Ayurved scripted history this year and has made a name for itself in the Indian and well as global market. However, the customers put their faith in Patanjali and its products which helped the firm achieve the feat.

New Delhi, April 9: All the complaints notwithstanding, Yoga Baba Ramdev’s Patanjali hs leaped from 173 rank to the 15 position in the latest Brand Trust Report 2017. This speaks volumes about Ramdev’s business unit which remained in news for all the wrong reasons. However, the customers continued to put their faith in Patanjali and its products which helped the firm achieve its magnificent feat.Also Read - How ZEEL-Sony Merger Will Become a Profitable Pact For Minority Shareholders

Patanjali Ayurved scripted history this year and has made a name for itself in the Indian and well as global market. According to the Brand Trust Report Samsung, Sony, Apple, Tata Group, Honda, Maruti Suzuki, Dell, Lenovo, Bajaj, Hewlett Packard, Bata, State Bank of India, Nokia and Patanjali are amongst the top 20 most trusted brands in India. As per the Brand Trust Report, Samsung was at the 18th position in 2016 and has made it to the top this year while US-based iPhone maker Apple, which was at the 16th position in 2016 is now the 4th most trusted brands in India. The other brands, Sony, LG and Tata Group, however, managed to retain their 2016 ranking even this year. Also Read - Maruti Suzuki Price Increase: Automaker Hikes Prices of Select Models 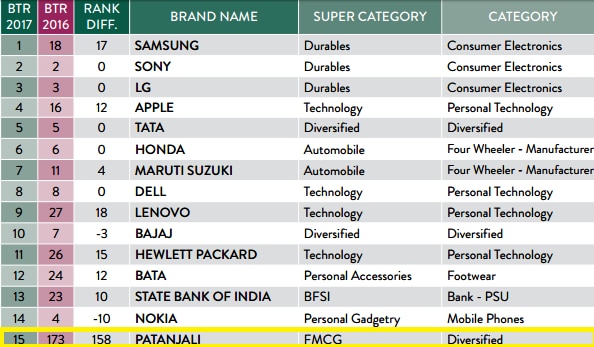 Patanjali emerges as one of the most trusted brand

After giving a tough competition to multiple FMCG giants in India’s domestic market, Ramdev’s Patanjali Ayurveda is all set to tap East Asian markets by setting up a production unit in Sahibganj, a district in Jharkhand. Balkrishna Suvedi, often referred as Acharya Balkrishna is the man behind the huge business. Acharya Balkrishna, a close aide of the Yoga guru Baba Ramdev has left no stone unturned to make Patamjali products a huge hit in Indian market and in markets abroad. Also Read - Maruti Recalls Over 1.81 Lakh Cars: Here's How To Check If Your Vehicle Needs Attention

Reports by Mint stated that Patanjali’s planned overseas expansion is in line with the government’s Act East policy. The policy emphasises ties with India’s immediate neighbourhood and in the Asia-Pacific. Patanjali has already set up its production units in Nepal and Bangladesh and it is the first time Patanjali is reaching out to consumers from East Asian countries. 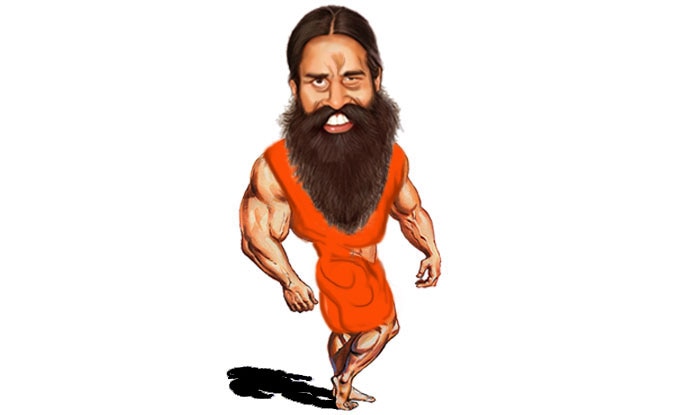 Patanjali Ayurved has a network of over 4,000 distributors and has 10,000 stores. The company has over 100 Patanjali mega marts pan India. Future Group which is India’s one of the largest retail companies has tied up with Patanjali. The group sells about Rs 30 crore worth of the firm’s products every month, reports said. Along with Future Group, Patanjali products are also available for direct sale at Reliance stores, Hypercity and Star Bazaar. 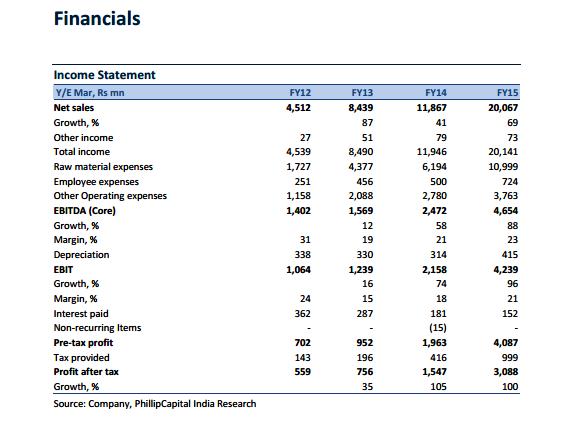 In all, Patanjali manufactures 444 products. According to multinational brokerage company CLSA, Patanjali is the fastest growing fast-moving consumer company in India. These products include 45 types of cosmetic products and 30 types of food products. Patanjali claimed that all the products manufactured by Patanjali are made from Ayurveda and natural components.

Earlier, there have been reports citing samples of Patanjali products consisting cow urine and being of low quality. Some of the products that have anguished Patanjali customers are like its ghee being labeled adulterated, Patanjali noodles packets in Haryana containing insects and fungus in its Desi Ghee bottles from Dehradun have been reported in the past. As per a report by Naradanews.com, the Health Safety and Regulation Directorate as given a clean chit to the food products manufactured by Ramdev’s Patanjali Yogpeeth. However, most of its products don’t have FSSAI clearance reported. Patanjali is planning to expand and increase its turnover to Rs 10000 cr in a year as projected by Baba Ramdev. 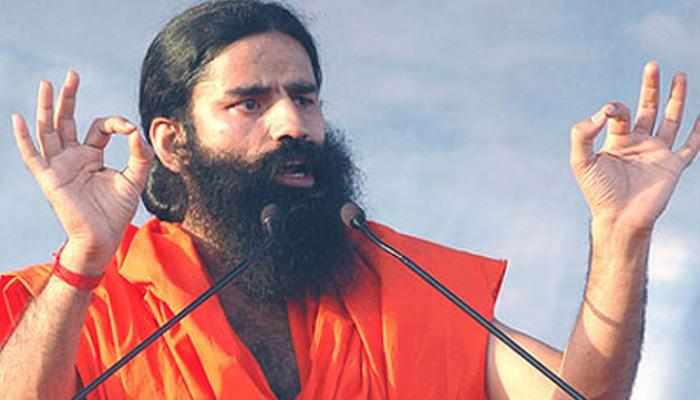 In September  2016, Patanjali Ayurved Ltd was in controversy over charges of misbranding and misrepresentation of its products. A local court in Haridwar had slapped the five production units of Baba Ramdev’s Patanjali Ayurved with a fine of Rs 11 lakh. Meanwhile, advertising watchdog the Advertising Standards Council of India (ASCI) had again pulled up Ramdev-promoted Patanjali Ayurved for running “misleading” ad campaigns that disparages competitors’ products. ASCI said that Patanjali Ayurved “unfairly denigrates” products of its rivals in the advertisements.

The Consumer Complaints Council (CCC) found that Patanjali’s claim for its ‘Kachi Ghani Mustard Oil’ was not substantiated. According to the Patanjali ad, rival makers are selling mustard oil “adulterated with oil made by solvent extraction process with neurotoxin containing Hexane”.  The ad regulator said in its list for the month of April, 2016, in which it upheld 67 complaints against several companies.

Patanjali’ s products are widely used in the country and across the globe for its natural and ayurvedic properties. Moreover, as they claim products are so economical and have no side effects. The company offers with a variety of skin care, beauty, health care and food products. And now they are also providing baby care products. Here is the list of the some of the excellent products from Patanjali and worth buying:

The growth of Patanjali

Baba Ramdev established the Patanjali Ayurved Limited in 2006 along with Acharya Balkrishna with the objective of establishing the science of Ayurveda in accordance and coordination with the latest technology and ancient wisdom. The TRA Research report on brands has been compiled by findings from over 2,505 consumers who participated in the survey across 16 cities. The consumers are between 21 and 50 years of age and belong to SEC A and B with a minimum annual income of Rs 2.4 lakh, Livemint reported. 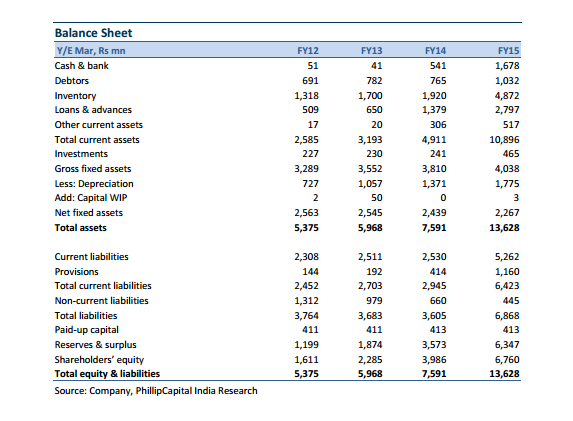 India’s fastest-growing consumer products brand Patanjali has unnerved its competitors with the skyrocketing sales of its products. With revenues reaching INR 20 billion in 2015, Patanjali is run by yoga guru Baba Ramdev and Acharya Balkrishna, an Ayurveda expert. The brand is creating headlines with its various product offerings including cosmetics, food items, personal care, and healthcare products. 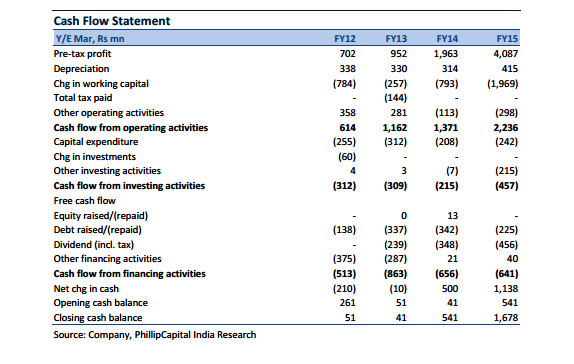 Patanjali currently has three plants near Haridwar and is spread over 170 acres and was set up in 2009 under the government’s Mega Food Park scheme. The concept of Patanjali is based on the traditions of Ayurveda. In Haridwar, Patanjali is set to disrupt the FMCG market, which is so far dominated by MNCs. The company provides employment to more than 10,000 people. Patanjali owns 600 acres in Nagpur, where it will build more capacities. In addition, it plans to set up plants in Karnataka, Assam, and Madhya Pradesh – all part of its plan to expand capacity and increase its manufacturing footprint.