In a circular on April 6, 2018, the RBI had ruled that no entities under its purview shall deal in bitcoins or provide services for facilitating any person or entity in dealing with or settling the same.

New Delhi: The Supreme Court on Wednesday will pronounce its judgement on pleas against the Reserve Bank of India (RBI) circular that barred banks from trading in cryptocurrencies. A three-judge bench of the apex court, headed by Justice RF Nariman, and also comprising Justices Aniruddha Bose and V Ramasubramanian will pronounce its judgement in the case. Also Read - Cryptocurrency: Inter-ministerial Panel Recommends Ban in India, Penalty on Default 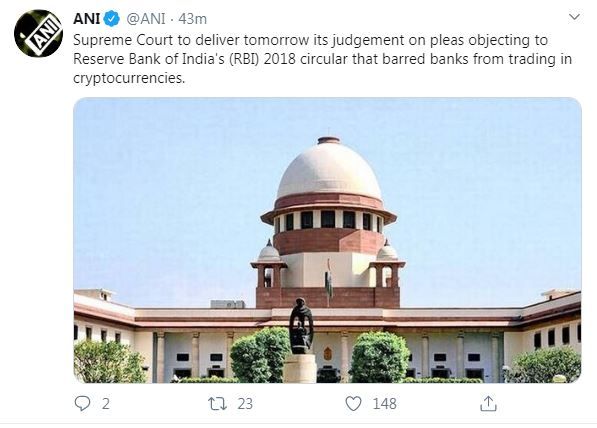 In a circular issued on April 6, 2018, the country’s central bank had ruled that no entities under its purview shall deal in bitcoins or provide services for facilitating any person or entity in dealing with or settling the same. Also Read - 'Details emerging about the death of Canadian cryptocurrency exchange CEO who died in India'

The petition against the RBI circular was filed in the top court by the Internet and Mobile Association of India (IMAI), a body whose members include various cryptocurrency exchanges. Represented by advocate Ashim Sood, it argued in various hearings that cryptocurrencies were more like ‘commodities’ rather than currency, adding that the RBI did not have the jurisdiction to regulate the field.

The body has also argued that trading in cryptocurrencies in the absence of a law banning the same made it a ‘legitimate’ business exercise under the Constitution.

The RBI, on the other hand, through senior advocate Shyam Divan, has argued that while there is no formal ban on cryptocurrencies under any existing law in India, it had been consistently warning those dealing in cryptocurrencies about their inherent danger.

It has called its 2018 circular ‘very proportionate and calibrated.’