June 15: The steep double-fold rise on tomatoes in a day has raised concerns over food inflation in the country. As per Ministry of Consume Affairs, while the prices of a kilogram of tomato in Chennai was Rs 44 on June 1, it increased to Rs 80 on June 14, Mumbai saw an increase of Rs 20 for per kg of tomato. Finance Minister Arun Jaitley will review the situation today and discuss steps to bring the rise under control. Although the government is planning to increase supply though buffer stock and prices, the prices of pulses remained at Rs 170 per kg. Prices of potatoes have also been on rise A per the Wholesale Price Index (WPI) data, vegetable inflation rose to 12.94 per cent from 2.21 per cent a month ago. 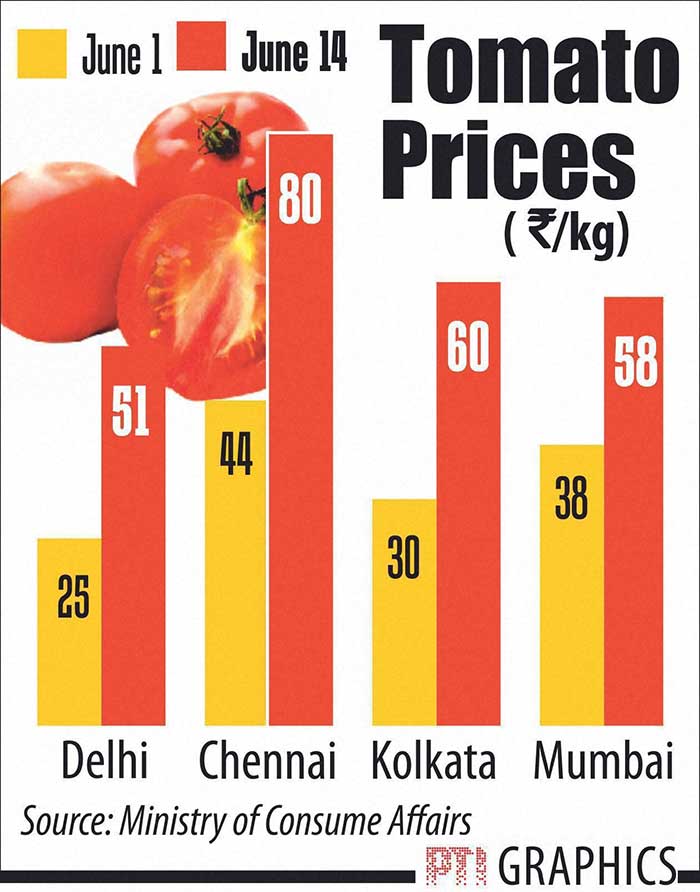 Talking about the inflation, Azadpur Tomato Merchants Association President Ashok Kaushik, said, “Tomato prices have increased in last 15 days in Delhi. There is no sufficient supply as the crop got damaged in Haryana and Punjab because of unseasonable rains.” The crops in South India were affected due to rains, because of which the prices rose, while the heat led to the damage of crops in some parts. (ALSO READ: Tomato prices double to Rs 80/kg on sluggish supply)

The country’s tomato production is estimated at 18.28 million tonnes in the 2015-16 crop year (July-June) while it was 16.38 million tonnes the revious year. States including Karnataka, Madhya Pradesh, Andhra Pradesh, Telangana, West Bengal and Odisha produce tomato in large numbers.