Paying More For Grocery, Vegetables? Here Is How Your Kitchen Budgets Have Increased During Covid Pandemic

The production of food grains, vegetables and fruits in the country has grown considerably during the Coronavirus pandemic. The output of foodgrains and horticultural crops is likely to again break records. Despite this, the budget of homemakers has been upset by rising prices.

New Delhi: The dizzy rise in the prices of cereals, pulses, vegetables, fruits and several eatables has increased the difficulties of the common man in the middle of a resurgent pandemic. With the import of edible oil becoming more expensive and diesel prices rising in the country, items of everyday consumption have become even more expensive. The problems of the common man have been further compounded by the resurgence of Covid-19 cases in the country.Also Read - Viral Video: Cheetah Jumps on Roof of Safari Vehicle in Tanzania, Casually Chills There | Watch

At the nation’s multi-commodity exchange, the price of crude palm oil has risen by 74 per cent in the last one year. Considered to be less expensive than other oils, the price of palm oil has now even surpassed soya oil. Also Read - Brendon McCullum Input to Ben Stokes Helps England Get Shreyas Iyer During 5th Test at Edgbaston | VIRAL PIC 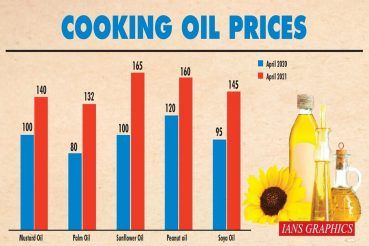 Explains Lakshmi Chand Aggarwal of the Central Organisation For Oil Industry and Trade (COAT): “In the absence of a reduction in import tax of edible oil, even mustard oil prices will cross Rs 200 per litre. Not just edible oil, even the prices of pulses are on the rise.” Also Read - LIVE Ind vs Eng, 5th Test Match Day 4, Updates: Hosts Fightback With Quick Wickets; India Lead by 361

Responding to a question by IANS, Leena Nandan, Secretary, Department of Consumer Affairs, says the situation is being closely monitored. “Steps are being taken the keep a leash over eatable prices. New import quotas have been issued and efforts are being made to raise the output of edible oil in the country.” 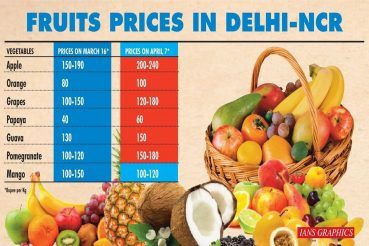 The point to be noted is that the production of food grains, vegetables and fruits in the country has grown considerably during the Coronavirus pandemic. The output of foodgrains and horticultural crops is likely to again break records. Despite this, the budget of homemakers has been upset by rising prices.

As far as vegetables are concerned, with the departure of winter, the arrival of vegetables has led to a slight reduction in prices, but with the mercury rising along with the return of the pandemic, fruits are in short supply. So, the chances of fruit prices decreasing are very less. 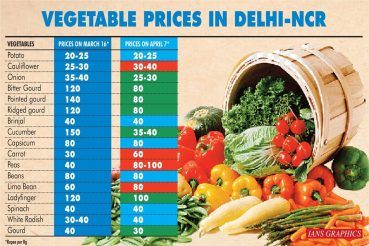 With the supply of wheat increasing, its market price has diminished for sure, but the price of wheat flour has still not gone down.

Neetu Gupta, a resident of Yamuna Vihar, says that rice which was priced between Rs 50 and Rs 60 earlier, has risen to Rs 80 and wheat flour, which was earlier selling for Rs 25 is now selling at Rs 30 to Rs 35 per kg.