Breaking new grounds in the digital space, India.Com has jumped ahead of its competitors namely India Today, The Hindu, Times Now, The Indian Express etc. to firmly cement its position in the 10th edition of Reuters' report on digital news.

One of the fastest-growing news websites in the country, India.Com has managed to win the trust and confidence of its users who flock to the website to read news that actually matters to them. With an emphasis on breaking news, in-depth coverage and analysis of news from India and the world, the website also exhaustively covers trending news and videos, photo galleries, and information about popular tourist places and offbeat destinations. The biggest driver of this growth has been a utility-news based model and an independent and objective approach towards journalism. In just a few years, the website has also become favourite among the youth, which prefers to consume news that is unbiased; and content that is crisp and unpretentious.

Here’s a look at the survey data: 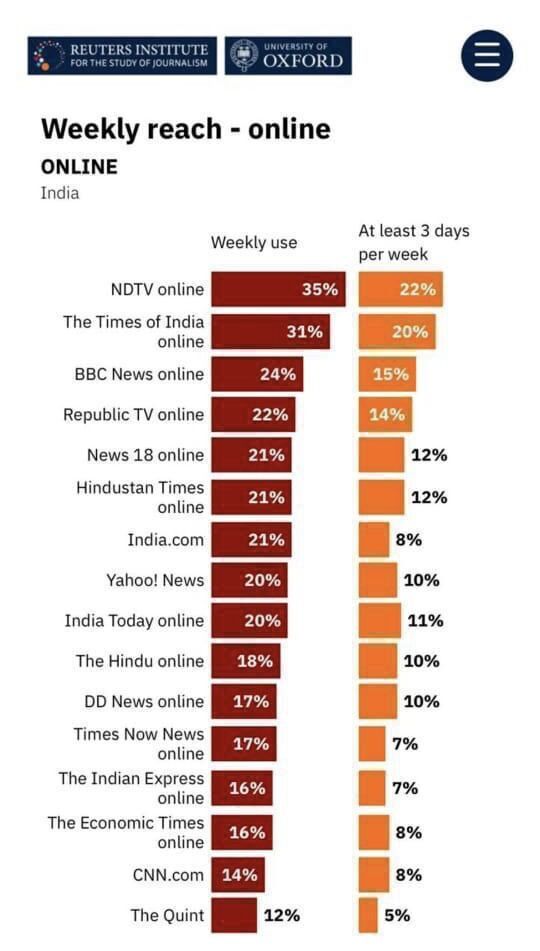 About the Reuters Survey:

Reuters released the 10th edition of its annual digital news report, “Reuters Institute Digital News Report 2021”, on Wednesday based on a series of opinion polls conducted by YouGov, in 46 countries, with more than 92,000 participants in total. The data is primarily based on a survey of mainly English-speaking, online news users in India, and the research was conducted using an online questionnaire at the end of January/beginning of February 2021.According to the survey, India is one of the strongest mobile-focused markets, with 73% of the respondents using smartphones to access news. Overall, 82% of the respondents said they source news online, including on social media, with WhatsApp and YouTube being the top go-to platforms.

Analysing the current trend, Reuters said that consumption of ‘mainstream news’ remained popular in countries with “strong and independent public service media. Though the print media and government broadcasters score high on trust levels in the survey, the former has suffered heavily from the economic slowdown due to the pandemic with decrease in advertisement revenues, resulting in job losses and salary cuts.

Shedding light on readers’ behaviour vis-a-vis the Covid outbreak, the report further says that the pandemic has helped rebuild a little of the confidence lost in the media and pushed news companies even more towards digital.