India has overtaken China to become the world's fastest growing economy by clocking 7.5 per cent GDP for the March quarter, prompting Finance Minister Arun Jaitley to say that the economy is clearly on "a recovery path". 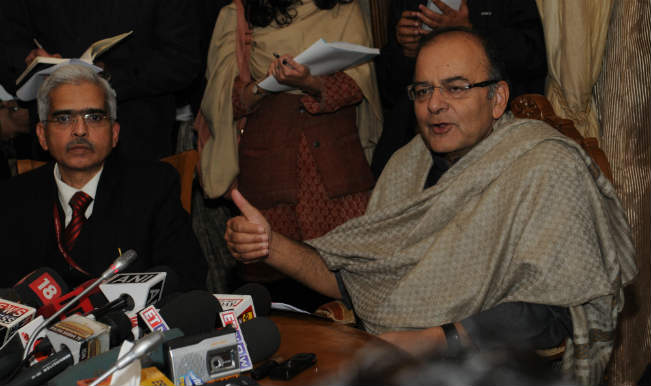 New Delhi, May 29: India has overtaken China to become the world’s fastest growing economy by clocking 7.5 per cent GDP for the March quarter, prompting Finance Minister Arun Jaitley to say that the economy is clearly on “a recovery path”. The economic growth rate on sequential basis improved from 6.6 per cent in the third quarter (October-December) of the financial year 2014-15. For the fiscal as a whole, the GDP grew by 7.3 per cent, up from 6.9 per cent a year ago, mainly due to improvement in services and manufacturing sectors. Also Read - Centre Likely to Announce Another Round of Economic Stimulus Before Diwali: Report

The fourth quarter GDP data, Jaitley said, “gives us a broad idea of how the Indian economy is moving. It is absolutely clear that the economy is in a recovery mode”. The performance of manufacturing and services indicates that “we have a potential to grow at 8-9 per cent and beyond”, the Minister added. While manufacturing sector output grew by 8.4 per cent in the fourth quarter of last fiscal ended March 31, 2015, services sector including trade, hotels, transport and communications clocked a robust growth rate of 14.1 per cent. The fourth quarter GDP growth rate of 7.5 per cent was better than China’s 7.4 per cent making India the fastest growing economy in the world. Also Read - India Has Shown Remarkable Resilience In Fighting Virus, World Saw Our True Strengths: PM Modi

Jaitley dismissed former Prime Minister Manmohan Singh’s comments on the state of the Indian economy saying that an economy growing at fastest pace in the world cannot be ‘fragile’. “In a global slowdown situation, to have the fastest growth rate in the world certainly does not make Indian economy fragile,” he said. Industry chambers hailed the uptick in growth data but underlined the need for more initiatives on the ground level to improve investor sentiment and realise the true potential of the Indian economy. (Also read: Arun Jaitley for giving power to consumers to file class action suits)

Finance Secretary Rajiv Mehrishi said improvement in the manufacturing sector growth shows that jobs are being created. Industry chambers, meanwhile, made a case for further rate cut by the Reserve Bank at its monetary policy on June 2 in view of declining inflation. “Inflation, which was a major concern factor, has been on downward trajectory. We hope that Reserve Bank will cut the repo rate by 50 bps,” said Ficci.

Industry body CII said the figure indicates that policy and reform initiatives taken by the government are bearing results on the ground. “We expect further improvement of the key levers of the economy, going forward, as the government steps up public investment which in the process crowds in private investment to rekindle a new demand cycle in the economy,” it said.

The economic growth rate measured in terms of GVA for the January-March quarter improved to 6.1 per cent as against 5.3 per cent a year ago. The manufacturing sector recorded a growth rate of 8.4 per cent during the last quarter of the last fiscal, up from 4.4 per cent a year ago. The services sector too witnessed marked improved during the quarter. However, agriculture and mining and quarrying sectors remained laggards in the January-March quarter. The data showed that farm output during the quarter declined by 1.4 per cent as compared to a growth of 4.4 per cent in the corresponding quarter of the previous fiscal.