Deadline Alert! Linking PAN to Aadhaar card by March 31: Here's how to link your PAN and Aadhaar cards online at incometaxindiaefiling.gov.in as well as through SMS. The Narendra Modi government had been demanding linking PAN and Aadhaar but it hit a roadblock after it was found that individuals used their names in a different manner on the two different documents.

Penalty of Rs 10,000 will also be imposed on those who don’t link both PAN-Aadhaar card within the deadline. Also Read - How Many Muslims, Dalits? UIDAI Has Not Followed Rules: Asaduddin Owaisi on Notices to 127 People

To keep a check on such fraudulent activities and make it easy for taxpayers to link their PAN with Aadhaar, the Income Tax department has launched a new e-facility. An individual can now link his/her Aadhaar with PAN card in just 3 simple steps. Linking Aadhaar to PAN card is now a mandatory procedure for filing IT returns. The departments e-filing website has created a new link on its homepage making it “easy” to link the two unique identities of an individual. Also Read - Aadhaar Card Has Nothing to do With Citizenship, Authorities Say After Issuing Notices to 127 in Hyderabad

How to link PAN card to Aadhaar card in three simple steps: 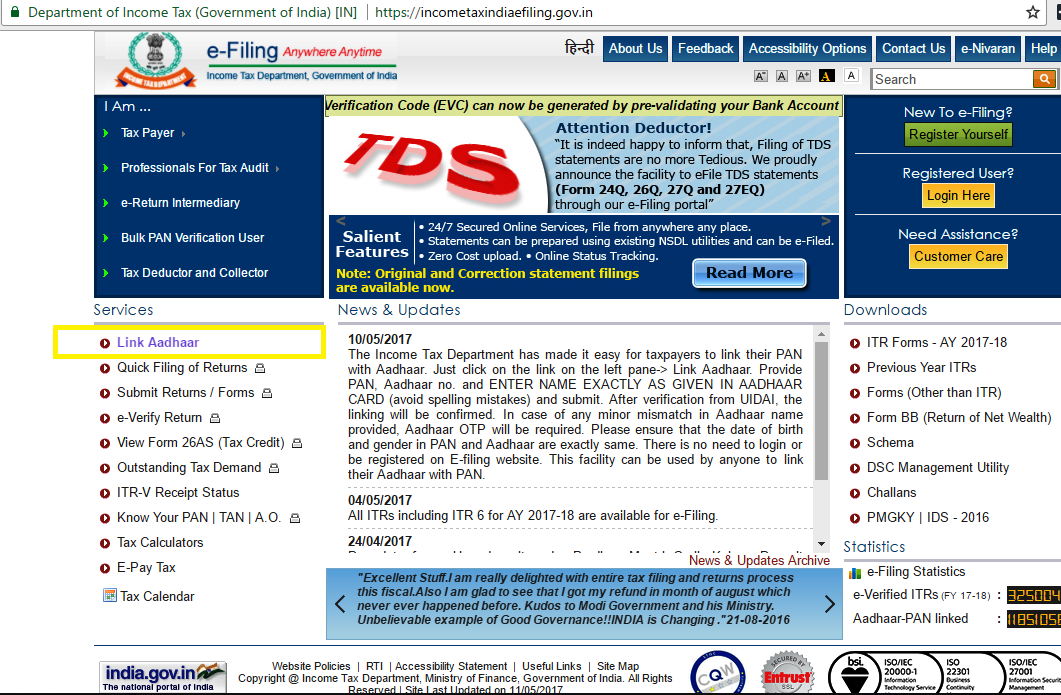 2. After clicking on Link Aadhaar, a new page will open where you need to provide PAN, Aadhaar card number. You have to make sure that you enter the name exactly as given in the Aadhaar card. One should avoid making spelling mistakes. Once you fill the details, click on submit.

3. After verification from UIDAI, the linking will be confirmed and it will display Aadhaar-PAN linking is completed successfully.

Step 2: On the homepage, click on the ‘Link Aadhaar’ tab.

Step 3: New users should register to open a tax account.

Step 4: Fill in all the required credentials including your name, your Aadhaar and PAN numbers.

Step 5: Enter the right captcha code. Those who are visually-impaired have the option of receiving OTP while registration.

Step 6: Now click on the ‘Link Aadhaar’ icon. Your PAN and Aadhaar cards will be linked.

Link PAN with Aadhaar by sending an SMS

Also, one can link PAN with Aadhaar  by sending an SMS to 567678 or 56161 from the registered mobile number. To link, you need to type UIDPAN and send it to the given nuber.

If there is a minor mismatch in Aadhaar name provided by an individual when compared to the actual data in Aadhaar, One Time Password (Aadhaar OTP) will be sent to the mobile registered with Aadhaar, the press release by the Income Tax department mentioned.  The taxpayers should ensure that the date of birth and gender in PAN and Aadhaar are exactly same. In a rare case where Aadhaar name is completely different from name in PAN, then the linking will fail and taxpayer will be prompted to change the name in either Aadhaar or in PAN database.

There is no need to login or be registered on E-filing website. This facility can be used by anyone to link their Aadhaar with PAN. After responding to grievances of taxpayers regarding difficulties in linking PAN with Aadhaar their names did not match in both systems (Eg. Names with initials in one and expanded initials in another), the Department has come out with a simple solution now. Taxpayers are requested to use the simplified process to complete the linking of Aadhaar with PAN immediately. This will be useful for E-Verification of Income Tax returns using OTP sent to their mobile registered with Aadhaar.