Earlier on October 14, the top court had asked the Narendra Modi-led Centre to implement "as soon as possible" interest waiver on loans of up to Rs 2 crore under the RBI moratorium scheme in view of the COVID-19 pandemic saying the common man's Diwali is in the government's hands.

New Delhi: In the backdrop of the Supreme Court’s direction to implement the interest waiver scheme, the Ministry of Finance has announced a waiver of interest on interest for loans up to Rs 2 crore irrespective of whether moratorium was availed or not.  The Department of Financial Services on late Friday night issued operational guidelines, giving relief to borrowers at the onset of the festive season.Also Read - Loan Moratorium: SC Rejects Plea Seeking Direction For Banks to Count 90 days For NPA Declaration From Mar 23

Earlier on October 14, the top court had asked the Narendra Modi-led Centre to implement “as soon as possible” interest waiver on loans of up to Rs 2 crore under the RBI moratorium scheme in view of the COVID-19 pandemic saying the common man’s Diwali is in the government’s hands. Also Read - Loan Moratorium: Supreme Court to Pronounce Verdict Today on Pleas From Trade Associations 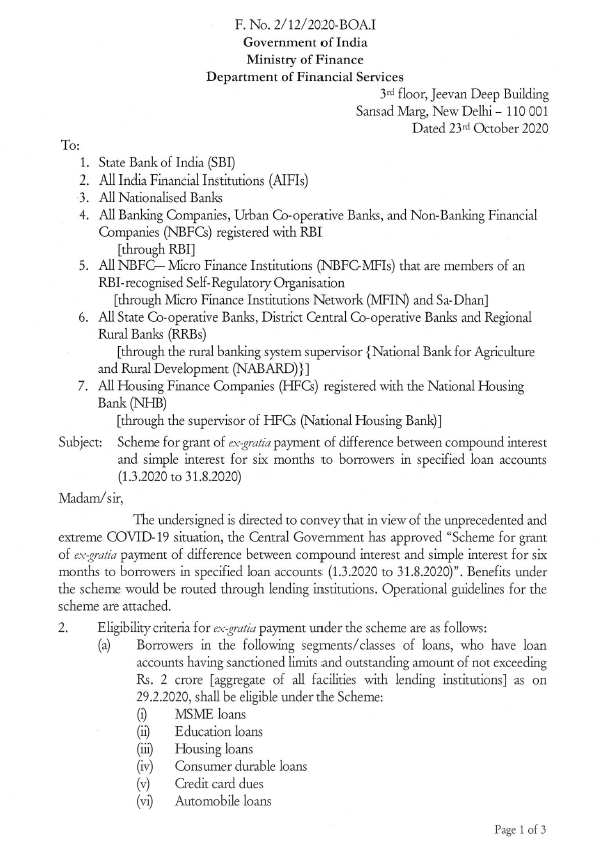 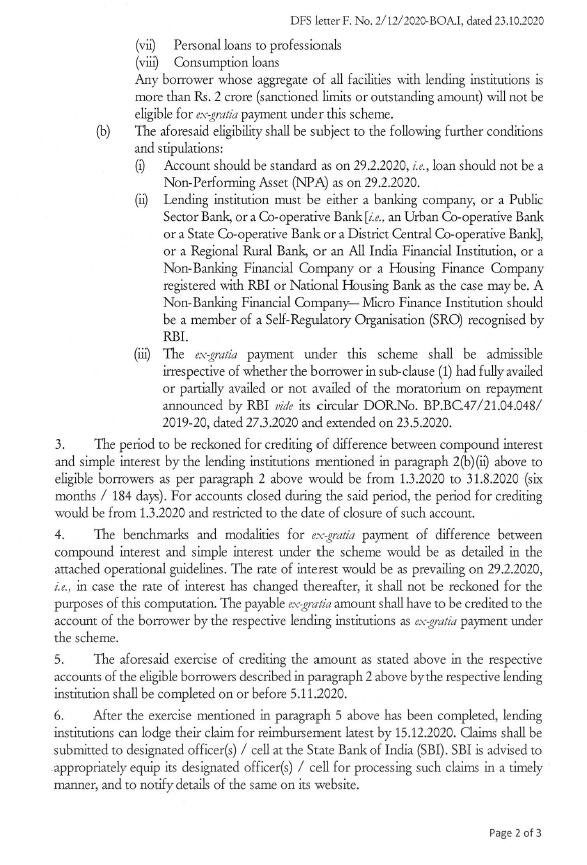 Here are the top 10 points in this big story:

-As per the government’s guidelines, the scheme can be availed by borrowers in specified loan accounts for a period from March 1 to August 31, 2020.

-“Borrowers who have loan accounts having sanctioned limits and outstanding amount of not exceeding Rs 2 crore (aggregate of all facilities with lending institutions) as on February 29 shall be eligible for the scheme,” it said.

-According to the eligibility criteria mentioned in the guidelines, the accounts should be standard as on February 29 which means that it should not be Non-Performing Asset (NPA).

-As per the scheme, the lending institutions shall credit the difference between compound interest and simple interest with regard to the eligible borrowers in respective accounts for the said period irrespective of whether the borrower fully or partially availed the moratorium on repayment of loan announced by the RBI on March 27, 2020.

-The scheme is also applicable on those who have not availed the moratorium scheme and continued with the repayment of loans.

-The lending institutions after crediting the amount will claim the reimbursement from the central government.

-Notably, the RBI had announced a moratorium on repayment of debt for six months beginning March 1, 2020, to help businesses and individuals tide over the financial problems on account of disruption in normal business activities. The six-month moratorium period ended on August 31.