LPG Price Hiked by Rs 25, Delhiites Have to Pay Rs 819 For a Cylinder | Check Rates in Your City

LPG Price Hike: The hike in the LPG comes at a time when petrol and diesel rates are touching record highs across the country.

New Delhi: After fuel prices, rates of domestic cooking gas has been hiked on Monday. Notably, several new rules come into effect from today under which the cost of LPG Cylinder has been increased by Rs 25 per cylinder. This is the third increase in the month of February itself. Earlier the prices were increased on February 4 by Rs 25 (cost: Rs 719) and February 14 by Rs 50 (cost: Rs 769) and now again on February 25 by Rs 25 to Rs 794 a cylinder. Also Read - Petrol, Diesel And LPG Prices to Drop Further in Coming Days, Says Dharmendra Pradhan

Following the latest hike, a 14.2 kilogram domestic LPG cylinder will cost Rs 819 in Delhi.  In Kolkata, it is being sold at Rs 845, highest amongst all metro cities. Mumbaikars will have to pay Rs 819 for a domestic LPG cylinder. Also Read - Cost of Domestic LPG Cylinder to be Reduced by Rs 10 From April 1, Check Price in Your City 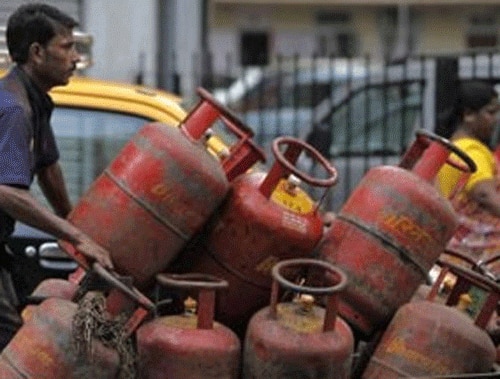 The hike in the LPG comes at a time when petrol and diesel rates are touching record highs across the country. While the practice of weekly or fortnightly price revision of cooking gas is normally done for non-subsidised cylinders, this year oil companies shave maintained almost equal increase in price of subsidised LPG cylinders as well.

This has equated its price with market prices of cooking gas and thus helping the government to completely eliminate direct benefit transfer (DBT) extended to cooking gas consumers.

Congress took a jab at PM saying with the LPG price hike, the public got another injection of rising prices on everyday commodity.

“Janta gets another ‘injection dose’ of Price Rise from BJP,” Jaiveer Shergill said in a tweet as cylinder price once again rises by Rs 25 making it the sixth consecutive rise in 2 months (cooking gas cylinder price rose by Rs 225 over past two months).