Make in India is Fake and Fail! Startups are not able to register their companies since months

The glitches in MCA website has come as a major embarrassment for the government. It nullifies the strenuous efforts taken by the Prime Minister to highlight the ease of doing business in India

New Delhi, April 26: Ministry of Corporate Affairs took a landmark step in mid-March by allowing entrepreneurs to adopt a one-stop solution to register their new companies. Registering a new firm was a hectic activity which involved at least ten days, if the founder was ready to run from pillar to post. But in order to promote its ‘Make in India’ campaign, the Narendra Modi government launched a new portal for corporate affairs, where one could register a new firm within a day, by simply uploading the required documents. Also Read - Paperless as Well as Visionless, Nothing For Middle Class: Here’s Who Said What on Budget 2021

However, far from creating ease of business, the MCA portal turned into a headache for the entrepreneurs. Although the Ministry hired the services of top IT firm Infosys, the portal is full of glitches and would leave the online user puzzled. (ALSO READ: Expect to resolve MCA21 glitches in next few weeks: Infosys) Also Read - TCS 3rd Most-Valued IT Services Brand Globally, Infosys & HCL Also Secure Spots in Top 10 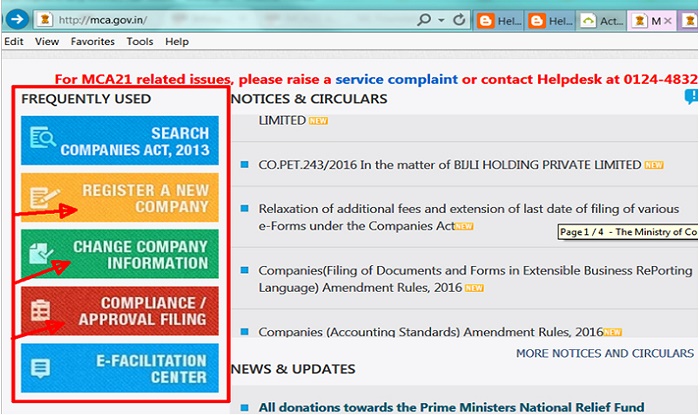 Not only is it impossible to start your company through the MCA portal, but it has turned into a painstaking task to upload the periodical documents.

Secretaries of major companies across India have started an online petition on change.org, demanding the central government to take action against Infosys for creating such a poor standard portal for MCA. They have also demanded the Ministry of Corporate Affairs to ensure that companies which were not able to file their documents on time, should not be penalized.

NITI Aayog CEO Amitabh Kant is also one among the petitioners, who has severely criticised Infosys for the glitches in the website. “I have cross-checked with secretary, corporate affairs. As a service provider, Infosys has let down the country,” Kant said.

The glitches in MCA website has come as a major embarrassment for the central government. It nullifies the strenuous efforts taken by the Prime Minister to highlight the ease of doing business in India. Due to this faux pas, ‘Make in India’ appears fake and fail. Since Startups are not able to register their companies since months, the credibility of Modi regime has been severely dented.