Airtel's new prepaid plans range from Rs 5 to Rs 399 that would help the telco retain all its customers. Take a look at what Airtel is offering under its new plans

Mumbai, September 4: In a bid to counter Reliance Jio’s disruptive offers, India’s telecom major Bharti Airtel has come up with latest recharge options for its prepaid customers. The new plans range from Rs 5 to Rs 399 and offer a number of freebies that would help the telco retain all its customers. Since the launch of Reliance JioPhone in July, there has been a major disruption in the telecom sector and a price war has been waged between all telcos in the Indian telecom market. In September last year, Jio brought a pricing revolution in the telecom sector by offering free voice call and low-cost data along with other freebies.Also Read - Airtel And Jio Internet Price Hike: Airtel And Jio Increase Prepaid Pack Price Up To 20-25%, Checkout New Prices Here 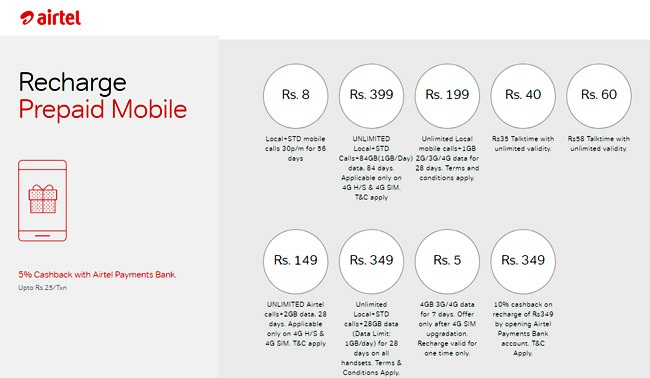 Here are the new plans launched by Bharti Airtel:

In the FYQ1 2017, Airtel reported 75 percent decline in its net profit at Rs 367 crore compared to Rs 1,462 crore in the year-ago quarter. Earlier this month, Airtel said it has sold 6.75 crore shares, about 3.65 per cent stake, in its tower firm Infratel for Rs 2,570 crore. The telco sold part of Bharti Infratel equity held through its wholly-owned subsidiary Nettle Infrastructure Investments Limited through a secondary share sale in the stock market, both at BSE and NSE. Also Read - Jio vs Airtel vs Vodafone Idea - Check New Prepaid Recharge Plans