Reliance Jio New 4G Plans Launched: Here’s All You Need To Know About New And Revamped Prepaid and Postpaid Plans

Reliance Jio's Dhan Dhana Dhan offers will continue, but there have been some changed in the validity and prices.

Mumbai, July 12: Reliance Jio on Tuesday announced revised tariff rates, to replace its dirt-cheap prices, as a part of its revamped Summer Surprise plan. The new plan was announced after Reliance Jio’s Dhan Dhana Dhan 90-day period came to an end on July 9. Reliance Jio while revamping earlier plans, has also added some other plans into the mix.

For example, contrary to the earlier offer of 1GB 4G data per day- for 84 days on first recharge- for just Rs 309, Reliance Jio is now offering 1GB data daily, but for only 56 days, but at the same price. Here are the revamped plans that were announced by Jio on Tuesday:

1. The Rs 309 and Rs 509 plans for Jio prepaid remain, but the validity period has been changed to 56 days. While the former plan has a cap of 1GB 4G data per day, by buying the second plan users can use 2GB 4G data per day, for 56 days. 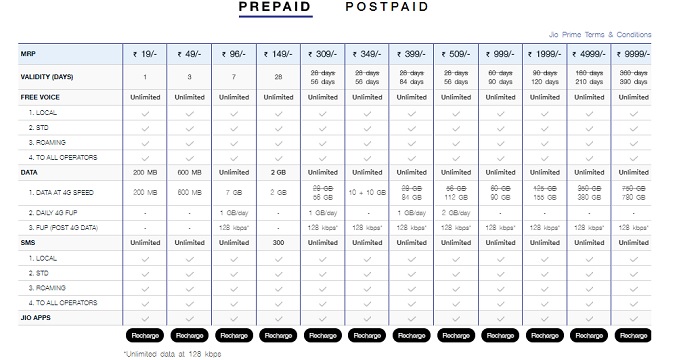 4. The new Rs 349 plan (under EDVM) will provide users with 20GB of 4G data, with no cap on per day consumption. After the whole data is used up, the speed will reduce to 128kbps.

6. For Reliance postpaid users, there are two plans- Rs 349 and Rs 399, with two and three months of validity respectively. Under Rs 349 plan, users will be given 20GB data with no cap, but speed reduction to 128kbps after data gets over. Under Rs 399 plan, users will get unlimited 4G data, but with 1GB per day cap, as well as unlimited voice and SMS benefits.

For prepaid users, the plans begin with as low as Rs 19 (valid for 1 day) and all voice calls are free in these plans. For prepaid, tariffs are inclusive of all taxes, but for postpaid, taxes are excluded in the cost. It should be kept in mind that to avail all the above offers as is, users have to be subscribed to Jio Prime membership, which has a one-time fee of Rs 99 per user. Needless to say, all these plans can only be availed by people possessing an LTE compatible device.

The effect of the new plans was visible on the stock market on Wednesday, when RIL stocks hit a fresh 52-week high. The stocks rose as much as 2 per cent in early morning trade today.